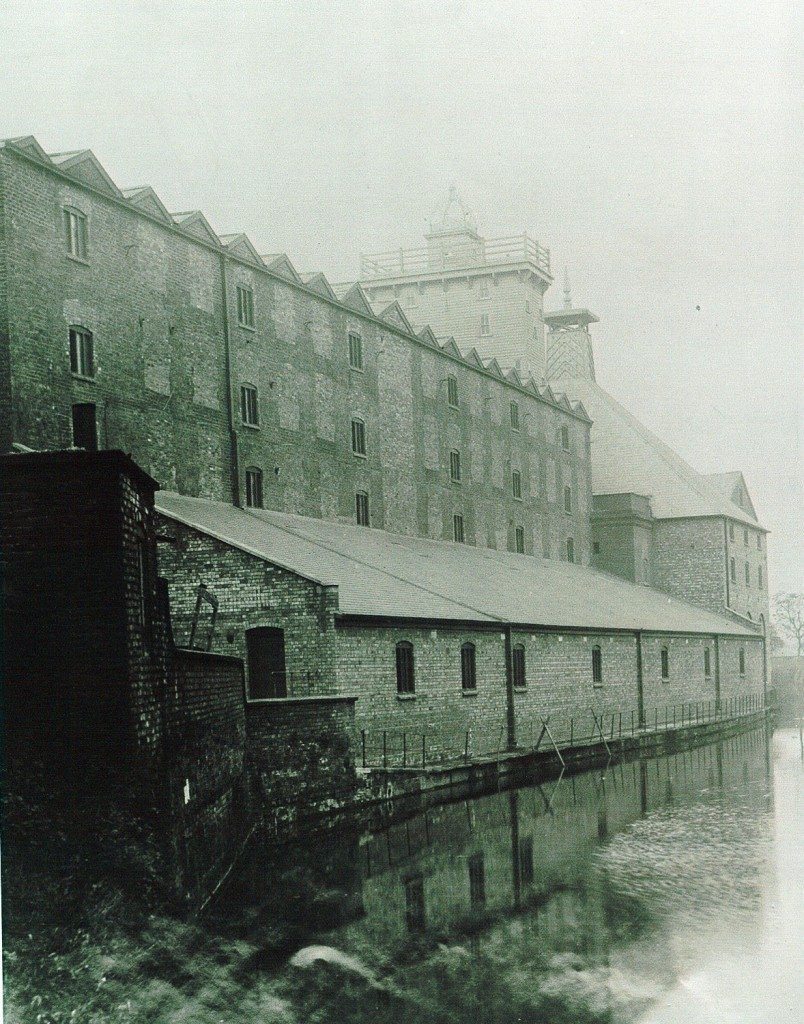 Image: View of the main mill from the east showing the Shrewsbury Canal and the single-storey building built by William Jones after 1896 when the building became a maltings.

Ditherington Mill was built in 1796-97 by a partnership, Marshall, Benyon and Bage to spin flax. John Marshall and Thomas (1762-1833) and Benjamin Benyon (1763-1834) were successful industrialists. Charles Bage (1751-1822) had a deep interest in the structural properties of iron. He designed the mill and was responsible for its innovative methods of construction. The hazard of fire was a common problem in eighteenth century factory buildings. They used candle light and inflammable materials in their production processes, so the partners aimed to create a mill which would be fire-proof. In 1796-1797 the use of iron as a construction material in buildings was not new, but Ditherington was the first completely iron-framed mill and became an ancestor of similar and larger structures that were built over the next two centuries. Ditherington is an early version of the modern skyscraper. It has outlasted the original purpose for which it was built.

A number of buildings were added to the complex after 1797. These included two iron-framed structures, the Flax Warehouse (1804-05) and Cross Building (1811-12). A new engine house was built in 1812 for a new 40 horse power engine. An apprentice house and clerks’ house were built outside the factory before 1800. In 1805 the blacksmith’s shop was built and a second apprentice house was constructed inside the mill complex in 1812. In subsequent years a number of alterations were made.  Although working-class terraced homes were built in streets next to the factory in the nineteenth century, there is little evidence that this was part of a strategy to provide accommodation for mill workers.

In 1896, Ditherington Mill was purchased by William Jones (1832-1923), a local businessman who adapted the buildings for malting. He added a huge malt kiln and replaced the steam engine boilers on the eastern side of the building with a single-storey structure which extended the floor space available for malting. William Jones and Co. went bankrupt in 1933-34 and was administered by the Alliance Insurance Company. In 1948, the building was purchased by the Birmingham brewers, Ansells, which in turn became part of Allied Breweries. Malting ended at Ditherington in 1987. Its huge size and unique construction have limited its potential for redevelopment.