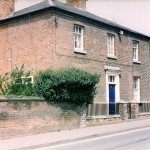 By 1800 a house for clerks employed at Ditherington Mill had been built by a Scottish migrant to Shrewsbury, John Simpson (1755-1815), who was employed as clerk-of-works at the newly built St Chad’s Church. Simpson subsequently worked with Thomas Telford on his civil engineering projects. He also built the first apprentice house near Ditherington. The house was built from the same bricks which were used for building the main mill of 1796-1797.