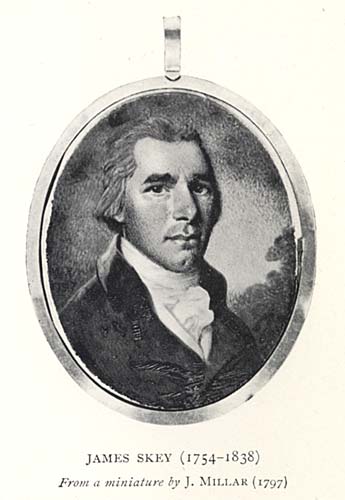 The Return of the Russells to England

One of William Russell’s friends in England, James Skey, went out to America in 1798 to marry Martha Russell. He, too, kept a detailed journal of the voyage, and his impressions of American life and manners.

Martha’s marriage to the twice-widowed Skey took place in Middletown on 13 December 1798, and in 1799 the new Mr and Mrs Skey returned to England. Two years later Mary Russell and her brother also set out for home, followed shortly afterwards by their father.

It is evident from the diaries that though they relished the adventure and experience of being in America, all the Russells missed the intellectual life of Birmingham and the regular contact with English society. Yet Mary’s account of the voyage home – in which she describes the high sails of the ship as ‘sky scrapers’ – is tinged with sadness, for her father could not return to England with them because England was still at war with France, and he owned an estate in Ardennes, the purchase of which had been negotiated for him by his Birmingham agent, Zacheus Walker.

There he now settled, spending his time reading the works of Erasmus Darwin, creating a garden and missing his daughters (his son Thomas having settled in Paris). William became a French citizen in 1807. That year William’s daughter Martha died, and in 1810 James Skey married her sister, Mary Russell. Skey lobbied politicians for his father-in-law to be allowed to return to England, which was finally permitted in 1814. William Russell spent the last four years of his life with his daughter and son-in-law at Upton-on-Severn, and was buried at St Philip’s, Birmingham, in 1818, 27 years after his home at Showell Green was destroyed by the mob.