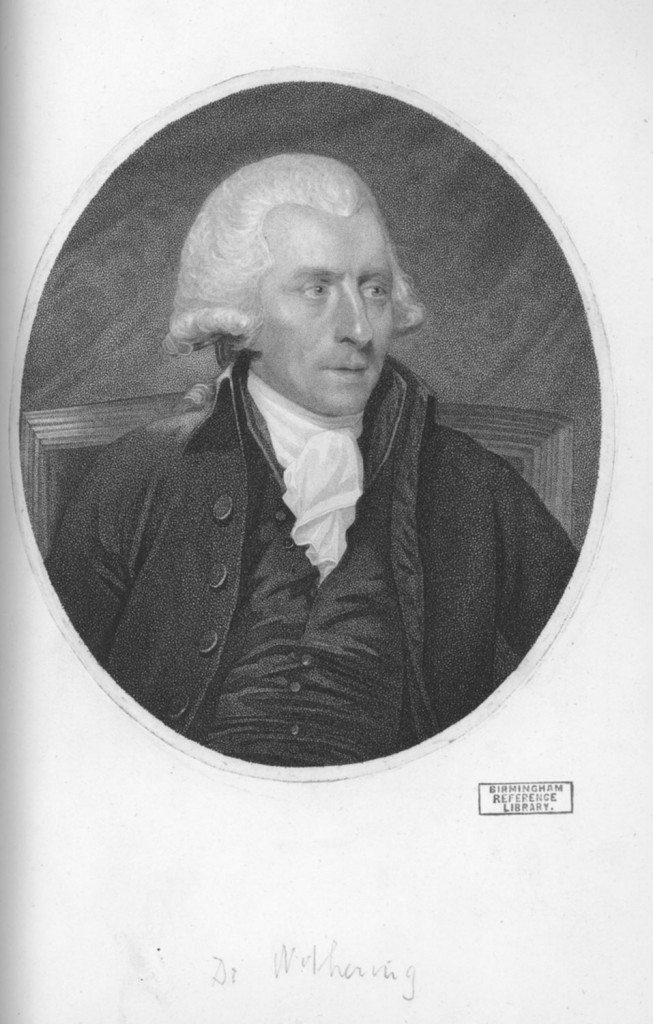 Image: Portrait of Dr William Withering from an engraving

Another of Withering’s lively female correspondents was Lady Catherine Wright of Teignmouth, Devon. She was the wife of a diplomat, Sir James Wright. Lady Catherine became a pupil of Dr Withering, in a sort of early “distance learning” project. In a letter to Withering dated 30 November 1784 Catherine outlines her early education. It seems to have consisted of little more than picking up crumbs of knowledge from her brother’s sympathetic tutor, who gave her “an earnest desire after Studies not suitable to my Sex”.

She then explains what led her to a love of chemistry. Her husband had bought a box of old books at an auction for the sake of one book he wanted. He had given her “the rubbish”, and she had found herself reading works on alchemy and chemistry from the previous century. From these she had progressed to modern authors, including Joseph Priestley. She was also developing what was clearly an evolutionary train of thought:

“I have found in my own mind a supposition that originally all Matter was one & the same in all things, the same Principles variously modified and harmonized, producing the different Class, Order, Genus, Species & Individuals of this Created World – & of Worlds unknown & beyond the limits of us finite beings to explore. If this position is false all my other fairy Dreams are so likewise…”

Withering was clearly intrigued and agreed to instruct Lady Catherine, sending her notes and questions to copy and discuss, reading lists, and instructions on how to lay out chemistry notes.

Catherine grumbled “That the Generalty of Men have Agreed that Women ought to be kept in perpetual Ignorance & the most profound Darkness, respecting every part of Literature beyond a Book of Cookery, is to be accounted for, & not greatly to be wonderd at” .

Having got that off her chest, her  first task was to define for her tutor “the six classes of Chemistry” (Saline, Inflammable, Metallic, Earthy, Watery, Aerial). She is, she says, “…rather more informd… of Many of the Species, than Women usualy are, for the most enlighten’d among us are indeed very poor in knowledge, it is but once in many Centuries that a Mrs Carter is produced. I have no right to hope that I can ever advance so far in Science as ever to become an Useful Member of Society….” Elizabeth Carter (1717-1806) had translated from Italian Algarotti’s Sir Isaac Newton’s Philosophy Explain’d for the Use of the Ladies (1739), and by the 1780s was widely regarded as one of the foremost female intellects; Catherine Wright clearly admired her.

In August 1785 Catherine was impatient to get on with experiments and plainly feeling thwarted:

We have in these parts a variety of Earths. I long to make some Experiments on them. But I must begin with purchasing an Hydrostatic Balance. I shoud be somewhat quicker in my proceedings, but a Married Woman cannot allways act just as she pleases. I dare say that is very right, & I have great indulgencies. Just now I wish to sit alone & thus converse with you but am obliged to quit Doctor Withering to attend on a set of unentertaining beings who will do me the Honor of a Visit. Sir James has also a Concert below stairs this Evening, at which I am likewise a Bad performer… You can scarcely figure to your self how cross I have felt lately, from being obliged to see much more Company than I ever wish to Mix in again….

In December 1787 Withering received a letter from Catherine which he annotated soberly, ‘Curious statements’, in which she referred to the fashionable idea of ‘animal magnetism’ and wrote teasingly:

“I was the other day in Company with a Practical Philosopher, who held this Animal Magnetism in great contempt. I lookd earnestly in silence at him to understand the better…. When on a sudden he insisted on my trying no tricks on him, for he knew that the simple looking at him, with an intent to affect him, woud be sufficient to give him spasms & make him extreamly ill… This declaration turn’d the laugh on my side intirely. If I was to tell you the Effects I have produced, or fancy I have produced (for possibly I do not Exist) you woud say God help her poor Weak Mind – I have not read Doctor Priestlys reasoning on Matter & Spirit at large, only Extracts in the Review… I met with a Philosopher lately of some Note who assures me, there is no such thing as either Matter or Spirit. I was almost tempted to stick a Pin in him….”

Catherine did not expect Withering to approve of “animal magnetism” (hypnotism), but recounted a demonstration she had witnessed, performed by a Doctor de Mainaude:

“…..a patient is so wrought on as to fall into a deep sleep, some are thrown into strong convulsions… When I was there, I saw such Extraordinary things happen that I do not venture to relate, because I think it impossible any one should give credit without ocular demonstrations. Several have been cured of Gall Stones…”

After this the correspondence between Catherine and Withering seems to have ceased. Perhaps he felt she was straying from the straight path of science into the realms of the fantastic.