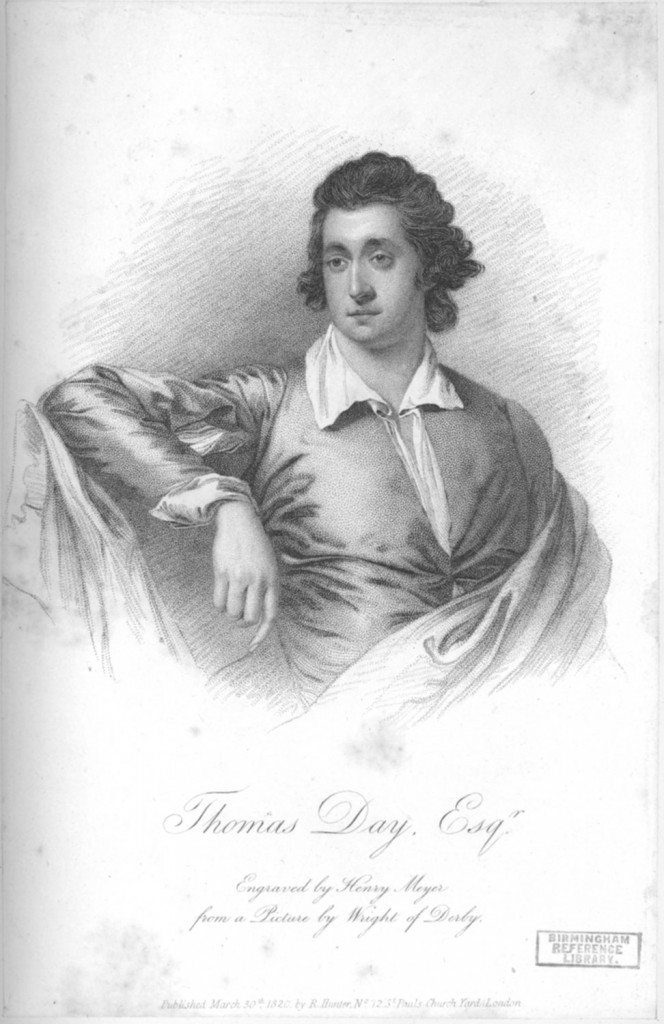 Image: Portrait of Thomas Day, an engraving based on a painting by Joseph Wright of Derby.

If Matthew Boulton seems to have favoured the traditional approach with his children, some members of the Lunar Society adopted more radical schemes of female education. We do not know what ideas Thomas Day had for Ann Boulton’s education, but he was an idealistic young disciple of Rousseau, who favoured freedom rather than strict discipline for children. Day disliked the way girls were brought up to think of little beyond frivolity and fashion. This made it difficult for him to find a suitable wife. He hit on the idea of adopting two young orphan girls, both of whom were to be trained and educated to take on the role of the future Mrs Day. His plan was to marry whichever of them proved most amenable to his training, and to apprentice the other to some suitable trade. He thought he could transform the girls into his image of the perfect wife – someone of high virtue and courage, with a taste for literature, science and philosophy, but with the simplest tastes in clothes, food and way of life.

The experiment was a failure – the girls were argumentative and liked pretty things. After a while he gave up on Lucretia; true to his word, she was apprenticed to a milliner. He persevered longer with Sabrina, but eventually abandoned hope of ever moulding her into the sort of wife material he was looking for, and sent her away to boarding school. Later she married his friend John Bicknell.  Day (who eventually married Esther Milnes, the daughter of a well-to-do Chesterfield merchant) wrote what was perhaps the first children’s best-seller, The History of Sandford and Merton, about Harry Sandford and Tommy Merton and their adventures and schooling – rather different from Harry Potter and Hogwarts Academy, but it went through many editions and remained in print for almost a century!