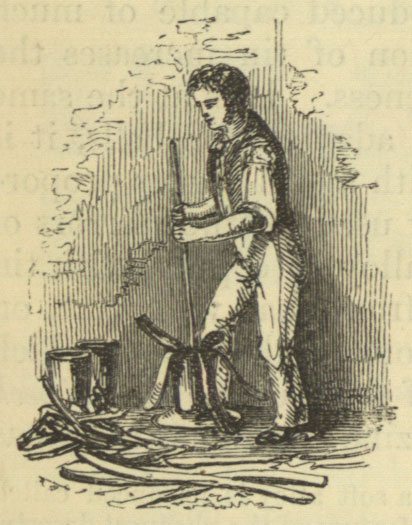 Caption: Image of a brassworker with a crucible from The Useful Arts and Manufactures of Great Britain, second part (London, SPCK, nd). Brass was originally made by cementing copper, calamine (zinc ore) and charcoal in a crucible to a red hot heat. Brass was formed when the spelter (zinc metal) and copper combined at the bottom of the crucible leaving slag behind. By the 19th century brass was manufactured by the direct fusion of copper and zinc. Zinc was melted in crucibles and copper was added to it. The two metals fused into an alloy. This in turn was allowed to cool, broken up and melted with an additional quantity of zinc.

2. The Origins of the Brass Industry in the Midlands and Birmingham

Early in 1700 an ancestor of Abraham Darby (of Coalbrookdale) and a Mr Lloyd (an ancestor of the founder of Lloyd’s Bank) established a brass works at the Baptist Mill on the River Frome near Bristol. Similar works grew along the river Avon, at Keynsham, Kelson, Salford, Weston and Warmley, all under the control of Joseph Loscombe and the Brass Works Company. Less than 20 years later the Cheadle Copper and Brass Company erected a smelting works at Bank Quay, Warrington. The first entry in the account book is said to read “Paid for ale to men digging foundations”.

In 1719 The Cheadle Copper and Brass Company at Cheadle, Cheshire was established with calamine stone being carried on the backs of mules from Derbyshire. According to a local ironmaster more than 30,000 individuals were employed in the brass trade in 1721.

Until the last quarter of the eighteenth century Bristol dominated the brass industry. It was both close to the raw materials – calamine from the Mendips, and copper from Cornwall – and there was a sufficient water supply to provide power. Bristol was also a major port, and its prominent role in the slave trade involved the brass industry. Wares, known “as guinea kettles” were taken to West Africa as part of the goods used for barter by slave traders.

Birmingham’s toy trade (items such as buttons, buckles, sugar, tongs etc.) required high copper alloys, pinchbeck and tombac. In 1738, William Champion of Bristol patented a method of producing zinc from calamine by the process of distillation, and this, together with further technical developments meant that the importation of foreign brass declined rapidly and Birmingham was taking a large amount of the sheet brass and ingots from Champions Brass Works.

By the time that Queen Victoria came to the throne in 1837, Birmingham had become the centre of the brass industry. The main factors were innovative practices, workforce skills, high demand and entrepreneurship. The social dimension of the industry is part of the history of Birmingham’s brass trade. Aspects include the organisation of the workforce, working practices and conditions and trade unionism.