Home·Browse·Entrepreneurship 1: Birmingham Brassfounders and the Building of the Brass House 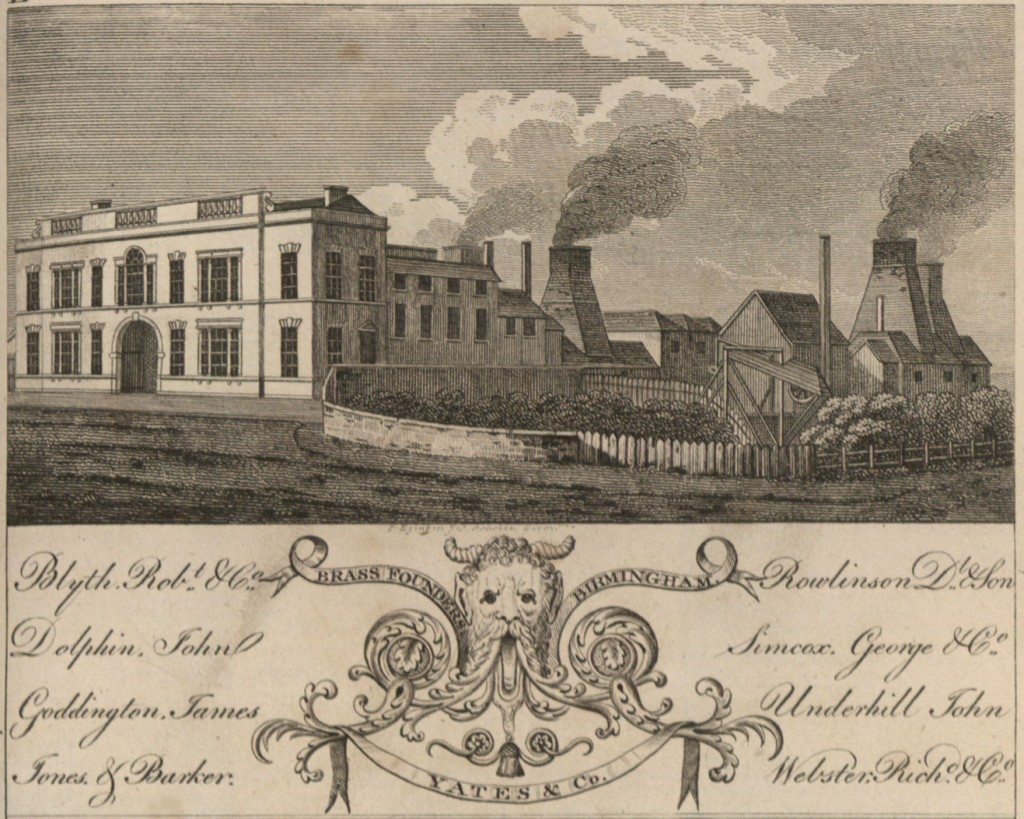 Image: The Brass House, Broad Street, Birmingham from Bisset’s Magnificent Guide, or Grand Copperplate Directory….(Birmingham, 1808). The Brass House was built in 1781 to manufacture the metal alloy in Birmingham and avoid the need to transport raw brass from elsewhere.

For most of the 18th century, brass was brought from Cheadle and Bristol to Birmingham. It was deemed more economical to bring in the alloy itself from far afield than bringing in the raw materials. However, matters came to a head in 1780 when the price of brass was increased by £12.00 per ton.

Between 1771 and 1780, production of copper, the chief component needed for the production of brass fell from 3,347 tons to 2,932 tons. Consequently, the price of brass supplied to the brassfounders rose from £72 per ton to £84 per ton. This vastly increased the potential profits of the brass manufacturers (by up to 25%) whilst drastically reducing those of the brassfounders. A meeting of the chief brassfounders of Birmingham was held at the Swan on Bull Street on the 29th August 1780, at which it was decided to increase the price of brassfoundry goods by 7½%. Birmingham’s brassfounders wanted to become independent of the manufactories of Bristol and Cheadle, and, on the 9th October 1780, a “serious address to Birmingham merchants and manufacturers of hardware” was published in Aris’s Gazette. It opened in a congratulatory tone to Birmingham’s past industrial achievements “… you have surprised all Europe in Invention and Executions. You have sought honour and profit, and it has been found in every Quarter of the Globe … your competitors … watch every opportunity to share with you a trade they cannot equal”.

The writer of the address, whom Aitken suggests was Matthew Boulton, urged the brassfounders to build their own smelting and brass houses to gain independence from the existing brass makers, asking “… shall so Respectable a Body of Merchants and Manufacturers become the Dupes of a set of Capricious Monopolists in the articles of brass and spelter on which their trade depends? … be no longer governed by Strangers when you have the power to help yourselves at home.”

A few weeks later, on the 21st November 1780, the same writer placed an advertisement in Aris’ Gazette inviting Birmingham’s brassfounders and merchants to “… deliberate upon a plan … to relieve yourselves from the Imposition of a set of mercenary men whose machinations manifestly tend to the Injury of the Trade of your Town and Neighbourhood.” The decision was made to raise a fund, divided into shares to which every founder and merchant should subscribe. With subscriptions of £20,000 the Birmingham Metal Company was formed on the 2nd February 1781.

The network of canals around Birmingham was established by this time making the transportation of raw materials both quicker and cheaper. The headquarters of the new company, The Brass House, was erected in 1781 “by ye canal” in Broad Street with “… corpulent tunnels or tapering chimneys which reared behind, under each of which were two furnaces”. Soon the price of brass fell from £84.00p per ton to £56.00p per ton, thus further increasing the presence of the trade in Birmingham. The last of the six tapering chimneys was demolished on 27th January 1866 and all that remains of the building is the name of the thoroughfare “Brass House Passage”.