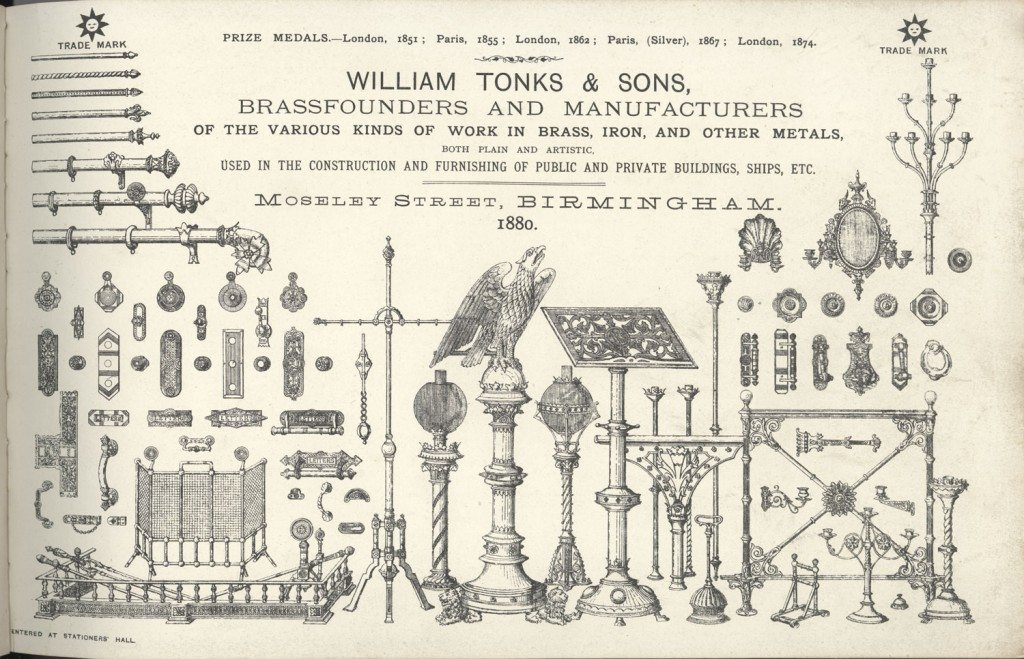 Caption: First page of William Tonks, Sons & Co., Catalogue of the Various Kinds of Work (1880). The image shows the variety of products made by this firm of brassfounders in Moseley Street, Birmingham. Items range from relatively simple items of door furniture to a church lecturn. They show how extensive the skills of workers in the local brass industry had to be.

The skills within the brass trade cannot be understated. Casting needed the application of both manual dexterity and scientific knowledge. The rising demand for church furniture and artefacts in the 19th century, as well as the revival of metal art and crafts, tried the skills of the workers. The production of an eagle for a church lectern required a mould made up of 25 separate pieces. Braziers wrought intricate patterns on many of the goods they produced, but, by the nineteenth century, their work had been taken over by machine stamping.

The flexibility of Birmingham’s workers was renowned. Writing in 1865, Aitken suggests that these characteristics were “… hereditary, transmissable and transmitted from sire to son … thus there is a tendency to perpetuate a special qualification for the manipulation of metals”. With its firm connections with the iron trades the adaptation to brass was relatively straightforward as both are polished by abrasion or friction, and methods of fitting together the moulded articles are the same. Aitken was confident of the future of the brass trade in Birmingham where “…it found an almost ready trained class of artisans prepared to deal with it”. Although Birmingham cannot claim credit for the introduction of brass manufacture to this country, within a few years of its appearance in the town Birmingham was responsible for a high proportion of the manufacture of articles in brass.