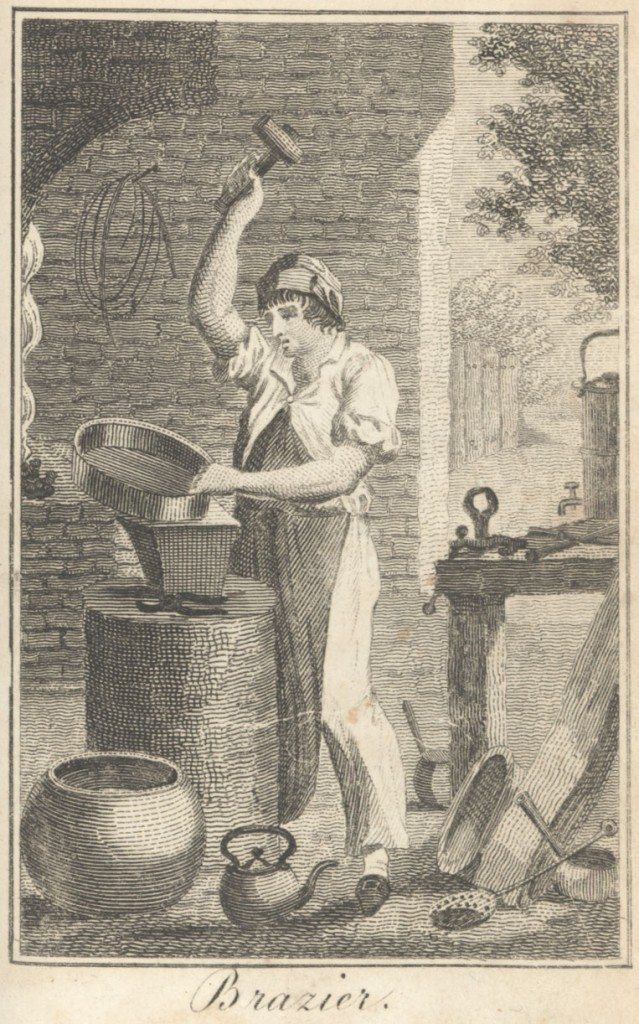 Caption: The brazier was one of the specialised workers in the brass trade. He made kettles, pails, candlesticks and kitchen utensils in brass. 17th century wills show that kitchen utensils were important items manufactured from brass during the early history of the industry. From The Book of Trades, or Library of the Useful Arts, part III, third edition (London, Tabart and Co, 1805).

Brass-making was known in Roman times where experiments took place to produce brass by heating calamine (zinc ore) and copper together. The earliest examples of brass to be found in England are monumental brasses dating from the fourteenth century – such as can be seen in Westminster Abbey, but these were made from brass imported from Flanders or Germany. The medieval industry developed there because of the availability of the two main resources for the manufacture of brass – calamine reserves and water. The latter was used to provide power to hammer the sheet brass into the finished items. These were sometimes referred to as “Flemish ware”.

During the reign of Elizabeth I a patent was granted to Christopher Schutz for the exclusive right of getting the calamine stone and working brass. He was described as a man “… of great cunnynge in ye mixed metal called latten or brass … and working ye same into all sortes of batterye wares, cast work and wyre”. Schultz was a Saxon zinc miner and, in 1568, two monopolies were granted concerning the brass trade. The first was to the Mines Royal Company for the mining and smelting of copper, and the second gave the Mineral and Battery Works the sole right to mine calamine and manufacture brass

Two Germans, Jacob Monima and Daniel Demitreus, established a brass works in 1649 at Esher, Surrey, with an outlay of some £6000, but this had gone out of business before the turn of the eighteenth century.

The Goldscope Copper Mine, near Keswick in Cumbria, was licensed to convert its copper into brass, and, by the outbreak of the Civil War in 1642, it had 4,000 employees. However, during Cromwell’s rule its smelting houses were destroyed and, although the workings were resumed by Dutch miners on the accession of William II, business ceased in 1715.

The brass trade relied heavily on skilled workers from the continent, and this, together with the crown monopolies, meant that a native industry was slow to develop. The passing of the Mines Royal Act in 1689 removed the crown monopoly on mining and brass production, which brought about renewed interest in the copper industry.

Despite the well known euphemism for “brass” to mean money and the statement of being “without a brass farthing”, which denotes poverty, the closest that Britain came to a brass regal coin was in the reign of James II. It was proclaimed in June 1689 that crowns, half-crowns, shillings and sixpences were to be made of brass and these became known as gun money because the brass came from old brass cannons, bells and kitchen utensils. Early wills and inventories often mention such items. The inventory of Nathaniel Moore, whitesmith of Deritend, in 1688, includes brass pots and brass candlesticks.