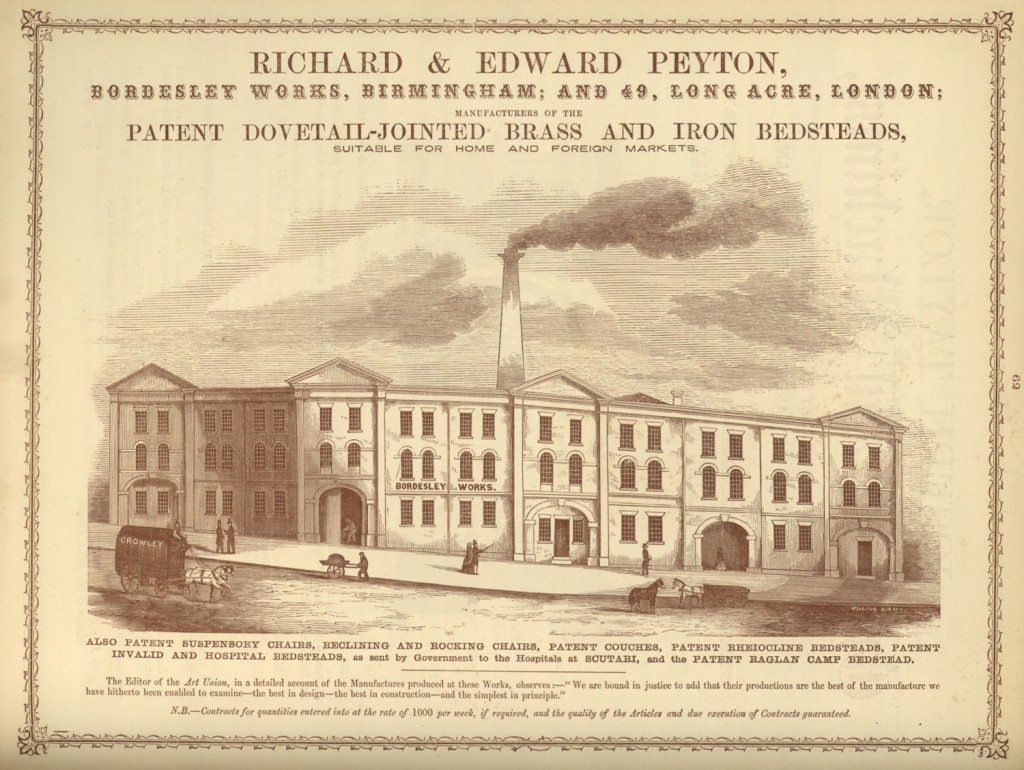 Image: Advertisement for Richard & Edward Peyton, Bordesley Works, Birmingham, Manufacturer of the Patent Dovetail-Jointed Brass and Iron Bedsteads, in the New Illustrated Directory entitled Men & Things of Modern England. (Birmingham, M Billing, 1858) p 62. Trade Directories are useful sources for the history of the brass industry, providing information on the location of businesses and lists of products. This advertisement is rare in that it provides an image of the place of production.

A search of the National Register of Archives for a specific company/business name should indicate the location of surviving records, but personnel records are few and far between for this trade.  Many local studies libraries also have ephemera and cuttings collections, which may include items relating to local brass works.  Local directories list businesses in the area and often contain full-page advertisements for larger concerns.  The original building may still be standing, but now put to a different commercial (or even residential) use.  If it has been demolished, a local studies library may have photographs or drawings of the buildings.

Many brassworkers served an apprenticeship and surviving indentures and other papers may be held at the local county record office or main library.  As well as being indexed by the names of masters and apprentices, there is often an index by trade to complement this.  It is possible that a parish apprenticeship was effected and in these cases, any surviving records can be found amongst the Overseers of the Poor accounts of the relevant parish at the Diocesan Record Office. It was not unusual for masters to take apprentices from parishes or institutions some distance away. Indentures for James Ford Banner of the Charity School, Bingworth, Worcestershire, dated 29th May 1800, indicate that he was apprenticed to William Mason, Brass Founder of Birmingham. This can be found in the Archives at Birmingham Central Library (DV 343)

The brass trade was competitive and most companies produced lavish catalogues of their goods.  These can usually be found in main libraries, county record offices, or, if the company is still trading, with the company itself.  Whilst these do not contain genealogical information, it is fascinating to see the types of articles a brass-founding ancestor produced.

Many of the larger foundries and manufactories published regular staff magazines, which may well provide details of individual workers. Many include obituaries, retirements, marriages, engagements and births as well as reports of sporting and social events.  They may also feature a history of the company or reproduce old advertisements.  In its Christmas 1968 issue, Conex-Sanbra of Sandwell published one of a series of company cameos detailing the work of the polishing shop, complete with snippets about the people who worked there.  Such magazines are generally deposited in main libraries, record offices or at the company’s offices.