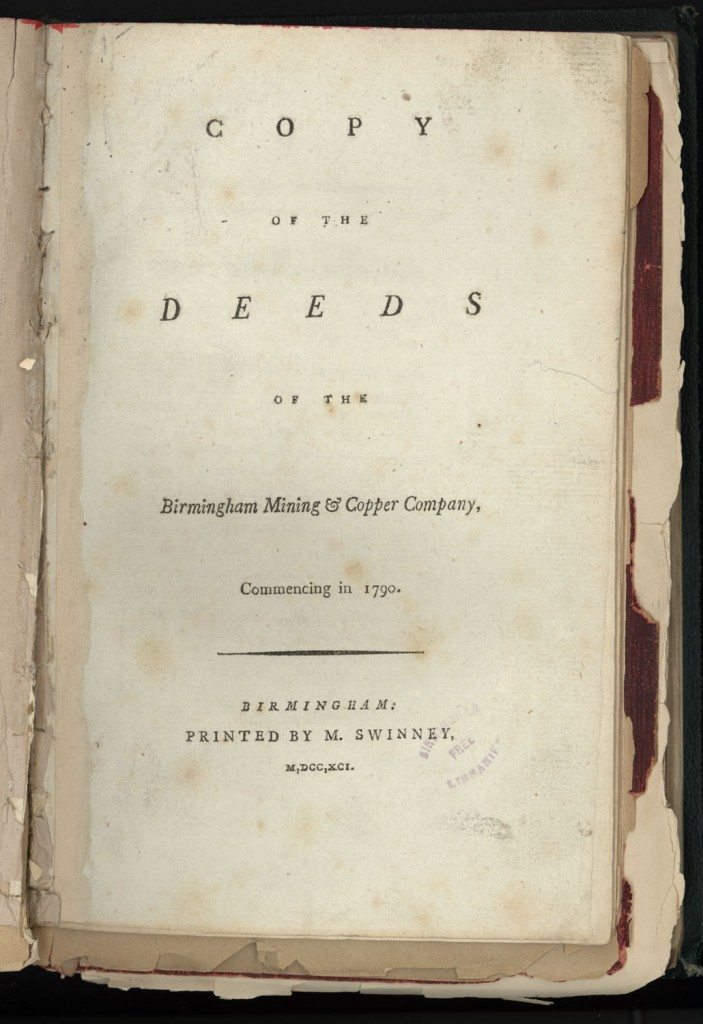 Image: First page of Copy of the Deeds of the Birmingham Mining and Copper Company. 1791.

William Hutton summed up the feelings against the brass manufacturers “Brass is an object of some magnitude … the manufacture of this useful article has long been in few and opulent hands, who … acted with despotic sovereignty, established their own laws, chose their customers, directed the price of and govern the market”

The establishment of the Birmingham Metal Company was not the end of the problems for Birmingham’s brass trade. In 1783, the brass companies lobbied Parliament for the repeal of certain old statutes which prohibited the export of brass. In response, brassfounders from Birmingham and other Midland towns petitioned that the export of brass would be detrimental to their trades, and, although the Bill, known as the “Brass Masters Bill” passed through the House of Commons, it was defeated in the House of Lords.

The combination of copper suppliers in 1785 further threatened the Birmingham brass trade, as this effectively provided a monopoly for the whole copper output of the country. It would not only affect the brass trade, but also all those requiring copper. Due to conflicting business interests various schemes to provide Birmingham with its own smelting works were scrapped, and, in August 1790, The Birmingham Mining and Copper Company was formed with a capital of £50,000, divided into 500 shares.  At this time it was estimated that consumption was between 1,500 and 2,000 tons annually.