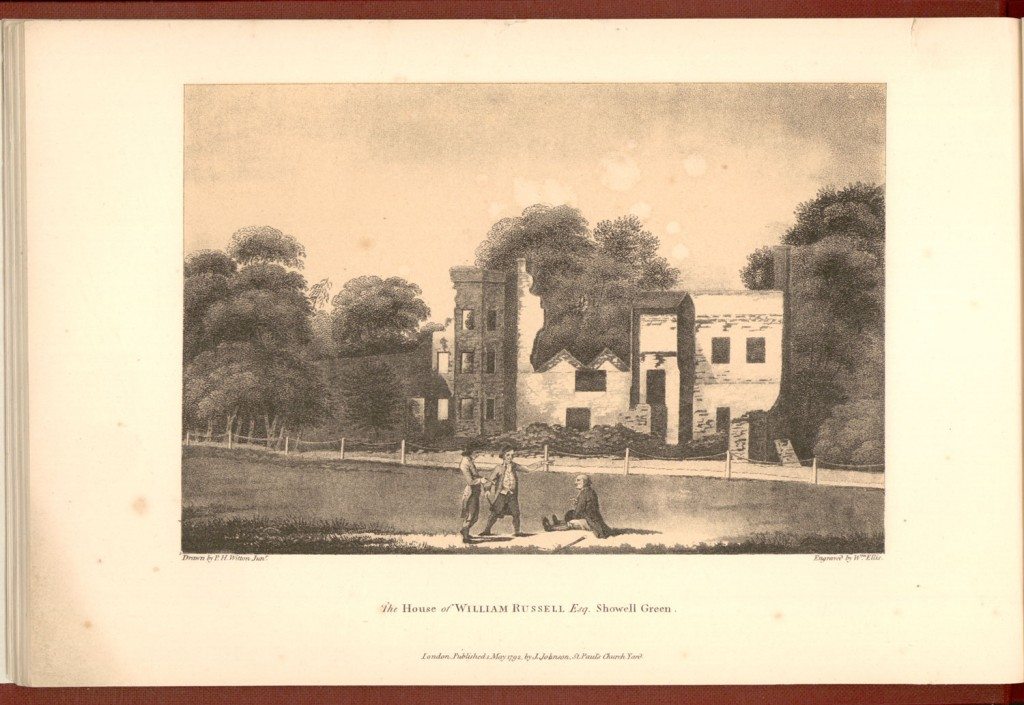 The Attack on William Russell’s House at Showell Green

Image: The House of William Russell, Esq., Showell Green from The Riots at Birmingham, July 1791. Image by courtesy of James Rushton. The publication was republished by Arthur Bache Matthews, Birmingham in 1863.

Priestley had fled Fair Hill when first news of the riots reached him and taken refuge in the Russell family’s, as yet, safe house at Showell Green. One wonders once again to what extent Priestley may have been prepared for this contingency.

According to Miss Russell’s account28, the sounds of the mob’s destruction of Fair Hill could be clearly heard by the terrified Russell and Priestley families, who had moved from the Showell Green house, now considered to be also under threat, to that of Mr Hawkes: “What were the emotions of our mind at this moment no one can imagine, unless they had beheld our countenances and heard the broken, short sentences that formed all the conversation that passed between us: yet the extreme agitation of our minds did not prevent us from admiring the divine appearance of the excellent Dr. Priestley”.

In the early hours of the morning, the Russells and Priestleys returned to Showell Green, where the house had seemingly been spared (it was to be destroyed on the Saturday evening). No sooner had Priestley and his wife gone to bed than word came that the rioters were stirring again from their drunken slumbers on the lawns of Fair Hill and were heading this way intent on getting their hands on Priestley. The dazed Doctor and Mrs Priestley had to get dressed again and set off in a chaise through the back-lanes south of Birmingham to the safety of a friend’s house near Dudley29.

So it was that one of the greatest men ever to have lived in Birmingham made his ignominious exit, never to return. A few days later he was in London, writing his famous letter to the inhabitants of Birmingham, which appeared in Aris’s Gazette on 25 July 1791. It ends: “At all events, we return you blessings for curses; and pray that you may soon return to that industry, and those sober manners, for which the inhabitants of Birmingham were formerly distinguished”30.