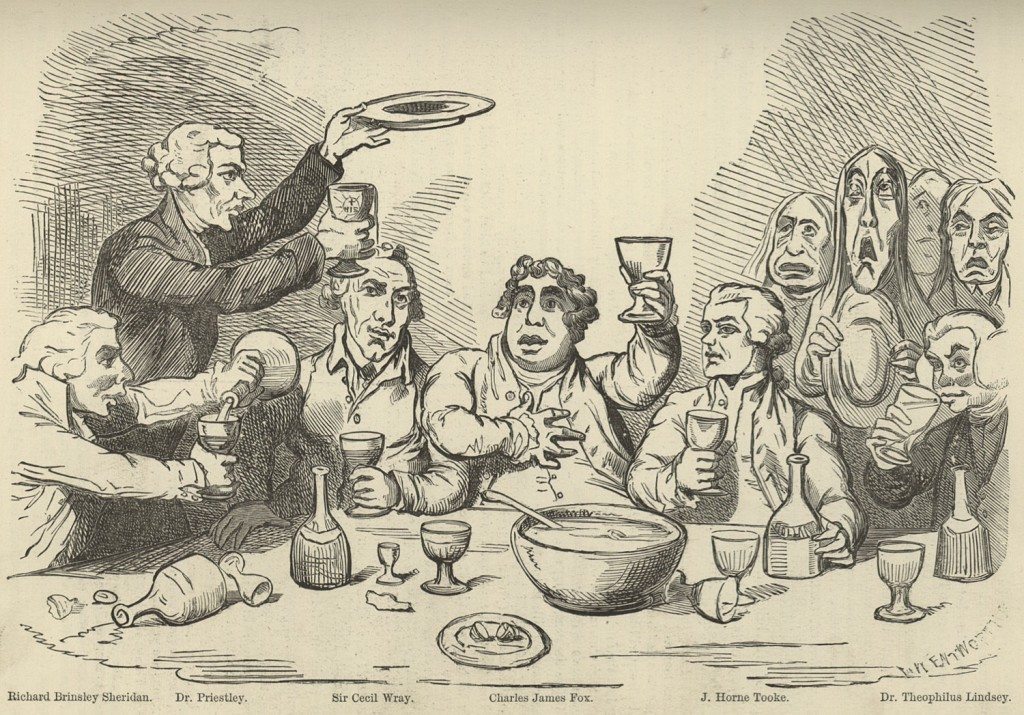 Image from: R.K. Dent, Old and New Birmingham: A History of the Town and its People(Birmingham, Houghton and Hammond, 1880), p. 215

One of the abiding national images of the Riots is a cartoon by leading caricaturist, James Gillray, showing Priestley and other well-known radicals, toasting “the King’s head on a plate”. It represents the “London” view of the Riots which so much of the Birmingham literature is designed to counter. The cartoon refers to the event that set off the riots – a “Gallic Commemoration Dinner” in Birmingham on 14 July 1791 celebrating the second anniversary of the storming of the Bastille. It is of course a satire and not meant to be what actually happened – most of the people identified at the feast lived far from Birmingham and had nothing to do with Priestley except for some shared political views – but two “inaccuracies” are more significant from a local perspective. First, Priestley, shown as the proposer of the toast, did not actually attend the Dinner, as explained below; secondly, his pose, raising plate and chalice aloft, is more reminiscent of a Catholic communion than a Unitarian service, and brings to mind that on at least two occasions during the Riots, the mob is recorded as chanting “No Popery” – did they even know what they were rioting against?

Priestley had fully intended to go to the Dinner and had even done his best to get others to attend19. But things had heated up considerably following an announcement of the event published in Aris’s Birmingham Gazette: “Any friend to freedom, disposed to join the intended temperate festivity, is desired to leave his name at the bar of the Hotel, where tickets may be had at five shillings each, including a bottle of wine”20 [clearly an 18th century use of the word “temperate”!]. This was accompanied by a statement that an attendance list would be published in a subsequent issue of the newspaper. The placing of this statement by the editor of the Gazette is seen by most Birmingham historians as a deliberate attempt to scare people off and is interpreted by Martineau21 as the first in a series of “conspiratorial” actions taken by the town’s “establishment”.

To make matters worse, a truly inflammatory handbill appeared in the streets at about the same time. It calls for “every Enemy to Civil and Religious Despotism” to “give his sanction to the Majestic Common Cause by a Public Celebration of the Anniversary”. It goes on to compare the recently overturned system in France with that still running England 22. The organisers of the Dinner were so determined to distance themselves from the handbill and its effect on the population that they published a second announcement in the Gazette on 13 July “to declare their entire disapprobation of all such Hand-bills, and their ignorance of the authors” and affirm their loyalty to “the Constitution”. Despite this, there was still the threat of violence against the participants and a third announcement was prepared, cancelling the Dinner; but at this point the owner of the Hotel, possibly concerned at the loss of trade, proposed a compromise – the Dinner should go ahead but finish early, before any potential rioters had gathered23.

At some stage during all this uncertainty, Priestley had decided not to attend, perhaps believing that, without him there, the Dinner could proceed in peace. He intended to spend a quiet evening in his home at Fair Hill, Sparkbrook.

19 His invitation to William Hutton and its refusal are recorded by Catherine Hutton, op cit, quoted in Dent, op cit, p. 225.

23 ibid (“Mr Russell’s Refutation of a fallacious Account of the Toasts &c given in a London Print, called The Times, at the late Gallic Commemoration Dinner at the Hotel, Birmingham; addressed to the Editor of the Star, a London Paper”), p. 20f.