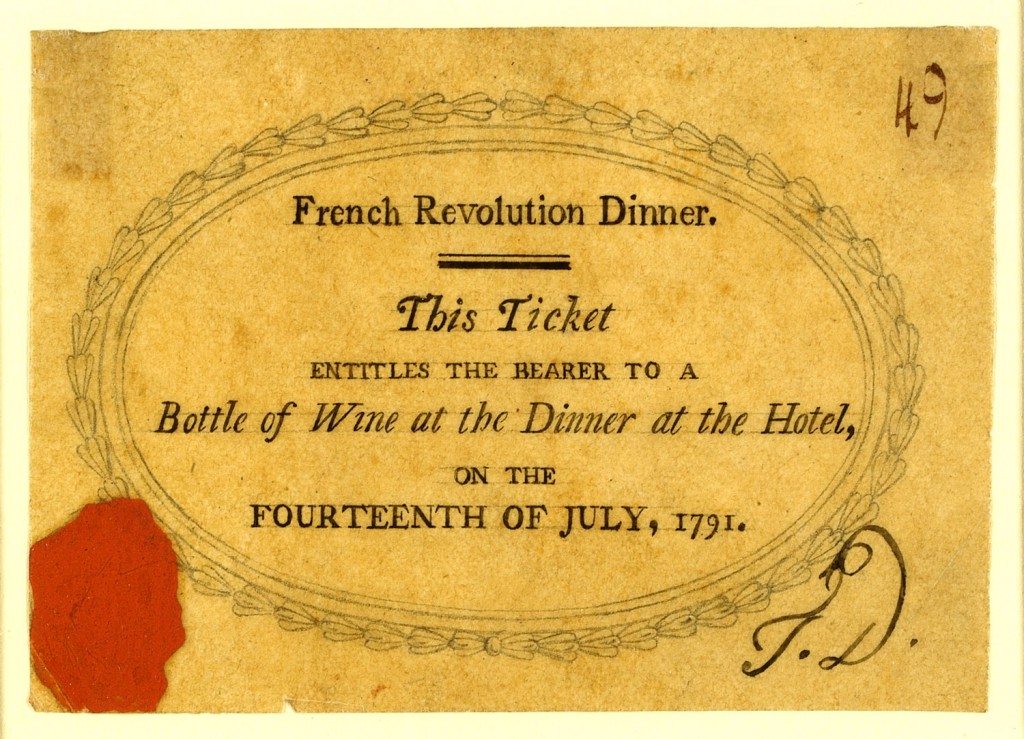 Image: French Revolution Dinner. This Ticket entitles the bearer to a Bottle of Wine at the Dinner at the Hotel on the Fourteenth of July, 1791. No 49. Initialled TD.

Somewhere between 80 and 90 men attended the Dinner. They drank no fewer than 18 toasts [so that’s why they needed a bottle of wine each!] including “The King and Constitution”, “The Prince of Wales” and “Prosperity to the Town of Birmingham” as well as, more controversially, “The National Assembly and Patriots of France”, “The New Constitution of France” and “The Rights of Man”. They also toasted republican movements in the United States and Poland. Nevertheless, it was far short of the seditious declarations reported in the London press, in response to which the complete wording of the toasts was later published24.

There had been some barracking of the diners as they entered the Hotel in Temple Row but it seemed that the hotelier’s plan had worked when they departed peacefully. It was only after they had gone that a mob gathered outside the Hotel, accompanied by the town magistrates, Joseph Carles and Benjamin Spencer and the Under-Sheriff of Warwickshire, John Brooke. The fact that these three had been drinking with members of the mob and were now mingling with them outside the Hotel is used by Martineau25as further evidence that they were manipulating the situation to attack local radicals and particularly Priestley – however, it could also be argued that this is precisely what they should have been doing in order to try and take control of the situation (later in the Riots, William Hutton’s son, Thomas, briefly won over the mob attacking his father’s shop and got them to march with him at their head to the rescue of Bordesley Hall – although they quickly switched sides and joined the attackers when they got there26).