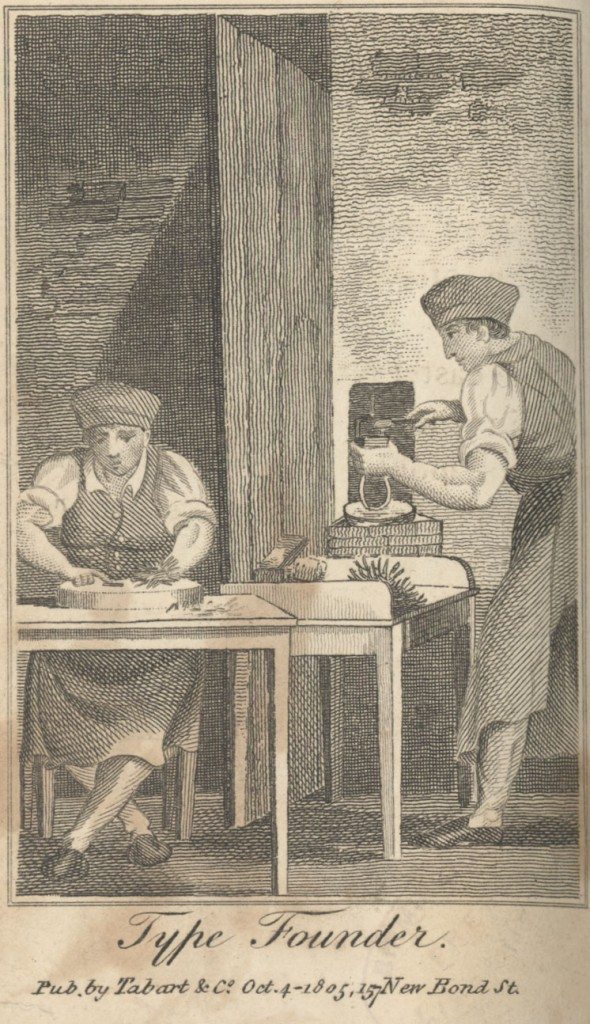 Image: Typefounding. The Book of Trades or Library of Useful Arts, Parts I, third edition (London Tabart and Co, 1806).

In 1724, the eighteen year old Franklin came to England at the first time, and spent a year and a half here, working first at Samuel Palmer’s, and than at John Watts’ printing-houses in London. Watts’ printing office in Little Queen Street, Lincoln’s Inn Fields, had almost 50 workmen and was one of the greatest printing establishments in London. Probably it was at this time that Franklin became professionally interested in the art of the typefounding. At that time there were no letter-founders in the American Colonies, so all types had to be imported. English printing had been changed little since the time of Caxton, and typefounding was dominated by casts made in Dutch foundries.

Franklin took the opportunity to visit the foundry of Thomas James (d.1738), who later would be called “the last of the old English letter founders”. James had a large collection of old English types, and it was at his foundry that a few years earlier William Caslon (1692-1766) had been encouraged to learn typefounding.

Franklin’s first stay in England coincided with the time when William Caslon was working on his types. Although he was inspired by Dutch examples, Caslon’s types would open a new era of modern English typefounding. D.B.Updike, a printer and the historian of printing types, remarks: “While he [Caslon] modelled his letters on Dutch types, they were much better; for he introduced into his fonts a quality of interest, a variety of design, and a delicacy of modelling, which few Dutch types possessed.”

Benjamin Franklin probably was familiar with Caslon’s enterprise, because it was partly financed by John Watts, Franklin’s employer. In 1720 Caslon set up his type foundry adjacent to the one at Oxford University. In a decade he had became Britain’s leading type founder.

Soon after his return to America in 1726, Franklin started his own printing house, but he still had to order Thomas James’ type face, because it was not until 1734 that William Caslon issued his first specimen sheet.

By that time Franklin had been appointed public printer for Pennsylvania. In 1737 he introduced for the first time Caslon’s types in his “Pennsylvania Gazette”. Soon large quantities of Caslon’s types crossed the Atlantic and gradually became the standard medium for the American colonies. Many printers took the advice: “When in doubt, use Caslon”.