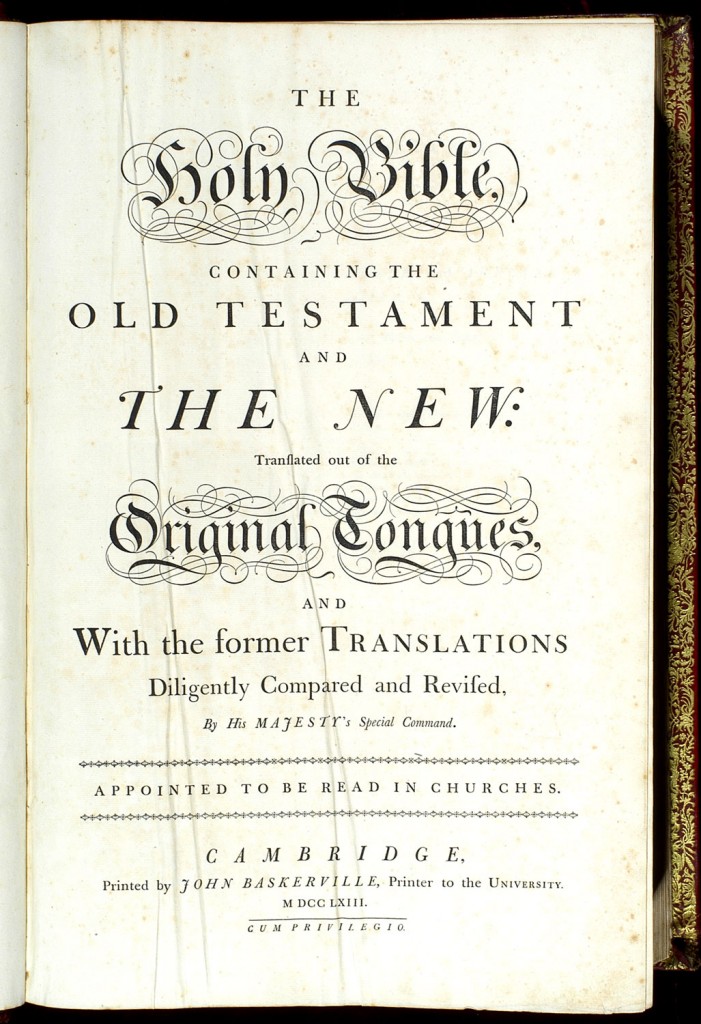 Image: Title page for Baskerville’s edition of the Holy Bible from the copy owned by Matthew Boulton. Baskerville was an agnostic and highly critical of organised religion, yet his Bible is frequently seen as his greatest achievement as a printer.

Neither Franklin nor Baskerville were orthodox believers. Franklin once remarked: “I think vital religion has always suffered when orthodoxy is more regarded than virtue”. Six weeks before his death he summed up his creed in a following way:

I believe in one God, Creator of the universe. That he governs it by his providence. That he ought to be worshipped. That the most acceptable Service we render to him is doing good to other Children. That the soul of man is immortal, and will be treated with Justice in another life respecting its Conduct in this. These I take to be the fundamental Principles of all sound Religion, and I regard them as you do in whatever Sect I meet with them.

Baskerville was an articulate and highly critical agnostic. The independence of his mind is shown in his will written in 1773:

I consider revelation…exclusive of the scraps of morality casually intermixt with it, to be the most impudent abuse of common sense. Which ever was invented to befool mankind. … The morality alone I profess to have been my religion and the rule of my actions to which I appeal how far my profession and practice have been consistent.”

Ironically, it was a Folio Bible, which would become the masterpiece of Baskerville’s press. And almost half of big books printed by Franklin, were books of psalms or versified Scripture. In 1745 he printed a New Testament. Produced cheaply on low-cost paper, it was not a beautiful book. This work was a financial failure, because the consumers probably preferred imported brighter English editions even if they cost a little extra. But in any case, it was the first English Bible printed in America.