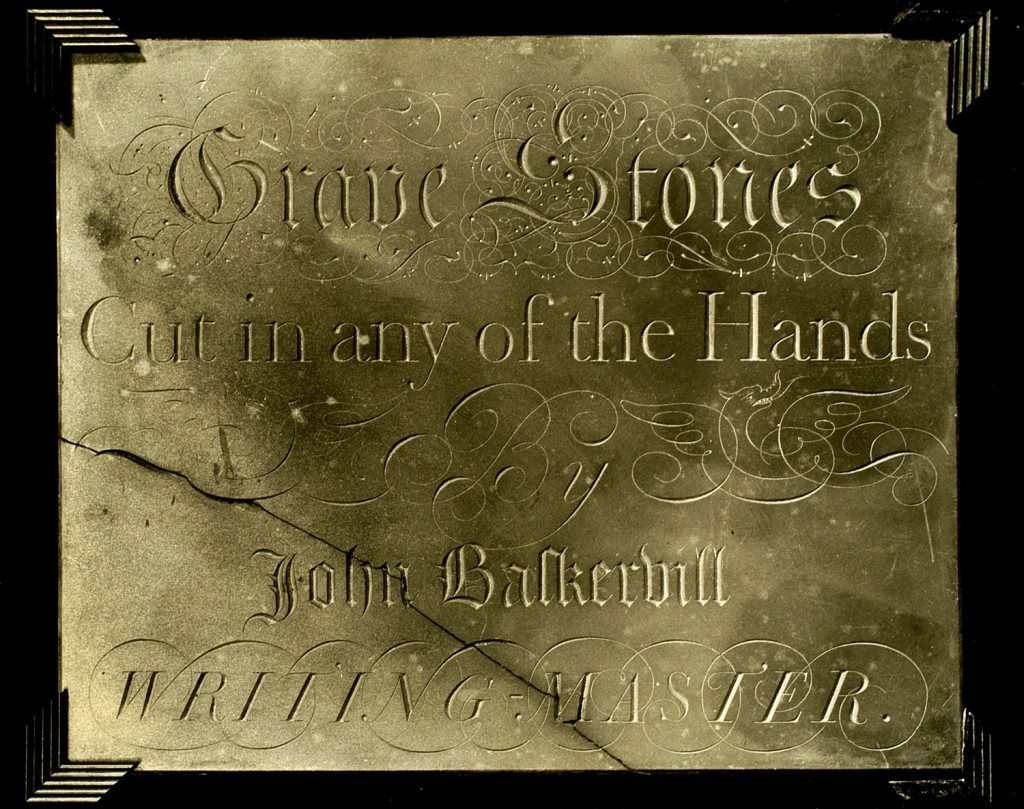 Image: Slate tablet advertising Baskerville’s works showing his skill as a designer of letters: “Grave Stone Cut in any of the Hands John Baskervill (sic), Writing Master, in Miscellaneous items relating to John Baskerville (1706-1775) from a scrapbook of letters, engravings etc., formed by Samuel Timmins.

Baskerville’s type was unlike anything that had come before it. Its rounded characters, the strong contrasts between thicks and thins, the careful proportions, and very fine sharp serifs clearly distinguished it from the old-style faces. They were also different from Caslon’s type. Baskerville had started his working life as a stone-cutter, so his style of lettering probably owed much to this background. In his design Baskerville clearly expressed the aesthetical ideas of neoclassicism and 18th century rationalism. In October 1752, in the beginning of his experiments in printing, Baskerville sent to R.Dodsley some impressions of letters he had designed and wrote: “Pray put it in no one’s power to let Mr Caslon see them.”

In 1758, Baskerville was working on his second book: Paradise Lost and Paradise Regained by Milton. Franklin certainly must have paid attention to the work of his fellow-printer, who wrote in the preface to the book: “Mr Caslon is an Artist, to whom the Republic of Learning has great obligation; his ingenuity has left a fairer copy for my emulation, than any other master. In his great variety of Characters I intend not to follow him.”

Franklin had been among the 513 subscribers for Baskerville’s first book printed in 1757 – the Bucolica, Georgica et Aeneis by Virgil. This book became an immediate success not only in Britain but even on an intercontinental stage. Among local subscribers were Matthew Boulton, Samuel Garbett and Samuel Johnson. There were subscribers from the whole of Britain, and from distant places, such as Berlin, Russia, South Carolina, Philadelphia and Barbados; “Ben. Franklin, Esq. of Philadelphia” subscribed to six copies.

He presented one copy to Harvard College; some others were given to Franklin’s friends who praised them highly. His Philadelphia friend Charles Thompson (1729-1824), the future Secretary of the Continental Congress, wrote in May 1758: “I just now saw one of the Virgils you sent over. It is a most charming Letter and neatly done. It is indeed an Edition worthy of Virgil. I have with Mrs Franklin’s leave taken one. I hope it will be agreeable to you. I shall now read Virgil with double pleasure.”

Another copy was sent to Isaac Norris (1701-1766), the Speaker of the Assembly of Pennsylvania. Norris was known as an excellent scholar in French, Latin and Hebrew and author of the inscription on the Liberty Bell: “Proclaim Liberty throughout the land unto all the inhabitants thereof.” Norris was so pleased with Baskerville’s Virgil that he requested Franklin to enter him as a subscriber to any other classics which Baskerville might produce in the future:

26 May 1758…Baskerville’s Virgil is certainly a curious performance of the Press for which I return my thanks to the Donor…Please to let me know whether Baskerville [has] any other Classical Authors in the same Letter and which of them that I may have an Opportunity of contributing my Mite to encourage such a curious and Ingenious Man as Baskerville who has done an Honour to the English Press.

Franklin certainly was impressed by what he saw at Baskerville’s press at Easy Hill. He subscribed to Milton and informed Norris that “Baskerville is printing Newton’s Milton in two Volumes, 8o. I have inserted your name in his List of subscribers.”