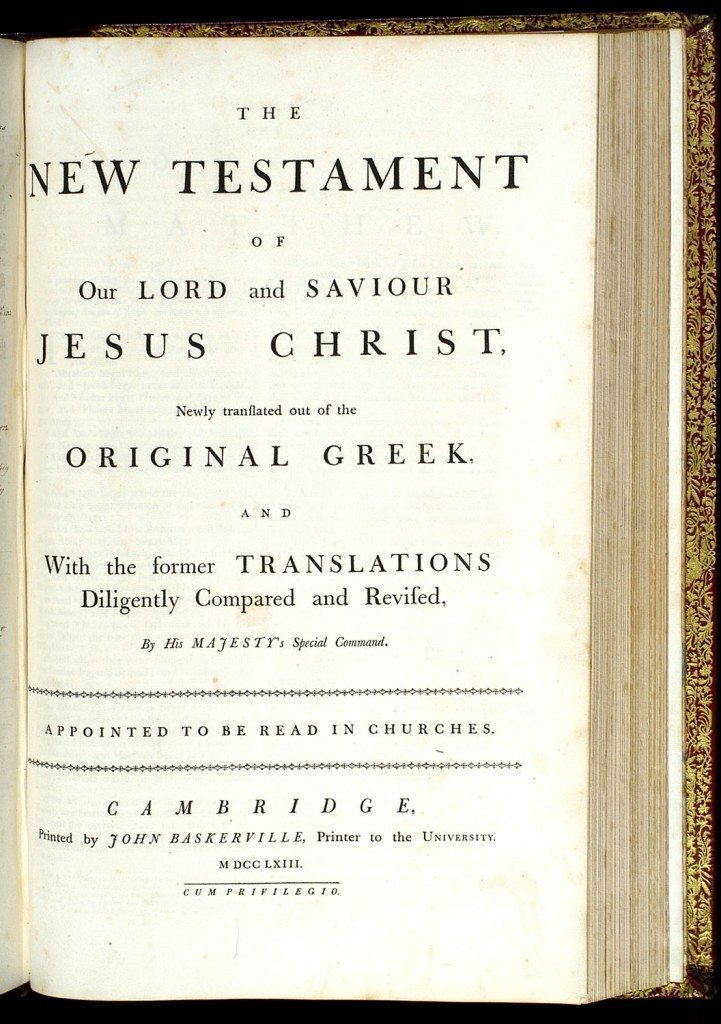 Image: Title page for the New Testament in Baskerville’s Holy Bible from the title page in Matthew Boulton’s Baskerville Bible. Franklin discussed the technical aspects of printing the Bible with Baskerville. This was one example of the technical co-operation between the two men.

This meeting of two fellow printers at Easy Hill, Birmingham in 1758, became the start of their close friendship and a long-lasting correspondence.

The following August 1759, Franklin travelled to Scotland. He probably again passed through Birmingham, so he may have called on Baskerville again. In Edinburgh, he met Adam Smith, William Robertson, Lord Kames, and Alexander Carlyle. At least two of these, Robertson and Carlyle, had visited Baskerville in 1758: “Baskerville was on hands with his Folio Bible at this time… He dined with us that day, and acquitted himself so well that Robertson pronounced him a man of genius.”. As both Franklin and Carlyle were subscribers to Milton, Baskerville’s work might well have been one of the subjects of their conversation.

Franklin had a commission from his partner to buy new type for Pennsylvania Gazette. It is interesting that in spite of his admiration of Baskerville’s type, he decided against buying it. The same decision he made in Glasgow, where he visited the foundry of Alexander Wilson (1714-1784), the major supplier of William Strahan. In the end, he bought the Caslon’s type.

Franklin and his son William again passed through Birmingham in late September 1760, after their stop-over in Coventry and before their journey through Wales to Bristol and Bath. By that time, four editions of Baskerville’s Milton had appeared, and at least two of the Book of Common Prayer, and Baskerville also had prepared specimen pages for the Bible. Franklin must have seen and discussed the work in progress.

For some reason, Baskerville’s works were much criticised by many of his English contemporaries, “probably because he did better work than other printers.”  His print seemed too dazzling, his strokes too narrow, and his paper too glossy. One of the most common claims was that Baskerville’s type would be “a Means of blinding all the Readers in the Nation”.

Although Franklin had not bought Baskerville’s type, he was eager to support him. In 1760 he wrote to Baskerville how he had enjoyed presenting a page set in the traditional Caslon to such a critic, saying it was Baskerville’s, and asking him to explain its poor points:

He went over the several founts, shewing me everywhere what he thought Instances of that Disproportion; and declared, that he could not then read the Specimen without feeling very strongly the Pain he had mentioned to me. I spared him that time the Confusion of being told, that these were the Types he had been reading all his Life, with so much Ease to his Eyes; the Types his adored Newton is printed with, on which he has pored not a little; nay, the very Types his own Book is printed with, for he is himself an Author; and yet never discovered this painful Disproportion in them, till he thought they were yours.”  Baskerville used Franklin’s letter for the advertisement of his Folio Bible in 1763.

Late in 1764, Franklin returned to England on his second mission, and spent eleven years here. During this period, Baskerville was again in regular touch with him. In one of his letters he wrote: “As the pleasantest Time o’Year for travelling is now approaching pray give us Your Company for a Month, and take a Bed at Easy Hill.”