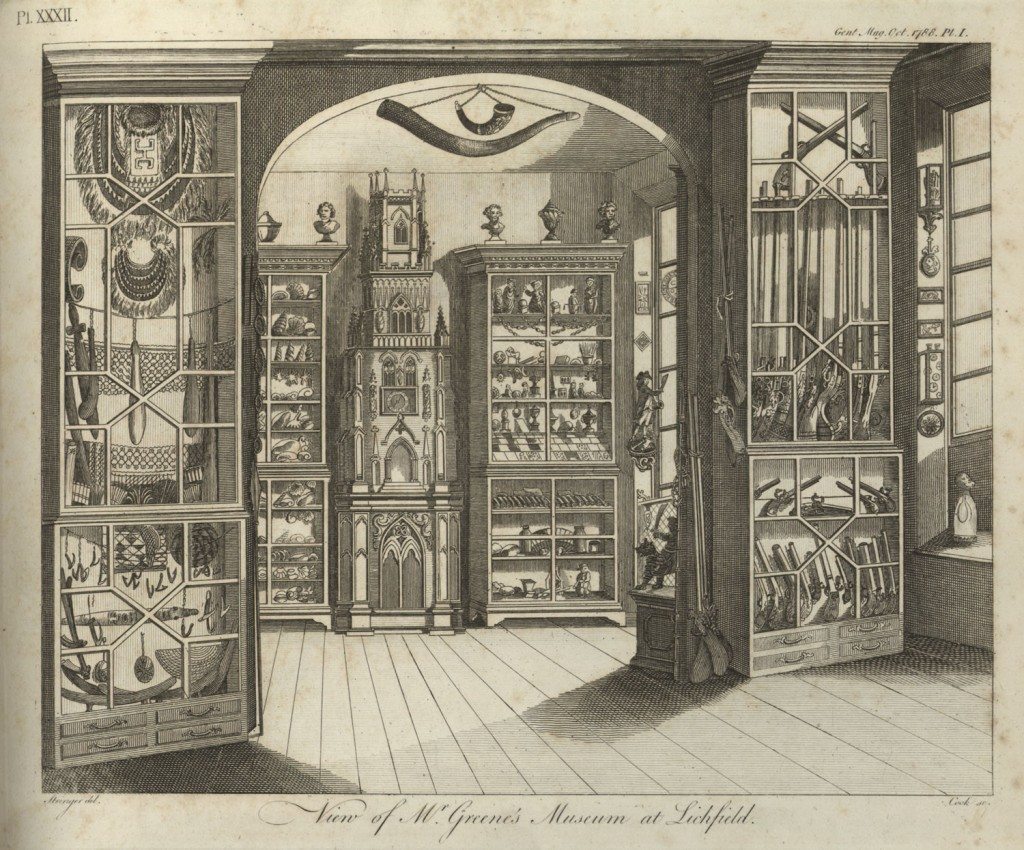 The Reputation and Importance of Greene’s Museum

In 1788 the Gentlemen’s Magazine published an article about Greene’s collection, accompanying it with an E.Stringer’s engraving in which the museum rooms are shown. It brought the museum to national recognition. Although Richard Greene was obviously much more eminent as a collector than as an apothecary-surgeon, his museum contained a number of medical machines, which probably would have attracted Darwin’s professional attention including:

An artificial Thorax of Glass by which is shewn the Action of the Lungs in Respiration.

A Machine for explaining the Circulation of the Blood, by means of a coloured Spirit in Glass contorted Tubes, invented by Signor Nicodemi of Florence.

A neat model in Mahogany of the double Ventilator invented by the late Dr Hales.

Dr Stephen Hales (1677-1761) was best known for his studies of the circulation of the blood and measuring blood pressure. His work on air gave him the idea of the danger of breathing ‘spent’ air in enclosed places, and he invented a ventilator which improved the survival rates on ships, in hospitals, and in prisons. Darwin shared Hales’ views on fresh air. His spontaneous speech addressed to Nottingham mechanics was preserved by Anna Seward:

You might not know that to breathe fresh and changed air constantly is not less necessary to preserve health that sobriety itself… If you would not bring infection and disease upon yourselves, and to your wives and little ones, change the air you breathe, change it many times a day, by opening your windows.

There were anatomical specimens –“ the Kidnies of the Human Body, the Heart of a Man, the Heart of a Woman, that of a Child, etc.” Some of them were prepared by Greene’s son Thomas.

Richard Greene died in 1793. After his death the collection was broken up. The main part of the curiosities was bought by Walter Honeywood Yate of Bromsberrow, near Gloucester. For several years he kept them together as a museum and made many additions to it. In 1801 he published a Catalogue dedicated to Sir Joseph Banks and the Earl of Leicester. Yate’s Catalogue is also accompanied by a list of benefactors, where most of the same names are mentioned.

Greene’s grandson Richard Wright, who was a surgeon at Lichfield, later bought back most of these items, but after his death in 1821 the collection was again scattered.

Today some isolated exhibits can still be found in various collections around the country and even the world. The impressive Musical Altar-Clock which is shown in the illustration by E.Stringer, is now in the Victoria Art Gallery, Bath. Some of the pieces of armour and arms are probably in the Tower of London. One of the 15th century manuscripts is at the Huntington Library, in the United States. Some minor items survived in Lichfield and can be seen at Erasmus Darwin House there.

In 1776, Dr Samuel Johnson wanted to bring Boswell to Lichfield, to show him “genuine civilised life in an English provincial town”. The description rang true. The city of the magnificent St Chad’s cathedral, Lichfield was associated with the great collector Elias Ashmole (1617-1692), the great actor David Garrick (1717-1779), and with Samuel Johnson himself. The poetry of Anna Seward and Erasmus Darwin aroused an interest in literature there. The first meetings of the Lunar Society brought to Lichfield a taste of Philosophy, Politics and Science.

Greene’s rich collection of curiosities clearly reflected the ideas of the Age of Enlightenment, and corresponded with the research of the celebrated scientists and inventors. Its ability to satisfy many various interests added much to this feeling of civilised life. Greene’s museum really opened a window to the wide world for the people of Lichfield. Through its collections they became acquainted with leading contemporary scientists and their methods, and with many of the great discoveries, ideas and achievements of the age.