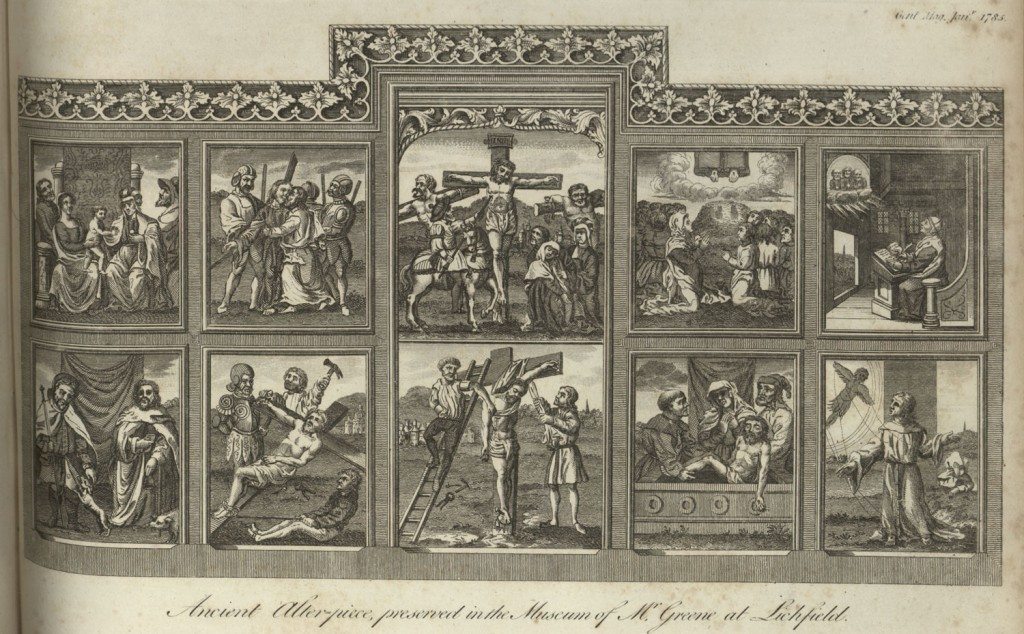 Image: “Ancient Alter-piece, preserved in the Museum of Mr Greene at Lichfield.”

The recent discovery of Herculaneum (1738) and Pompeii (1748) was represented by “Part of a Copper Boiler, found in a Subterraneous Kitchen at Herculaneum, presented by Dr Solander; the other part in the British Museum; near 3000 years old”. The Swedish naturalist Daniel Solander (1733-82) was one of Linnaeus’ greatest students. He came to England in1759, and soon he became a Librarian and Keeper of the Natural History collection at the British Museum. Along with Joseph Banks, he was a botanist on the Endeavour in 1768. It is interesting, that Solander never visited Italy. So it is possible that the item from Herculaneum was given to him by the artist William Parry (l742-l791) who travelled in Italy in 1770-75, and shortly after his return to England painted the famous group portrait of Dr Daniel Solander, Sir Joseph Banks and the Tahitian Omai. (In 2002, the painting was jointly acquired by the National Museums and Galleries of Wales, the Captain Cook Memorial Museum, and the National Portrait Gallery).

In the Catalogue of 1786, a “fragment of a Rock of granite, found in a morass, near the bay of the Gulph of Finland by Count Carbury and brought to Russia for the purpose of erecting a statue of the Emperor Peter the Great” is described. In spite of some factual mistakes in this description (the rock was actually found in Russia, about 20 miles from St Petersburg), this item reflected an important aspect of Russian contemporary history. The Empress Catherine II commissioned an equestrian monument of Peter the Great from the French sculptor E.-M. Falconet. The huge granite rock called the Thunder-stone which serves as the pedestal for the statue was discovered in 1768 on the shore of the Gulf of Finland, in the vicinity of the village of Lakhta. It took nine months to move the enormous monolith weighting 1,600 tons to its final site. Four hundred people, using at first rollers, and then on a barge built especially for this purpose laboured to bring it to the capital. A medal commemorating the transportation of the rock was issued by the St Petersburg Mint. However, it was only 12 years later that the completed monument was unveiled.

An exciting story accompanies “a Turkish Musket, the Stock, Lock, and Barrel … richly ornamented, and mounted with silver’ – it was ‘taken from the Turks by Count Orlow the Russian General; afterwards exchanged with an English Gentleman for a fine horse, the Gentleman presented it to the Right Honourable Lord Paget, who gave it to the museum”. Count Alexis Orlov (1737-1807) was one of the leading figures in the coup, which brought Catherine II to the throne. For his splendid victories in the Russo-Turkish Wars, the Empress rewarded him with a land in the steppe region of Central Russia (Voronezh). It was here that he established the Khrenovsky Stud where the famous breed of horse, the Orlov Trotter, was created. Orlov’s knowledge of horses, his wealth and his prestige in the highest political and social circles enabled him to acquire the finest horses from Eastern and European countries. So probably this exchange was for the benefit of all – Orlov obtained a fine horse for his stud, and the Turkish Musket was admired by many visitors to Greene’s museum.