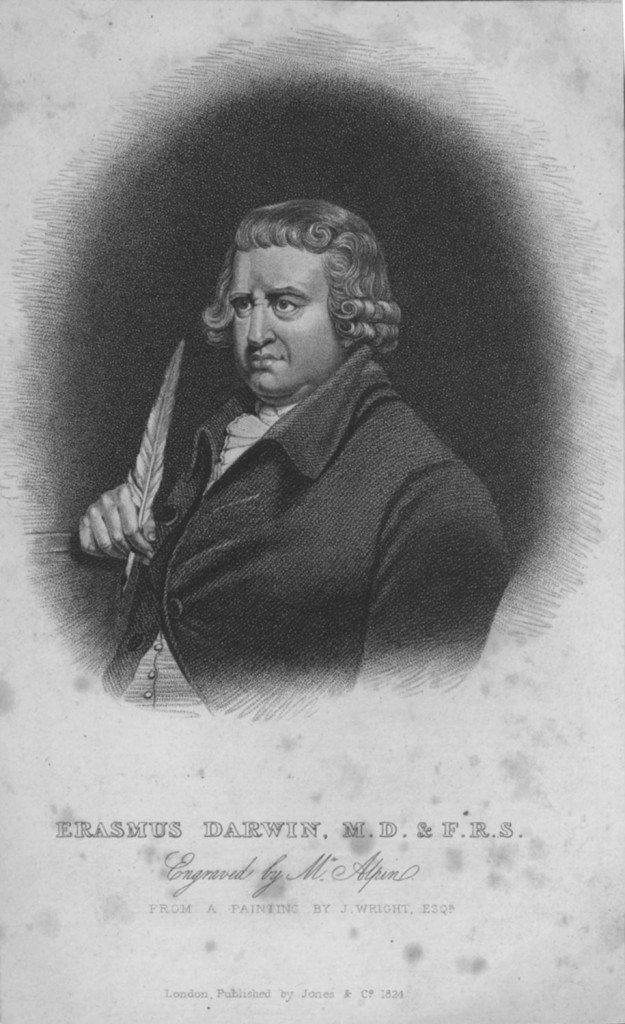 When describing the objects, Greene mentions the donors in only a few cases, but an impressive list of benefactors accompanies the first and the second editions of his catalogues. They provide excellent information about the visitors to the museum and the circle of Greene’s acquaintances.

Members of the Lunar Society regularly visited Greene’s museum. Among its benefactors were Matthew Boulton, Brooke Boothby, Erasmus Darwin (who continued to donate objects to the museum even after moving to Derby.  He was later mentioned as “Darwin Erasm. MD of Radbourne”), his sons Charles and Robert, Thomas Day, James Keir, John Whitehurst, and Dr William Withering.

In 1756, when the young doctor Erasmus Darwin arrived in Lichfield, Richard Greene was the sheriff of the city, so he was probably one of the first Lichfield acquaintances of Darwin, apart from Lady Gresley and Canon Thomas Seward to whom he had letters of introduction. It was Darwin’s good luck to find in Lichfield a collection of objects, which was able to provide him with many excellent materials relevant to his various scientific interests.

Robert Darwin travelled in Holland in 1784, and then spent the spring of 1785 in Paris. He visited Lichfield after return to England. “A silver crucifix in which is the Host brought from France by Dr Robert Darwin” is mentioned in the Catalogue of 1786.

It seems that Greene’s museum and the Lunar Society significantly influenced each other. The collection offered them excellent material for their research.

They were particularly interested in rocks, minerals and fossils, which were not only objects of aesthetic or commercial interest, but evidence of how the earth was formed.

By the 1780s, the collection of minerals and fossils at Greene’s museum had significantly increased. A number of ‘Lythophites, or impressions of Plants in Iron Ore’ was given by Mrs Darby of Coalbrookdale (possibly Abiah Darby (1716-1793), the widow of Abraham Darby II). Greene’s museum also included a  ‘fine collection of Dudley fossils called Pediculi Marini – Marine shells found near the Center of the Kingdom, in the Chalk pits’, samples of lava from Derbyshire and Vesuvius, and Derbyshire minerals and fossils.

These might have been given to the museum by Erasmus Darwin, or John Whitehurst. Darwin studied fossils passionately, and collected Derbyshire minerals for more than 20 years. In 1767 Darwin and Whitehurst together travelled in Derbyshire and probably explored the Blue John caverns near Castleton. In a letter to Matthew Boulton, Darwin described his excited feelings: “I have been into the Bowels of old Mother Earth, and seen Wonders and learnt much curious Knowledge in the Regions of Darkness…” One of the semi-precious stones in Greene’s collection is accompanied by the following remark: “Derbyshire Fluor, call’d Blue-John, but by Mr Boulton of the So-ho Manufactory, Root of Amethyst”.

The contents of Greene’s collection gradually changed, giving more room to materials reflecting the special interests and occupations of the “Lunaticks”. Erasmus Darwin kept alive the memory of Richard Greene and his museum long after moving to Derbyshire in 1781. He wrote to his son Robert: “I am and have been from their infancy acquainted with all the apothecaries there… I remember Mr Green of Lichfield, who is now growing very old, once told me his retail business, by means of his show shop and many coloured windows produced him £100 a year”.