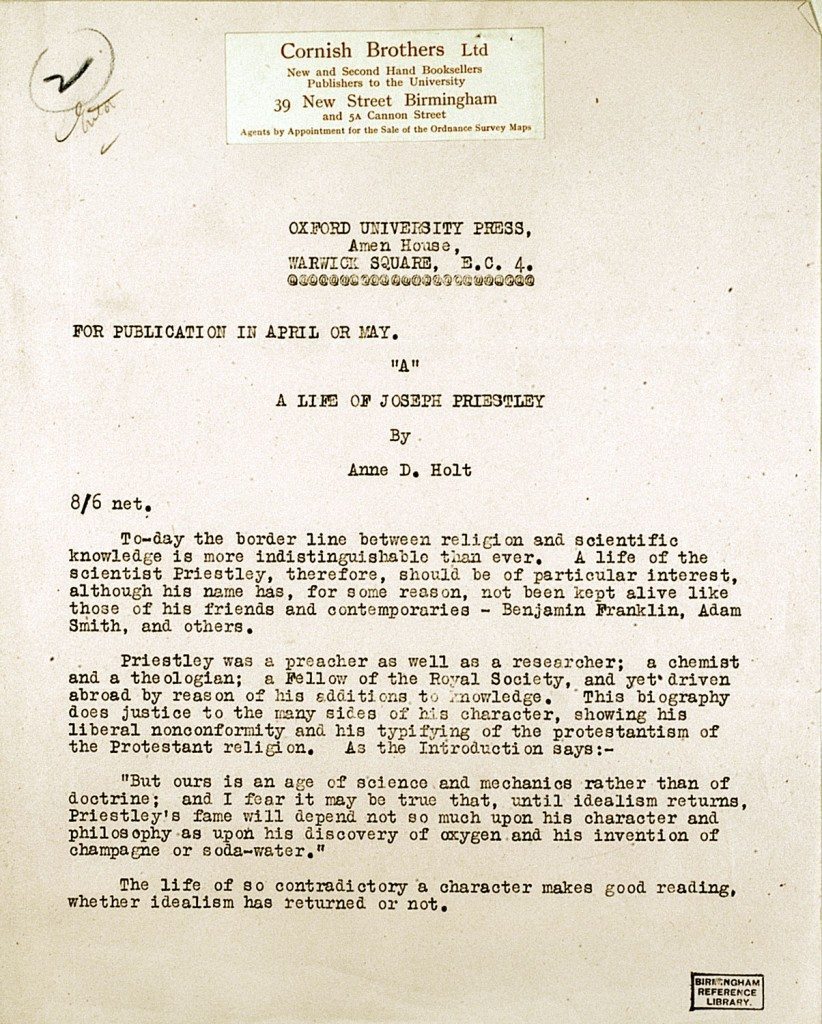 Our hero was sitting at home in Sparkbrook playing backgammon with his wife on the evening of 14 July 1791 when the news arrived that rioters from Birmingham were heading his way. The dissenter meeting houses appear to have been the main targets of the mob, including the Quaker premises in Bull Street. Priestley’s own house at Fairhill was ransacked and set alight, as were the properties of more than twenty other prominent citizens – most of them dissenters. Priestley fled to London, to be joined shortly thereafter by his family. He would never again set foot in Birmingham. Little or nothing of any consequence was saved from the conflagration at Fairhill: experimental apparatus, books, hand-written sermons, diaries, papers and letter correspondence were either consumed by the flames or looted by the crowd. An acquaintance who mingled with the rioters as they demolished his house reported that “the road for half a mile of my approach was strewn with your books, the mob were carrying others away, and there were not above twelve octavoes on the shelves when I entered the room, the floor of which was totally covered, two or three inches deep with torn leaves, chiefly manuscript.” 8

It was a personal tragedy, a tragedy for the Birmingham dissenter community, and, more generally, a tragedy for the spirit of free enquiry all rolled into one. Moreover, the Birmingham riots had far reaching repercussions across the nation for they turned the tide of opinion against would-be reformers of all persuasions – religious, political and scientific. While French chemists hastened to condole and commiserate, the Royal Society remained silent. Even some of Priestley’s friends in the Lunar Society adopted a pained stance, implying in their demeanour that he had, in part, been the author of his own misfortunes. But at least Mrs Priestley did not lose her sense of humour. In a letter to Mrs Barbauld she thanked heaven that she had burned all of her personal correspondence before it could be burned, observing furthermore than it was an ill wind that blew nobody any good. To the astonishment and irritation of the town’s medical practitioners, all their nervous patients and hypochondriacs had been cured by the drama!

The Priestley family did not decide to emigrate immediately. Joseph senior tried to rebuild his life in London with the financial help of friends and his brother-in-law John Wilkinson. He also drew on his spiritual reserves and a huge fund of biblical knowledge which allowed him to construe the workings of Providence and to find solace in even the most unpromising of situations. He even resumed his experiments, whilst admitting in a revealing letter, that social contact and context count for everything in matters relating to scientific endeavour. “There are few things I regret [more] in consequence of my removal from Birmingham”, he informed his Lunar friends, “than the loss of your society. It both encouraged and enlightened me, so that what I did there of a philosophical kind ought in justice to be attributed almost as much to you as to myself.” 9

However, he was now in the grip of powerful forces over which he had little or no control. For one thing there was a real risk that the mob might pay him a repeat visit in his new abode. As the anniversary of the riots came round his Hackney neighbours were in daily expectation of something of the sort apparently. Then there was the problem of his sons, Joseph, William and Harry, who needed to make their way in the world and yet found all doors closed to them. Finally there was the deteriorating international situation: as the example of France became ever more blood stained the winds of “liberty” began to escape the sails of the reformers and to

fill those of the conservatives instead. In February 1793 war broke out between Britain and France. This development placed men like Priestley and his son William in an awkward situation. In common with Tom Paine, author of Rights of Man (1791), they had accepted an offer of French citizenship in a symbolic gesture of solidarity with the French nation. Yet in the new context of armed hostilities, such gestures could easily be misunderstood. Fearing arrest, Paine left for France in the autumn of 1792 and Priestley briefly considered removing himself from the scene in similar fashion.