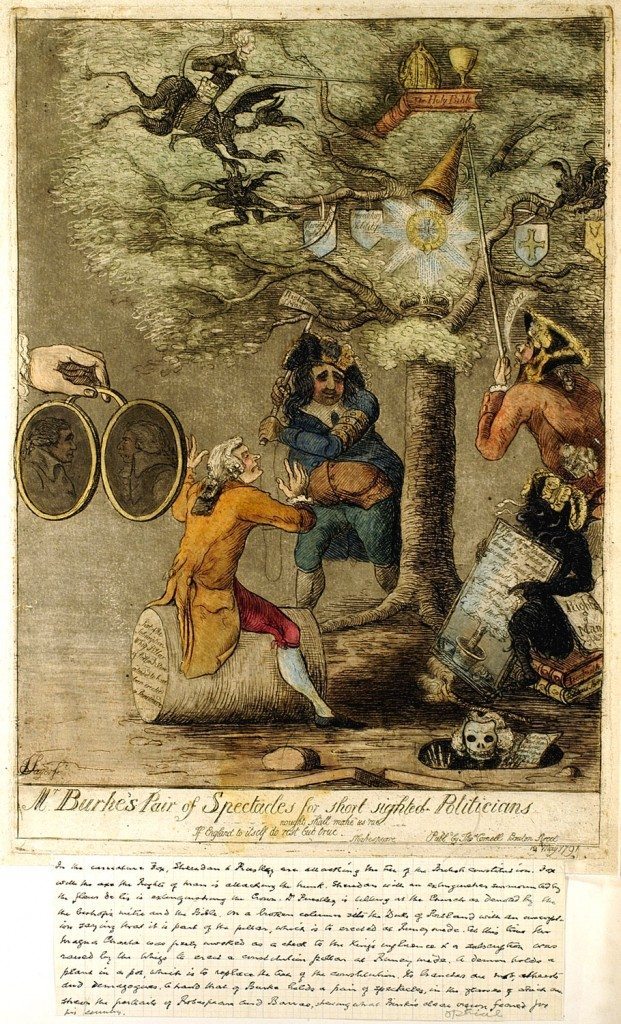 Image: Cartoon. Mr Burke’s pair of Spectacles for short sighted politicians. Edmund Burke attacked the writings and actions of radicals such as Priestley in his book, Reflections on the Revolution in France (1790)

The national-level factor that poisoned the atmosphere of civic cooperation in the town after 1785 was undoubtedly the dissenter campaign for the repeal of the Test and Corporation Acts. This was the legislation dating mostly from the seventeenth century which served to remind dissenters that they had once been actively persecuted minorities. The impediments to office holding by dissenters had mostly been overcome by the second half of the eighteenth century, it is true, but the presence of this legislation on the statute book continued to cause huge symbolic and some practical offence. Motions for repeal were moved in the House of Commons in 1787, in 1789 and in 1790, but they all failed (that of May 1789 by only 20 votes). Dissenters in Birmingham, in common with their co-religionaries in other big towns, were extremely active in this repeal movement, and there can be little doubt that the campaign stirred up deep-seated sectarian animosities.

What about the international factor intruding upon the surface calm of English domestic politics? The irritant here was the outbreak of the French Revolution in 1789, and it is important to remember that the occasion for the rioting in 1791 was the holding of a celebratory dinner on 14 July to mark the second anniversary of the fall of the Bastille. Who were the most conspicuous and voluble supporters of the French revolutionaries in towns like Birmingham? They were the dissenters. After 1789 such men would draw a neat, if not altogether convincing, parallel between the struggle of the French against Bourbon absolutism and their own struggle against the Hanoverian state. Dissenters were not the only group to welcome the French Revolution, of course. The spectacle of political reform across the Channel enthused many adherents of the established church also. However, the link between Dissent and French-style liberté endured, whereas the inclination of other groups to use the example of France for domestic purposes proved short-lived.

A third element can be identified in this volatile admixture of political liberty and dissenting religion: the rapidly expanding science of gaseous chemistry. Who, we must ask, were the prophets of the new chemistry? They were French men like Lavoisier, Berthollet, Guyton de Morveau and Fourcroy. And who was perceived to be their most outspoken English interlocutor? Dr Joseph Priestley. For defenders of the British Constitution such as Edmund Burke, the connection was unmistakable. In his famously lyrical diatribe against the French revolutionaries, Reflections on the Revolution in France (1790), he likened liberty to a “wild gas” 5 – no accidental choice of metaphor.

What of Priestley’s personal responsibility in all of this? He had a facile pen as I have already pointed out, and was scarcely a man to recoil from controversy. When attacked he always counter-attacked, often to the point of recklessness. He goaded his religious and political opponents and was goaded by them in return. So much so that engaging Dr Priestley in controversy became a recognised route for promotion with the Church of England. A year or so after the riots William Hutton, Birmingham’s first historian, remarked wryly that Priestley “had already made two bishops; and there were still several heads which wanted mitres.” 6 One of these was Spencer Madan, rector of St Philip’s who from 1787 became Priestley’s principal local adversary among the churchmen. In 1792 he was rewarded for his services with the bishopric of Bristol. Joseph Priestley’s taste for colourful and prophetic utterances, a characteristic of the Unitarians, could also get him into trouble. In a sermon preached in 1785 he used a metaphor which would prove a real hostage to fortune when he likened the efforts of Rational Dissent to gunpowder laid “grain by grain under the old building of error and superstition, which a single spark may hereafter inflame, so as to produce an instantaneous explosion.” 7 This is the origin of the nickname “Gunpowder Joe” which, in the very different political climate of the 1790s, would replace the more respectful “Proteus Priestley”.