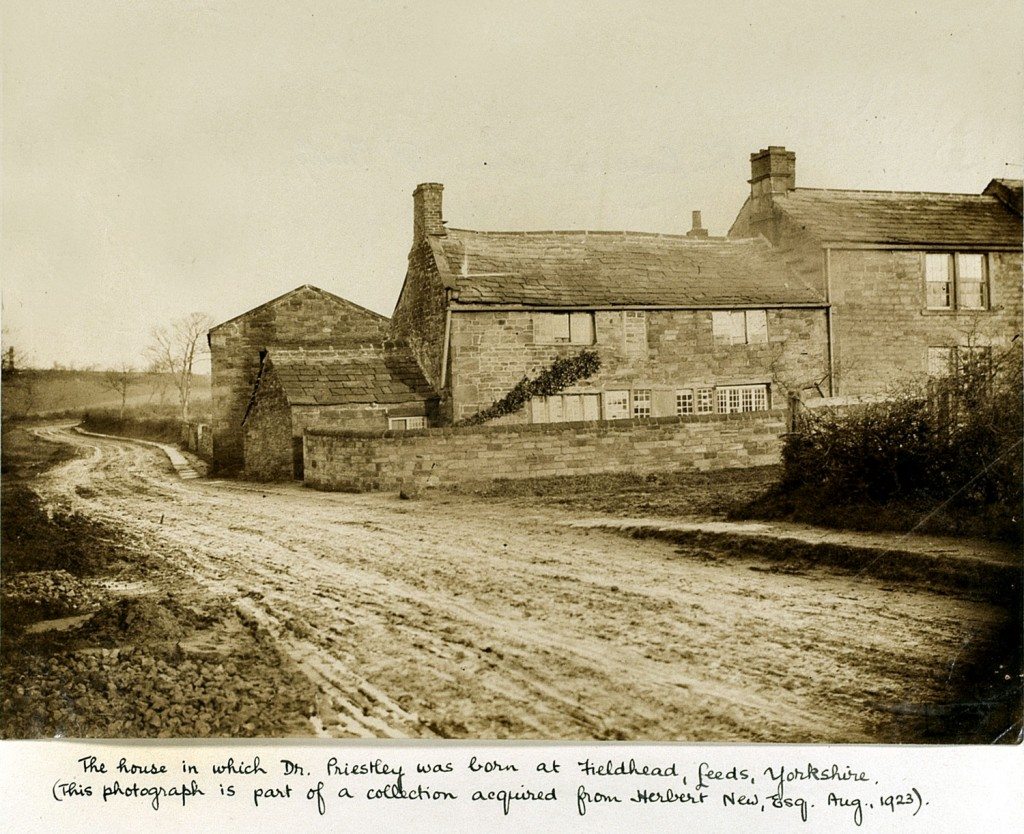 Joseph Priestley was born near Leeds in Yorkshire on 13 March 1733, and continued to live there until he became, at the age of 19, the first student to enrol at the new dissenting academy in Daventry. By the time he left about three years later, along with his main discipline, theology, he had studied philosophy, history, mathematics and science. Furthermore he had gained a working knowledge of six ancient and three modern languages. This formidable intellect was to become one of the most influential men of his time. His varied career took him to Needham Market in Suffolk (1755-58), Nantwich in Cheshire (1758-61), Warrington (1761-67), Leeds (1767-73) and Bowood House in Wiltshire (1773-80) before he came to Birmingham in 1780 for what he described as the happiest period of his life. This ended with the notorious Birmingham Riots of 14 July 1791, which forced Priestley and his family to flee to London. They remained there for two years before the continuing hostility towards his political and religious views led them, in August 1793, to emigrate to Northumberland, Pennsylvania. There, on 6 February 1804, Priestley died, never having returned to his native England. The same strong religious views were at the heart of Priestley’s decision, at the age of 31 in 1765, to devote a considerable portion of his working life to science.

Before this, Priestley, an ordained minister, already had an international reputation for his contributions to the fields of language, history and education. In 1764, this was recognised when Edinburgh University awarded him a Doctor of Laws. He had by this time published the Rudiments of English Grammar (1761), which was in print for 50 years, and also The Theory of Language, and Universal Grammar (1762). His 1764 Chart of Biography – a very large sheet of paper, with the arrow of time running from left to right, upon which the famous names of history were meticulously placed in their appropriate places – was a huge success and was still in print in 1820. According to F W Gibbs:

…had he done no more than he had achieved by this time, he would have done enough to ensure a place in the annals of education … Later, in his hands, the three main influences in education –  the religious, the intellectual and the utilitarian – were combined to give what became the basic grammar school education over a long period.

The subjects he included as essential were Latin, English, French and mathematics, together with physics (natural philosophy) and chemistry. To the arts subjects he added history, to the sciences geography. 1

Our story begins in 1765 when we find the Reverend Joseph Priestley LL.D looking for a new challenge. He chose to embark on a history of science by beginning with a history of electricity. This was far more successful than Priestley had anticipated because he made important discoveries, which launched him into the mainstream of the science of his day. Subsequent discoveries in what we now call biology, chemistry and respiratory physiology put him amongst the greatest scientific discoverers of history.

This paper, which analyses Priestley’s science chronologically, begins with a brief discussion of his religious and metaphysical views, without which one cannot hope to do him justice. There follows a setting of the scientific scene in Priestley’s time, emphasising the key ingredient, missing from Greek thought, that is at the heart of science as we now know it – experiment is the sole arbiter of scientific truth. We then follow Priestley from Warrington, where his pioneering work led to the first publication of the inverse square law of electrostatics, one of the few fundamental laws of physics, known today as Coulomb’s law after the Frenchman who published it eighteen years later; to Leeds, where his work on gases, including the discovery that “plants purify air made noxious by animals breathing” led to his gaining the Copley Medal of the Royal Society; to Bowood House in Wiltshire, the home of the Earl of Shelburne, later Prime Minister, where he discovered oxygen and laid the foundations of the science of respiration; to Birmingham, where he performed the first recorded demonstration that water is not an element and continued his work on respiration.