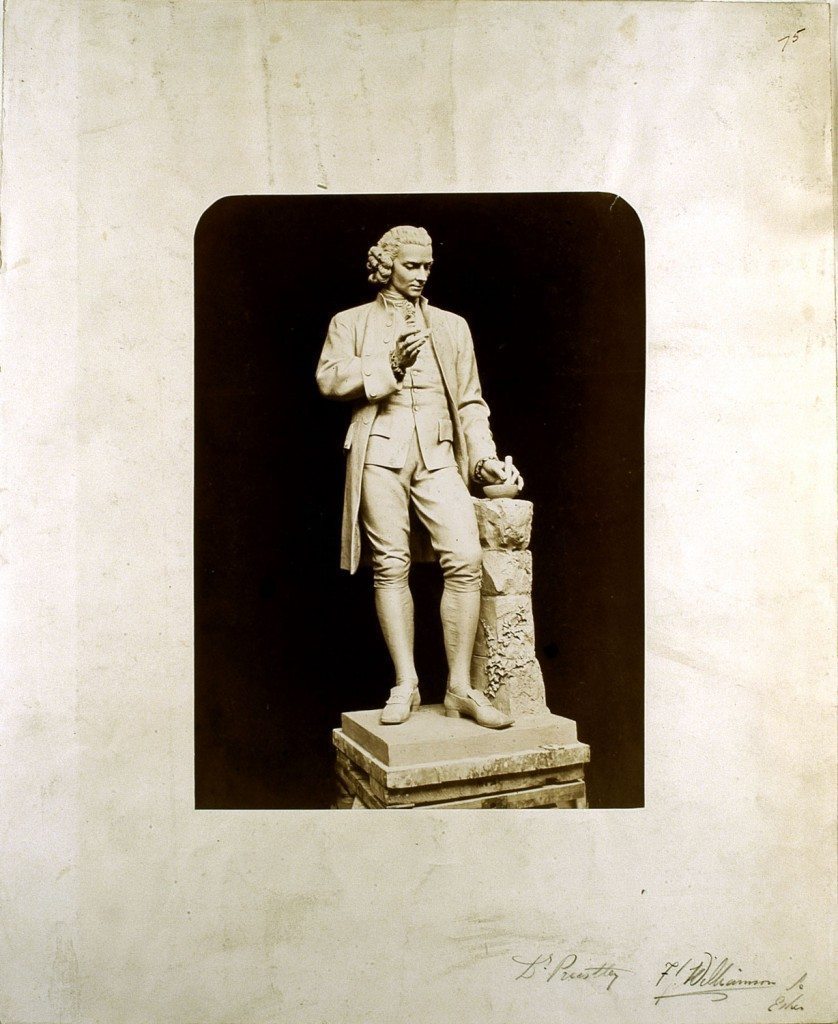 Image: Photograph of the statue of Joseph Priestley sculpted by Francis Williamson and unveiled in Birmingham in 1874. The statue symbolises Priestley conducting the scientific experiment which led to his discovery of “dephlogisticated air” or oxygen. Priestley focuses the rays of the sun through a lens which he directs towards a crucible which contains red oxide of mercury. He holds a test-tube above the crucible to collect the gas which is released during the experiment.

The natural philosopher or physicist of today has a very different picture of the universe from that of the Greeks. Aristotle taught that the universe was divided into two parts: the earthly region, a sphere with the earth motionless at its centre, extending almost to the moon; and the celestial region, again spherical, surrounding the earthly region. These regions were very different.

In the inner, earthly region, all things were made from four elements – earth, water, air and fire – and these were arranged in their proper places: earth, being the heaviest, at the core; next water, air and finally, uppermost, fire, being the lightest. Things are in a state of constant change and decay.

In the outer (celestial) region, there was but one, fifth element, sometimes called “quintessence” and sometimes “aether”. All things being made of this, Aristotle argued that there could be no change or non-uniformity in the stars and planets. This region, also referred to as the “heavenly” sphere, is eternal and has divine qualities. It is composed of concentric divine spheres, beginning with the lunar sphere, the lowest and least divine, and working upwards through the solar sphere and the planetary spheres to the sphere of the fixed stars; outside this is the sphere of the Prime Mover or God.

This hierarchical natural philosophy of the Greeks, with everything having its designated place, was incorporated into the teachings of the Church, mainly by Saint Thomas Aquinas in the 13th century, and is seen in the language of Shakespeare. In King Lear, Gloucester utters the words: “These late eclipses of the sun and moon portend no good to us”. Adherence to the teachings of Aristotle hindered progress in science for about 2000 years. Even Galileo’s discoveries establishing that there were mountains on the moon, that the sun had “blemishes” which we now call sun-spots, and the observation of Copernicus that the planets went round the sun, were not enough to eliminate Aristotle’s influence. In 1624, a law was passed in France, which compelled the chemists of the Sorbonne to conform to the teaching of Aristotle on pain of death and confiscation of goods. 7

Nowadays, we do not divide the universe into two regions. We believe that matter out there in the cosmos and here on earth is made from the same constituents, governed by the same rules throughout. It was not always so: 400 years ago, in 1600, Giordano Bruno was burnt at the stake for arguing, on the grounds that the universe was created by one God, that physics here on earth and out in the cosmos should be the same.

So, atoms everywhere are made of negative electrons bound to positive nuclei by the Priestley/Coulomb electrical attraction, their detailed behaviour being governed by the rules of quantum mechanics and relativity. Nuclei are made up of neutrons and protons, which, in turn, are composed of even smaller particles called quarks. It is not known whether quarks are made of even more elementary building blocks. Discussions in modern biology without our knowledge of atomic behaviour would be unimaginable. Not only did Priestley first state the law that keeps the electrons near the atomic nucleus, he also had a hunch that electricity played an important part in chemistry.

Within the grand transition from the Greek view of matter to our current picture, there are several great sub-plots of science. In an attempt to put Priestley’s discoveries into perspective we will mention three: firstly, the developments in astronomy made by people such as Copernicus, Kepler and Galileo were finally brought together by Newton in his Principia; secondly, there was the emergence of modern chemistry from alchemy in the latter half of the 18th century; thirdly, in the same period, biology split into botany and zoology.

This emergence of modern science from Greek natural philosophy occurred around the time of the Reformation. The key ingredient that eluded the Greeks was experiment. Rationalism, based on logic and mathematics that the Greeks developed to a high level, is not enough. Science is based on the idea that any statement that disagrees with experiment is wrong. Experimental results, repeated and checked, are treated as objective truths. The cornerstone of science is experiment. No theory can ever be deemed absolutely true because not all experiments can ever be performed. When physicists talk of “laws of nature” such as Newton’s “laws of motion”, they no longer regard them as “universal laws”, somehow obeyed by nature; how could a planet know Newton’s “laws”? Rather, the scientists’ “laws” are usually mathematical statements that summarise the results of experiments performed; particularly powerful “laws” also have a predictive power.

It is from the point of view of his contribution to making experimental discoveries about nature that we return to Joseph Priestley. “Let others reason better from the facts with which I supply them if they can: I shall listen to them with attention. But I cannot forbear observing, that I should be more obliged to them for the delivery of more facts from which to reason. Speculation is a cheap commodity. New and important facts are most wanted, and therefore of most value.”

We will take things in chronological order, beginning with his work on electricity in Warrington.