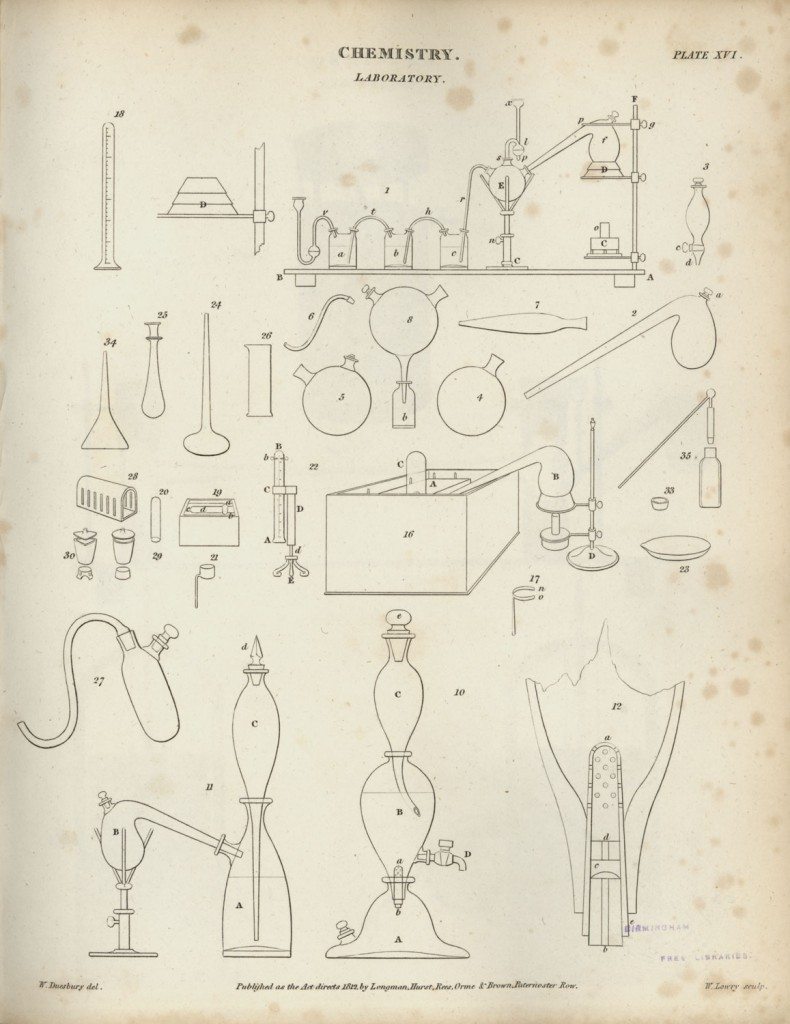 Image from: Chemistry Laboratory Plate XVI from Abraham Rees, The Cyclopaedia or Universal Dictionary of Arts, Sciences, and Literature. Plates vol. II (London, Longman, Hurst, Rees, Orme and Brown, 1820). The illustration shows examples of the chemical equipment that Priestley would have used for handling gases.

“It was a little after Midsummer in 1767, that I removed from Warrington to Leeds: and living, for the first year, in a house that was contiguous to a large common brewery, so good an opportunity produced in me an inclination to make some experiments on the fixed air that was constantly produced in it. Had it not been for this circumstance, I should, probably, never had attended to the subject of air at all.”

Priestley’s first major publications on gases created considerable excitement in the medical world. The unlikely source of this excitement was Priestley’s discovery of how to “impregnate water with fixed air” (make fizzy drinks!) 10  The reason for the excitement is explained in Priestley’s pamphlet:

Sir John Pringle first observed, that putrefaction was checked by fermentation, and Dr. Macbride discovered that this effect was produced by the fixed air which is generated in the process, and upon that principle recommended the use of ‘wort’, as supplying a quantity of this fixed air, by fermentation in the stomach, in the same manner as it is done by fresh vegetables, for which he, therefore, thought that it would be a substitute; and experience has confirmed his conjecture.

At that time, Priestley’s discovery of how to dissolve fixed air suggested that, “this great antiseptic principle may be administered in a variety of agreeable vehicles.” Later, it was felt that fixed air might prevent scurvy, and Captain Cook took improved versions of Priestley’s soda water making apparatus on his voyages. Fixed air does not cure scurvy but we can still remember Joseph Priestley as the father of the soft drinks industry.

We now come to the paper that gained Priestley the Copley Medal – the highest honour of The Royal Society. He had narrowly missed it for his work on electricity – because the relevance of the inverse square law was not yet fully appreciated. In the first paragraph of this paper entitled Observations on Different Kinds of Air 11, Priestley announces that “a considerable number of facts, which appear to me to be new and important, are sufficiently ascertained; and I am willing to hope, that when philosophers in general are apprised of them, some persons may be able to pursue them to more advantage than myself.”

To put these discoveries in perspective it is helpful to have a picture of what was known at the time. It is remarkable that air was still, in 1772, generally regarded as a simple elementary substance – despite the fact that a considerable amount had been discovered about its properties. On the physics front, Galileo had shown that air had weight, Torricelli had measured the pressure of the atmosphere, and von Guericke had invented the pump. In chemistry, Boyle and others had shown that air had two components, one of which supported life. Various chemically different gases had been discovered. For example, Black had shown that “fixed air” (CO2) was part of a solid – chalk – and could be obtained from it by the action of acids; the well-known test for fixed air was that it turned lime-water milky due to the chalk being restored. In addition, Cavendish had discovered “inflammable air” or hydrogen, as we now know it.

What was needed according to Brownrigg 12  was a systematic programme of research into the various “chemically different elastic fluids (gases) that were known; to consider those substances from which they are produced; by exact experiments to detect their properties when native and simple; to inquire what changes may result from their coalitions and combinations amongst one another…” This was the challenge that Priestley accepted: a voyage of discovery into the largely uncharted world of gases, almost all of which were invisible.

To begin with he made major improvements to the technology of handling gases and developed tests for recognising gases. This led to the discovery of new gases: “nitrous air” (nitric oxide or NO) , “dephlogisticated nitrous air” (nitrous oxide, N2O or laughing gas), “red nitrous vapour” (nitrogen dioxide or NO2) and hydrochloric acid gas. Over the last decade, scientists have been surprised to find that nitric oxide has crucial physiological properties, the discovery of which led to the 1998 Nobel Prize in Medicine or Physiology. Although Priestley is mentioned in the Nobel Lectures as the discoverer of NO, there is no mention of his discovery that it had antiseptic properties.

10 J. Priestley, Directions for Impregnating Water with Fixed Air: In order to communicate to it the peculiar Spirit and Virtues of Pyrmont  Water, and other Mineral Waters of a Similar Nature (London, 1772. Dedication dated Leeds, 4th of June 1772).