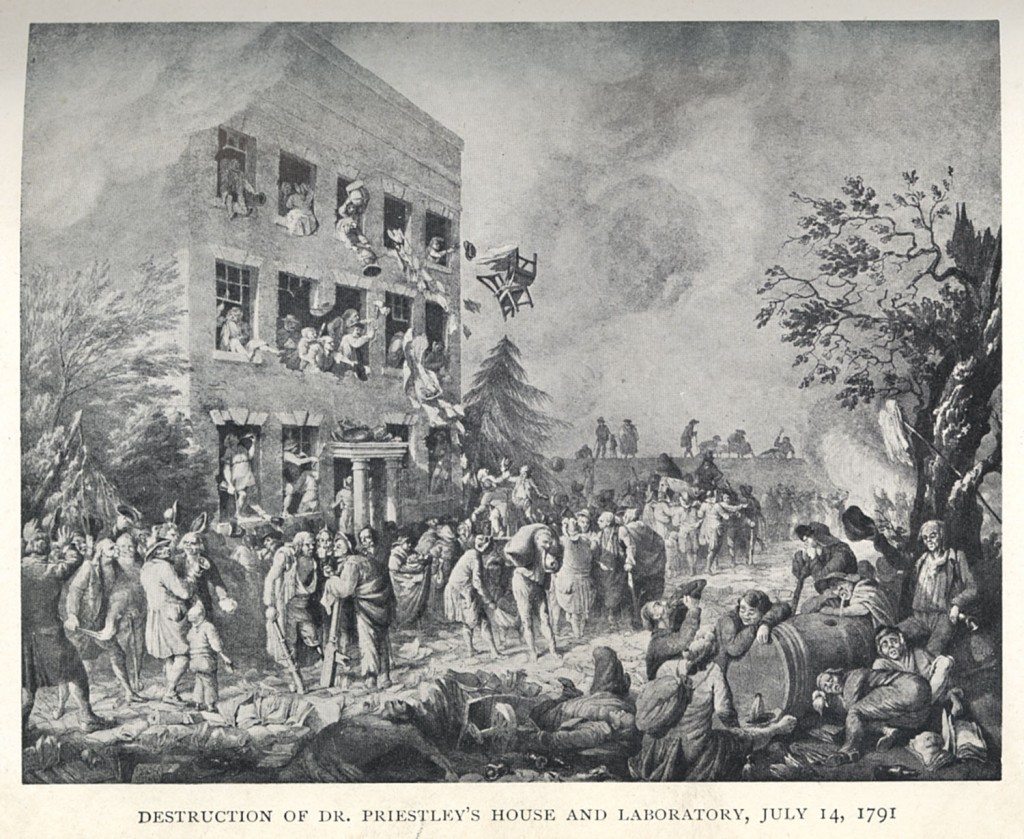 First and foremost, Joseph Priestley was a minister of religion with views that were very unconventional in his day – he was a Unitarian, a Christian who rejected many of what he called the ‘corruptions of Christianity’2  taught by the Church of England. In the Unitarian tradition, he believed that theology should encompass the discovered truths of science, a position that is now quite acceptable to the Church of England. In view of the current interest in the relationship between religion and science, it is perhaps of interest to look in a little detail at one of the outstanding theological and scientific characters of his day. According to John Money 3, Priestley’s beliefs were based on two tenets. Firstly, the existence of a benevolent God, whose works were not yet completed and who, therefore, manifested himself in a continuous act of infinite creation. Secondly, he denied absolutely that there was any difference between matter and spirit. Here Priestley is taking on board David Hartley’s doctrine of the association of ideas. Hartley, influenced by the works of Newton, saw mental and emotional processes as having physical causes, just like the behaviour of inanimate planets. As pointed out by Jack Lindsay 4 in the introduction to Priestley’s autobiography, in the 18th century order in nature was considered as evidence for the existence of God. Money goes on to show that the first tenet implies to Priestley that God will be beneficent to mankind, which will eventually reach a state of unlimited happiness. For him, the pinnacle of this euphoric state is to act in conformity with the divine will. To arrive at this state, the Hartley doctrine (the second tenet) implies to Priestley that one must learn more and more about nature, not by theorizing, but by revealing nature through experimental discoveries. Eventually, a state will be reached when everyone, through this “pure revelation” of experiment, will know all things equally, what philosophers might term a state of absolute, utopian epistemological egalitarianism. 5

For Priestley then, the natural philosopher was something of a missionary explorer seeking the “hidden powers which the Deity had impressed upon matter.” Again in his own words, “I view with rapture the glorious face of nature and I admire its wonderful constitution, the laws of which are daily unfolding themselves to our view.” All this tells us that, to understand Priestley, it is essential to appreciate that, because of his religious belief about the divine nature of experimental revelation, he felt that he could best serve the community by moving rapidly from one discovery to another. As Gibbs points out 6: “It was not his purpose to be side-tracked by any incidental observations, however intriguing. He was setting a trail. Others would pick it up, and in this way, natural knowledge would grow faster.”

In fact, many clearly recorded important discoveries – in biology, chemistry, physics, and physiology – were left virtually untouched. Undoubtedly, one reason for this was the prejudice against his religious and political views – he was a liberal – that eventually led to the notorious 1791 Priestley Riots in Birmingham, during which his place of worship, his home, his laboratory and all his manuscripts were systematically destroyed. The absence of manuscripts may partly be responsible for the fact that Priestley’s contributions are under-appreciated.

2 J. Priestley, An History of the Corruptions of Christianity (printed by Piercy and Jones for J Johnson, No. 72 St Paul’s Churchyard, London, 1782).

5 It is tempting to compare this with a statement from the epilogue in Stephen Hawking, A Brief History of Time (Bantam Press, London and New York, 1988).

However, if we do discover a complete theory, it should in time be understandable by everyone, not just a few scientists. Then we shall all, philosophers, scientists, and just ordinary people, be able to take part in the discussion of the question of why it is that we and the universe exist. If we could find the answer to that, it would be the ultimate triumph of human reason – for then we would know the mind of God.