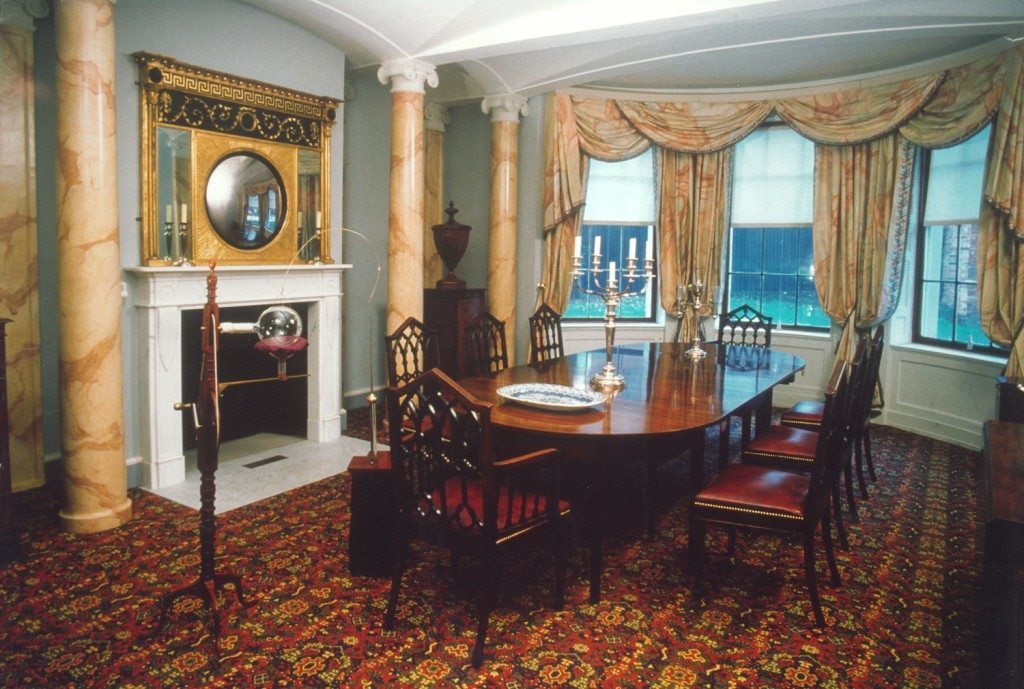 Image: The dining room at Soho House, Handsworth, Birmingham.  This is the room where the meetings of the Lunar Society took place and many experiments conducted.

One of the reasons why Priestley was happy in Birmingham was that he had been invited to become a member of the Lunar Society of Birmingham, which became the leading scientific group in England in the decade between 1781 and 1791.

The story of the synthesis of water is one that has been surrounded by controversy because of its important role in the overthrow of the Greek view of the matter. This synthesis, together with the isolation of oxygen, was the crucial experiments that enabled Lavoisier to lay down the foundations of modern chemistry, ending the traditions of alchemy and phlogiston.16  It would seem, therefore, appropriate to summarise the story of the water controversy by listing some key publications in chronological order.

In 1775, Priestley 17 reported on exploding a 1:2 mixture of oxygen and hydrogen: “with little more than one-third of highly dephlogisticated air, and the rest inflammable air, in the same phial, the report will be almost as loud as that of a small pistol; being, to judge by the ear, not less than forty or fifty times as loud as with common air.” Anyone contemplating this experiment should take great care; ordinary test tubes will shatter! In 1781, Priestley 18 described repeating this “as a random experiment, made to entertain a few philosophical friends, who had formed themselves into a private society, of which they had done me the honour to make me a member.” It was reported that, when the experiment was carried out in closed, clean, dry glass vessels, a dew was observed on the inside after the firing. The private society was the Lunar Society of Birmingham.

According to Schofield 19, “Cavendish caught the possible significance of some casual experiments made by Priestley and Warltire and instituted a series of experiments which might naturally lead him to a conclusion about the nature of water. These experiments were performed later in 1781 but were not published then.”

On 26 April 1783, Watt interpreted an experiment by Priestley 20, which included the following: “Are we then not authorized to conclude that water is composed of dephlogisticated air and inflammable air, or phlogiston, deprived of their latent or elementary heat, and that dephlogisticated air or pure air is composed of water deprived of its phlogiston…?” 21  There exists controversy about this letter, but the consensus seems to be that Watt was the first to conclude that water is a compound, without fully appreciating what it is a compound of.

In June 1783, Priestley made public Cavendish’s result – an accurate demonstration of the composition of water. Later in 1783, Lavoisier, who repeated Cavendish’s experiment, came to the correct conclusion about the compound nature of water. Schofield concludes: “The experiments then were Cavendish’s, the ultimate understanding was Lavoisier’s … Cannot Watt, at least, be granted his due: that he independently saw and reported the significant consequences of important experiments?” What about Priestley? There is no doubt that he was the first to synthesise water, no later than 1781. Priestley did not feel directly concerned in this controversy. He was more concerned with providing more experimental evidence. “In this business I am little more than the bellows blower.”

Priestley, the trail-blazer, had already moved on. He was, by this time, getting involved with a new problem, arising from his activities using hydrogen: the iron from which it was being produced came in different forms –  cast iron, steel, etc. – with different properties which he later showed were related to the amount of foreign matter in the iron; Priestley the metallurgist.

Cavendish and Lavoisier are usually credited with demonstrating that water is a compound, but the first recorded synthesis of water was in Birmingham. It may even have taken place in Soho House, the home of Matthew Boulton, which, in 1995, was renovated and opened to the public, looking as it did two centuries ago.

We finally come to a short paper 22 on respiration, which appeared in the Philosophical Transactions of the Royal Society in 1790, the year before Priestley was hounded out of Birmingham by an establishment-incited mob. Here Priestley recorded measuring the amount of oxygen breathed in and the amount of carbon dioxide breathed out: “I proceeded to ascertain how much fixed air (carbon dioxide) was actually formed by breathing a given quantity both of atmospherical and of dephlogisticated air (oxygen), in order to determine whether any part of it remained to enter the blood, after forming the fixed air.” His discovery that the blood absorbed oxygen remained largely ignored for half a century because of Lavoisier’s conjecture that respiration consists of combustion in the lungs, specifically the tubules, into which the blood secretes a humour (fluid) containing carbon and hydrogen, which yield carbon dioxide and water on combustion.