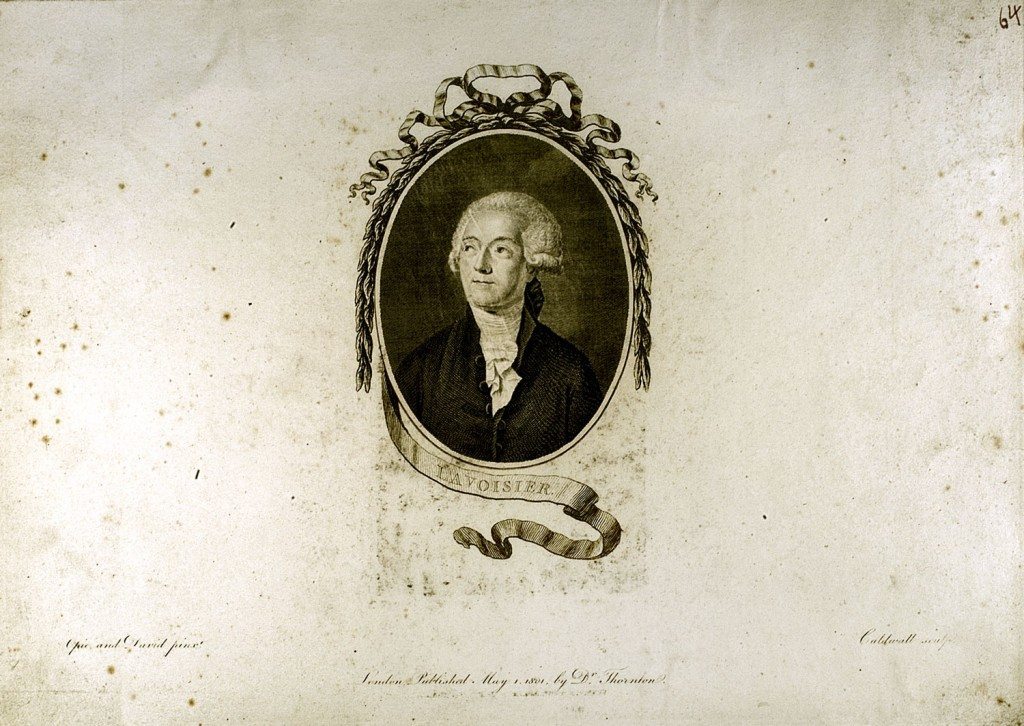 Image: Antoine Lavoisier, the French chemist, whom Priestley met in 1774.

Priestley vividly describes how he heated what we now call mercuric oxide with his new 12-inch burning lens to discover the most remarkable of all the kinds of air I have produced 13. . He went on to say:

… this air is of exalted nature … A candle burned in this air with amazing strength of flame; and a red hot wood cracked and burned with a prodigious rapidity, exhibiting an appearance something like that of iron glowing with a white heat, and throwing sparks in all directions. But to complete the proof of the superior quality of this air, I introduced a mouse into it; and in such a quantity that, had it been common air, it would have died in a quarter of an hour; it lived, at two different times, a whole hour, and was taken out quite vigorous.

Priestley is best known for isolating the life-supporting element in the air, itself a truly romantic discovery. It was, however, more than that. The discovery of oxygen was a turning point in the quest to understand matter. Since the latter part of the 17th century, the interpretation of experiments was influenced by the “phlogiston theory” of Becher and Stahl. It hardly deserves to be called a theory, but a last attempt to keep fire – the word phlogiston comes from the Greek word for fire – as an element.

Although he was aware of its limitations, Priestley continued to use the phlogiston idea, possibly because Lavoisier’s formulation was also not the whole story, and said of the exalted gas (oxygen) that it “may not improperly be called dephlogisticated air”. We shall see how Lavoisier improved Priestley’s experiment to gain extra information, which enabled him to refute the phlogiston idea. This crucial experiment of Lavoisier’s was one of two, both improvements on pioneering efforts by Priestley, which led to his foundation of modern chemistry 14.  The idea behind the phlogiston doctrine was that substances were made of phlogiston (the essence of fire) and ash. Good fuels such as candle-wax were rich in phlogiston and their burning was pictured thus:

Here we can see why Priestley called oxygen “dephlogisticated air” – it attracts phlogiston. The age-old process of getting metal from ore was pictured thus:

It is ironic that the discovery of oxygen, which led to the overthrow of the phlogiston doctrine, was made by Priestley, one of the most eminent scientists to resist the demise of the old way of thinking. Cavendish was another.

What Lavoisier did first was to heat some tin with air in a sealed container (slow burning). He made two observations:

1. When he opened the container, air rushed in; he did not notice anything – phlogiston in particular – rushing out as (1) above would suggest.

2. The ash weighed more than the tin he started with – so phlogiston would need to have negative mass, which is impossible.

This marked the end of the phlogiston era, and with it the Aristotelian idea of fire as an element. The result of the experiment suggested to Lavoisier that when a substance burns in air it combines in some way with part or all of the air.

The next phase of his study sets out to determine something quantitative about the role played by air in the burning process. Lavoisier heated mercury in contact with a measured volume (V) of air and watched to see if the volume changed. He found that after the volume had gone down to 4/5 V, no further change took place. The remaining gas extinguished a lighted taper and suffocated animals put in it – he called the gas “azote”, meaning “without life” in Greek; we now call it nitrogen. Lavoisier next took the residual ash (mercuric oxide) and heated it in the manner used by Priestley in his discovery of oxygen, and found that the volume of gas collected was 1/5 V – he had recovered what he had lost on heating the mercury. This gas vigorously supported life and burning  – it was oxygen. So, at last, we have something that looks like modern science: when metal is heated or burnt, it combines with oxygen to form ash (oxide).

A man called Priestley from Brummagam

Made his name by discovering oxygen.

This paved the way

For Lavoisier to say:

It was inevitable that, having isolated oxygen, Priestley would turn to the question of respiration. In 1776, and still at Bowood House, Priestley published a paper 15  entitled Observations on Respiration and the Use of Blood, which Gibbs refers to as the “beginnings of a scientific account of respiration”. After a fascinating review of historical ideas on respiration, Priestley described experiments which show that “… respiration is a phlogistic (“chemical” in modern language) process affecting air in the very same manner as … another phlogistic process… calcination (“oxidation”) of metals …diminishing the quantity of it in a certain proportion, rendering it unfit for respiration or inflammation…” In this paper he shows that blood absorbs air and, even better, oxygen; this absorption takes place through serum and through animal membrane; blood goes red when it absorbs oxygen, and black if deprived of it. So, a large amount was established, much of it by Priestley, before Lavoisier began work on respiration (1777). Priestley was not even mentioned in several books on respiratory physiology, selected from the ones which were most used in the University of Birmingham’s Medical School Library.

We now come to Priestley’s spell in Birmingham, which he refers to as the happiest period of his life.