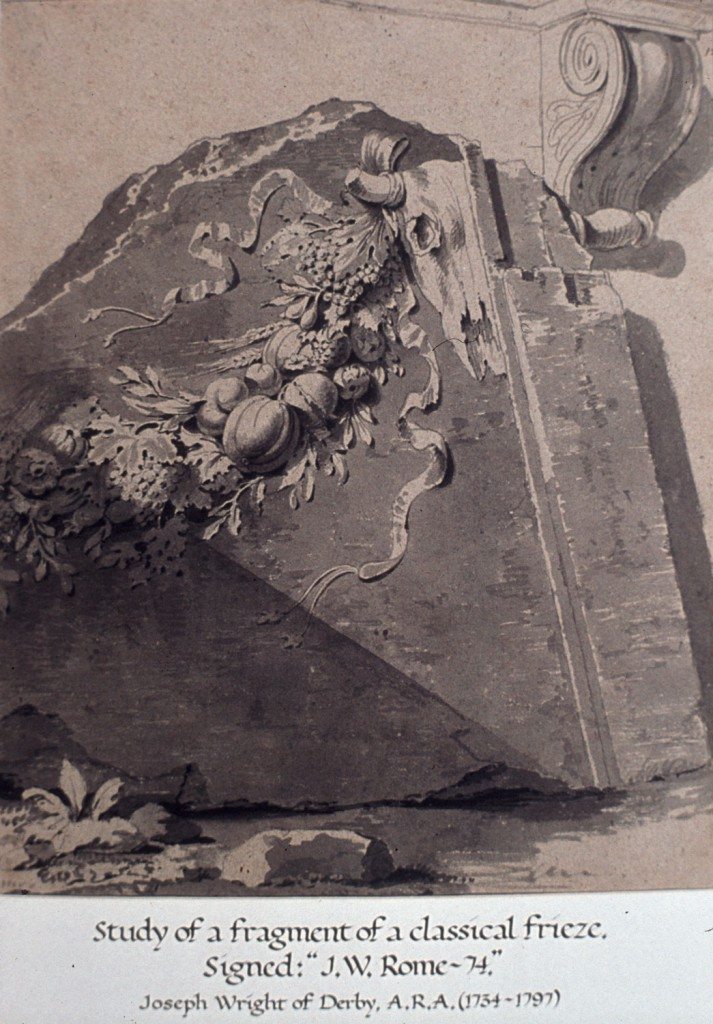 The Study of Fragment of a Classical Frieze, Rome, carefully records the decorative features of the masonry and the play of light and shade on the object. It is probably a piece of the Ara Pacis Augusta.

Wright was profoundly influenced by the legacy of classical antiquity. Like many of his contemporaries, he saw Greek and Roman civilisation as the embodiment of a way of life which was superior artistically, ethically and physically to the present. His visit to Italy from 1773 to 1775 gave him the raw materials to solidify his theoretical knowledge. He produced several architectural studies of decaying ruins and was fascinated by ancient statues and the fragments of masonry. During his recovery from a bout of sickness, he wrote to his sister, Nancy, on 22 May 2004:

“This climate is certainly very salutary, and would, I think, perfectly restore me, was not my attention and application continually engaged with the amazing and stupendous remains of antiquity; and so numerous are they, so each one can scare move a foot but the relics of stupendous works represent themselves. When I consider the immense size of the whole, and the beauty of the parts, I can not help reflecting how trifling and insignificant are the present operations of mankind; we are no better than infants, and ought to wear daiding strings. I have no time to enter into particular detail of the fine things the country abounds with; let it suffice to tell you, at present, that the artist finds here whatever may facilitate and improve his studies. The antique remains of art, as I said before, are wonderful.” 1

Wright’s observations influenced how he saw the world. A later visit to Naples’ archaeological museum, led him to recognise that ancient civilisation was not necessary superior to that of the present day.

“Glad I am to find from the observations I have made in these places, that the present age is not so degenerated, either in size of morals as some would imagine. The skulls of the old Romans were the size of the present, and from the Chirurgical (surgical) instruments which are in the Museum, they were liable to the same disorders, indeed there is no doubt but Nature was always the same and will be so ad infinitum.” 2

Whilst in Italy, Wright produced many studies of the classical sites and objects he saw. In Derby Museum & Art Gallery alone, there are forty-six individual examples, which illuminate his approach to the antique and reveal his abilities as a draughtsman. After his visit to Italy, Wright’s paintings do not, as one might have expected, replicate his initial fascination with ancient art and architecture. Instead they reflect his growing interest in the world of nature – land, water, sky, moonlight, fire and volcanic eruptions – which the trip stimulated.