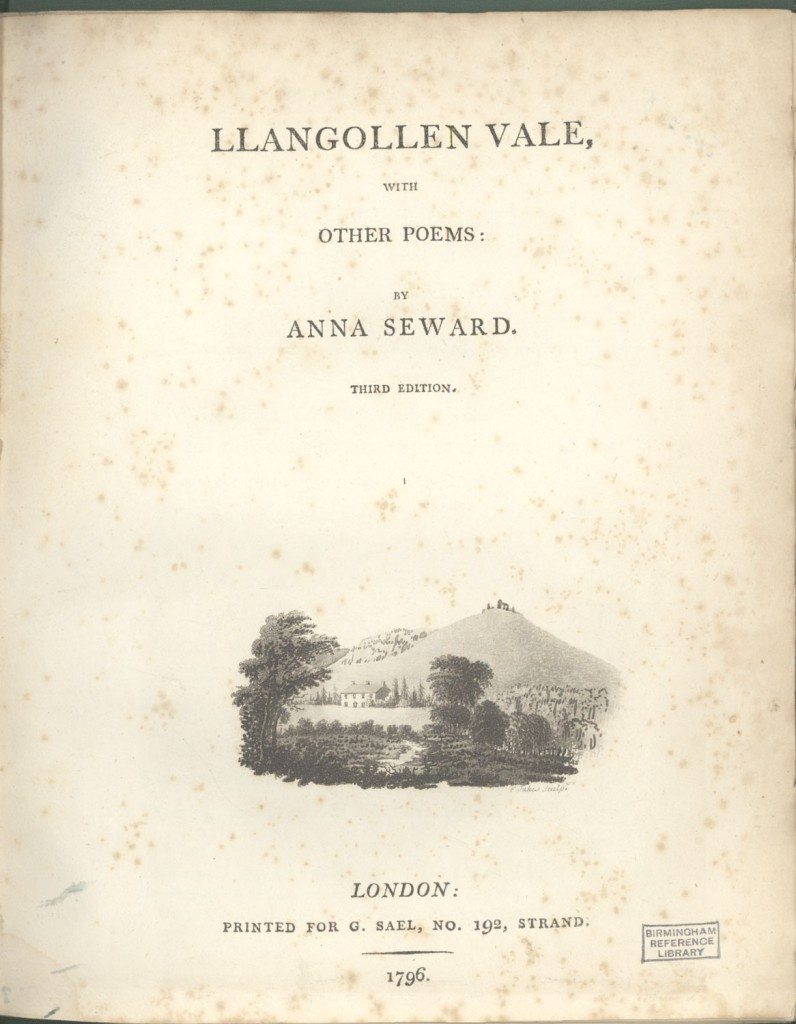 5. Anna Seward and her Poetry

Throughout her early life, Anna had continued to write her poetry, still encouraged by Darwin, who she considered her mentor. It was he who sent her poem, written in 1774, as she sat in the ‘pleasure garden’ he had constructed in a little wild valley at Abnalls, a mile from his house, to the Gentleman’s Magazine, where it was published.

She had always read widely, from books, that same Gentleman’s Magazine and The Female Spectator. She listened to what was happening around her and started to contribute forthright opinions to these magazines, exerting a powerful influence on the critical and poetic views of her day, for Anna believed everyone was entitled to speak their mind and should have chance to display their natural genius. But it was in 1780, following the death of her mother, that her literary life came into being.

Her poems, notably her Elegy on Captain Cook (1780) and Monody on the Death of Major Andre (1781), were greatly admired, as was her sentimental verse novel, Louisa (1784), which ran to five editions in Britain and one in North America. She always supported younger poets and writers: Walter Scott, Robert Southey, and Samuel Taylor Coleridge, Thomas Chatterton, Robert Burns, and championed any of ‘humble origin’, like Thomas Bewick.

Anna had a taste for sentiment, sublime landscape and medievalism. She carefully cultivated her reputation as a ‘blue stocking’ and principled critic. In her vast correspondence, which she preserved and re-wrote for publication, she offered opinions on almost everything, while still portraying herself as a dutiful daughter, a friend, a busy gentlewoman going about her round of daily life, often finding little or no time to write.

Provincial Lichfield life might seem strange in one who was so ambitious to hold sway on the public stage, but Anna always declared her condemnation of that ‘Great Babylon’, London and its high society, refusing to move, either to there or to Bath. It proved a very shrewd move. By staying in her home town, Anna Seward ensured that the literary world came to see and hear her, ‘The Swan of Lichfield’, visits that were ‘the most high-prized honours my writings have procured for me.’

Even Samuel Johnson, ‘The Great Cham’ and James Boswell came to visit her, but she had no time for either – she thought Johnson an ‘over-rated sponger who received uncritical adulation’ and Boswell ‘a Scottish coxcomb’!

In her 40’s, Anna was invited by Lady Anna Miller of Bath-Easton to join her circle. At Lady Miller’s home, aspiring poets would meet and socialise placing their work into a large urn, known as The Delphic Vase. The best poem would win the Wreath of Myrtle. Anna was overwhelmed on one occasion to receive it. It led to her fame and by the end of the decade contributions by and about her were rarely absent from the pages of leading London periodicals.

She also won the admiration and friendship of the poet and biographer, William Hayley. He visited her, spending two weeks in Lichfield, confirming her position as the new leader of literary society there. She then visited him at his home in Eartham, Sussex and carried on, with him, a voluminous correspondence over several years. Now she was being hailed as ‘The Swan of Lichfield’ and ‘The Queen Muse of Britain’.

Following her father’s death from a stroke in 1790, Anna continued to live in the Bishop’s Palace on an income of £400 a year. Now, having bought her own carriage, she went to Bath for the waters and for sea-bathing at Hoylake, near Birkenhead, a place she much enjoyed, and it was near here, in Plas Newydd, Llangollen, in 1795, that she visited the celebrated ‘Ladies of the Vale’, Lady Eleanor Butler and her friend, Sarah Ponsonby, describing her visit in the title-poem, ‘Llangollen Vale’ (1796).