Home·Browse·Rural Happiness. To a Friend and Moonlight: in the Country 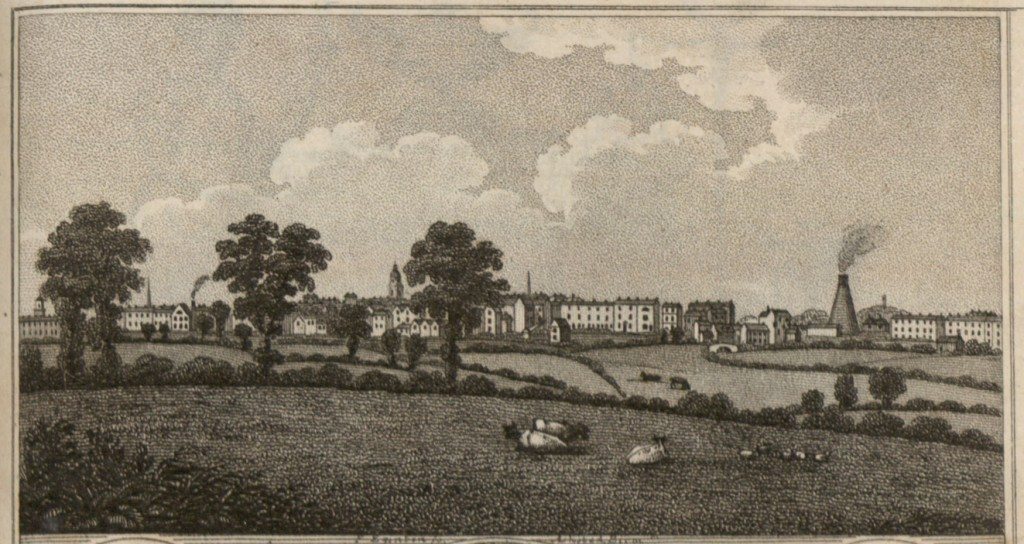 Rural Happiness. To a Friend and Moonlight: in the Country

Image: View of Birmingham from Aston Wharf.  Bisset’s Magnificent Guide or Grand Copper Plate Directory for the Town of Birmingham (Birmingham, Printed for the Author by R Jabet, 1808)

Birmingham is presented across a series of fields populated by sheep and cows. The most prominent buildings are St Philip’s Church in the centre and the cone of a glass house to the right.

Rural Happiness. To a Friend

Moonlight: in the Country

……  the hurrying scenes of busy life,

Where sons of riot, waste the midnight hours;

Plung’d in the dang’rous ways of guilt and strife,

‘Mong noise and smoak, or swallow’d up in care,

These final two extracts are placed together for two main reasons.   The first is that William Shenstone, in his role as a ‘Maecenas of the Midlands’, included among the several  local minor poets he advised and assisted both Mary Whateley and Joseph Giles, a sometime engraver.   Another of his proteges, James Woodhouse, has already been mentioned.   Without Shenstone’s patronage and connections, it is probable that none of these three would have had their early volumes of poetry published.

The second reason for placing these two extracts together is that, while both are about Birmingham, the tone and content of each are markedly different from those of the other.   Miss Whateley’s lines on Birmingham, from a poem in which she also describes the immediate golden agricultural landscape, are simple, bright and positive about the town and its skills.   In contrast, Giles’s description of the town is much darker.   He sees ‘sons of riot’ plotting.   Indeed, there was rioting in the region several times during the second half of the eighteenth century.  The 1760s, for example, saw several outbreaks because of shortages or the high prices of food.   The phrases ‘with Bacchus reign’ and ‘copious draughts inflame’ suggest overindulgence and drunkenness.   While there were contemporary reports and complaints of drunkenness, it should be remembered that in many areas at this time it was still safer to drink beer than possibly-contaminated water.   And in one of his songs, John Freeth wrote in praise of ‘Birmingham Beer’.

Although so different, both Whateley’s and Giles’s descriptions of Birmingham could be true, according to the perspective of each writer.