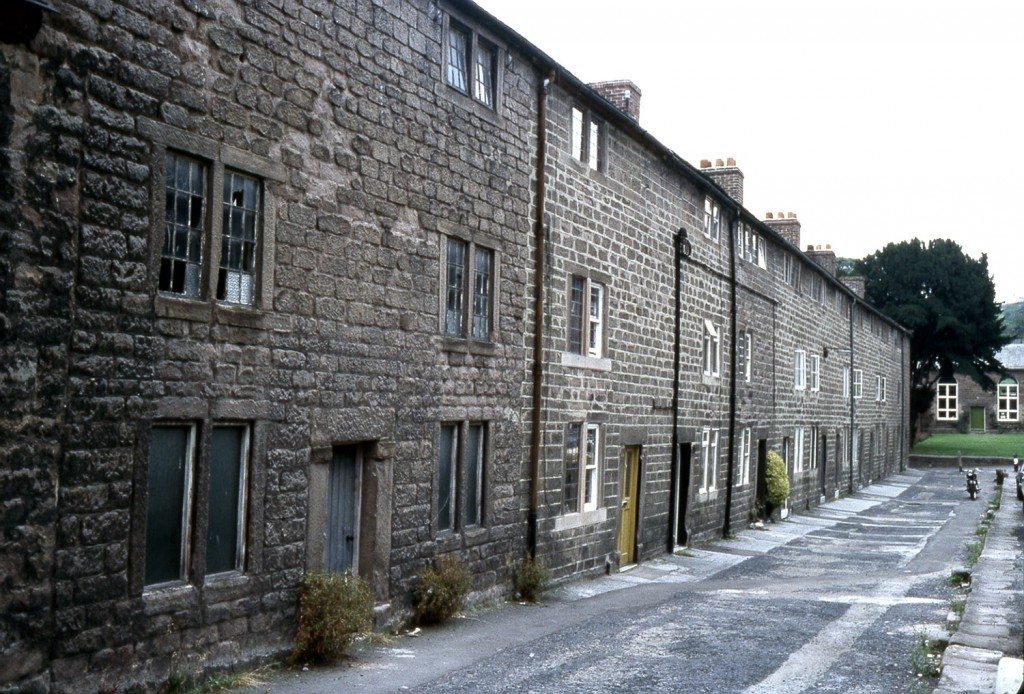 Image: Housing in North Street, Cromford, Derbyshire. Richard Arkwright built houses to attract people to work in his factories. North Street contained two parallel rows of substantial dwellings. The school, which was built in 1832, is located at the right-hand edge of the picture.

Cromford was the creation of Richard Arkwright (1732-1792), the Preston barber who created the cotton factory. Arkwright became a successful businessman by exploiting his inventions which mechanised and accelerated the process of cotton spinning. He built mills at Cromford and nearby Matlock Bath and created a factory community with homes, a market and additional transport facilities. Arkwright rose from relatively humble origins to be knighted by George III and become one of the wealthiest men in Britain.
Arkwright patented his invention, the water frame in 1769. It enabled unskilled minders to oversee cotton spinning without the need for skilled workers. The original machine of four spindles in his patent increased in size to ninety-six spindles in production models. In 1775 he patented a second machine to open and clean the raw cotton, which was less successful. Arkwright’s machines were big. They had to be located in large buildings and powered by water wheels. Cotton was produced cheaply and this helped to stimulate demand. Arkwright’s entrepreneurial skills led him to seek an appropriate location for factory production.
Cromford was in a remote and sparsely populated part of the Derwent Valley, but its fast-flowing streams could be controlled to power the water wheels of his mills. Arkwright and his partners, Jedediah Strutt and the financier Samuel Need leased a site there in August 1771. It was close to the Bonsall Brook and Cromford Sough, a drainage channel for a lead mine, which provided a regular supply of water for his first factory. Between 1771 and 1790, Arkwright constructed mills, dams, workshops, warehouses, market and homes. His successors built a school and additional dwellings for employees. Canals, roads and railways provided the transport systems which linked Cromford to the wider world.
Little is known about the development of Cromford during the 1770s. The first mill was constructed in 1771-72, but production was slow, it was difficult to attract workers and Arkwright had to secure additional finance. A second mill was built in 1776-77 together with high quality dwellings for employees in North Street. In 1783 he constructed Masson Mill at Matlock Bath, outside of Cromford on the site of a former paper mill. Viscount Torrington visited Cromford in 1789 and 1790. He noted Arkwright’s importance: “his grateful country must adore his inventions, which have already so prosper’d our commerce; and may lead to yet wonderful improvements.” (Bruyn Andrews, C, The Torrington Diaries, vol. 2 (1935), p. 40.)
Richard Arkwright II took over his father’s business in 1792 and the Cromford mills were retained by the family until the early 20th century. Profits declined in the 1820s. Stagnation can be measured in population figures. In 1811, 1821 and 1831, census returns record numbers of inhabitants which remained static at 1,259, 1,242 and 1,291.
Masson Mill remained successful, manufacturing sewing machine thread. The Upper and Lower Mill complex ceased to make cotton. One building became a brewery and another was turned into a colour pigment factory and laundry. Fires, reconstruction, new technology and demolition affected the site. Cromford declined economically in the late 19th and 20th century. It was this decline, however, which helped to preserve much of the town with its unique collection of 18th and early 19th century grade I, II* and II listed buildings.
In 2001, the Derwent Valley was designated a World Heritage Site by UNESCO. As well as Cromford, it included, Derby’s silk factory built by the Lombe brothers in 1721, cotton mills and housing at Darley Abbey and the factories and communities created by the Strutts at Milford and Belper. The Derwent Valley became one of only 21 such sites in the United Kingdom. This enhanced opportunities to preserve buildings and other features in the local landscape and access funding to develop tourism and education.