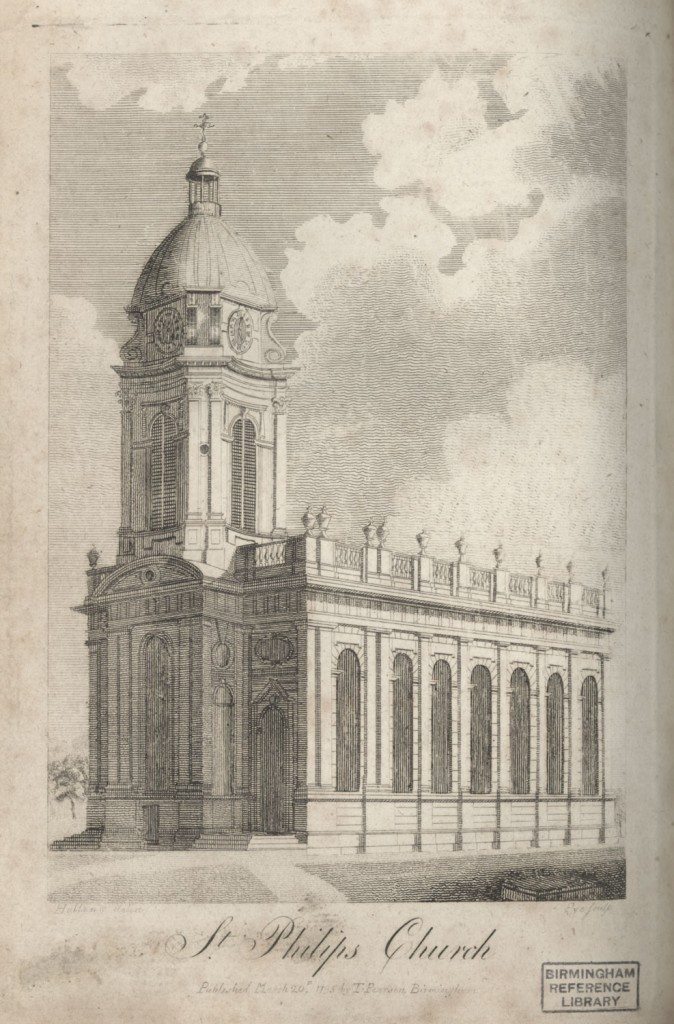 Image: St Philip’s Church, Birmingham from the print by William Westley, 1732. Spencer Madan the Rector of the Church, and Priestley engaged in a theological pamphlet war.

Less conscientious Dissenters could get round this thorny problem by occasionally conforming and attending Anglican Communion once a year. However, even this loophole was closed in 1711 when the Occasional Conformity Act was passed showing that resentment against Dissenters was still high. Furthermore, the Corporation Act was even further strengthened in 1673 when the Test Act was passed, requiring holders of all civil and military offices to sign a declaration against transubstantiation, in order to exclude Catholics from all government offices. A second Test Act was passed in 1678 as a result of anti-popery hysteria after the Titus Oates plot.

These two acts stood unrepealed for over a hundred years and were the causes of long standing grievances for both Dissenters and Catholics alike. Priestley believed in complete religious freedom for all and was naturally incensed by them. During the course of his increasingly acrimonious pamphlet dispute with Spencer Madan, Rector of St Philips Church in Birmingham, he set out his reasons for wanting their repeal and accused Madan of misleading the public into believing that the two Acts were necessary for the continuing survival of the Church of England. Priestley maintained that they were only necessary for the financial maintenance of corrupt churchmen.  Is it any wonder that Madan was incensed? Priestley later denied ever campaigning for the repeal of the Acts: “I was not particularly concerned in the conduct of it”.  It would seem that his memory could be extremely selective when it suited him.

Priestley was an extremely skilled writer, using considerable wit and humour to make his point. In the second of his Familiar Letters, he questions where Madan’s principles had come from: “It must be from some very obscure quarter inaccessible to all mankind.”  Unfortunately, such was his wit that it only served to enrage further those who could not match him in sarcasm. The pamphlet war became more and more bitter and protracted on both sides, at times becoming very personal: “When men are treated like dogs, they will snarl at those who hold the whip over them, whether they receive a blow or not”.

There had already been considerable local tension over the struggle for control of the Birmingham Library, which had been very efficiently reorganised by Priestley since 1780. He had, before 1786, opposed the inclusion of any controversial books of any kind, whether written by himself or others. However, in 1786, a group of churchmen effectively took control of the running of the Library and forced a vote to include Priestley’s History of the Corruptions of Christianity. Priestley immediately changed his stance to advocate the inclusion of all controversial writings. This change of heart was immediately manipulated against him to insinuate that he was just trying to force his own books into the Library. Priestley replied with his high-handed Address to the Subscribers of the Birmingham Library, which John Money has called “ a prime example of his combative righteousness which his adversaries must have found so galling” .