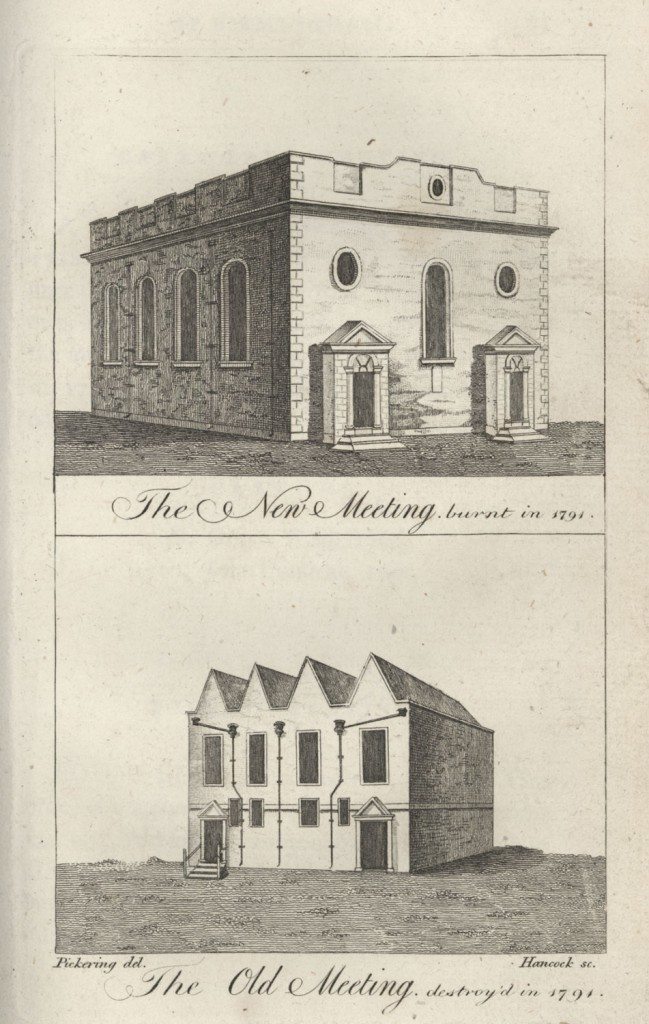 Image: The Old and New Meeting Houses, the Unitarian chapels in Birmingham.

It was from the Unitarians (rational dissenters who rejected both the trinity and original sin), who met in Priestley’s chapel, the New Meeting and its sister the Old Meeting, that many of those in Birmingham influenced by his teaching, came.
A member of the Brotherly Society, a joint society of the teachers from the boys’ Sunday schools of the two Meetings, was William Matthews who had become a Unitarian after hearing Priestley speak at the Society and, to his own astonishment, finding him to be “placid, modest and courteous, pouring out, with the simplicity of a child, the great stores of his most capacious mind to a considerable number of young persons of both sexes, whom … he encouraged to ask him questions … if he advanced anything which wanted explanation, or struck them in a light different from his own.”25 The largely working class Brotherly Society, established in 1796 to train teachers from among the boy pupils, ran schools which attracted many pupils because of their emphasis on a broad secular education – an emphasis as unusual at the time as its democratic organisation. This society itself had grown out of an older one, established whilst Priestley was still minister, which gave both a more extensive education to youths who had left the Sunday school and lectures on science and mechanics to factory workers. The members also ran a debating society and constructed scientific apparatus themselves to investigate the principles of mechanics, hydrostatics, electricity, gases and astronomy. In 1794 and 1795, a member, David Jones, who later became a barrister, delivered “some admirable courses of lectures” on Hartley’s theory of the mind, attended by large numbers of both sexes from different denominations.
A member of this Society, Thomas Clark, gave scientific lectures in his own home to artisans (the more skilled manual workers), several of whom worked at the Eagle foundry and so they were nicknamed the “cast-iron philosophers”. One of these, Josiah Pemberton was an early gas-light inventor. Clark himself had made his own fortune through a simple invention of winding balls of cotton he made to further his wife’s fancy goods business. An attender at Priestley’s Sunday classes, he later ran a school himself. Another philanthropist who gave free lectures in his own house to artisans was the Unitarian Thomas Carpenter. He and his brother Samuel founded the valuable Artisans Library to which artisans could belong for a small subscription, although this would be sufficiently large for a workman’s wage to ensure that only the better-off were likely to join. The participants recalled such ventures with great pride. Apparently, they were all for men and undoubtedly the most spectacular Unitarian educational initiatives were. Women, however, were allowed into meetings as Matthew’s tribute to Priestley quoted above indicates.26
Middle-class benefactors included Thomas Ryland whose family intermarried with Clark’s. The religious, social and political interests of each family were intermingled from Priestley’s time onwards.27 Other ventures such as the “Philosophical Institution” founded in 1800-1, where men like Thomas Wright Hill lectured on science, led Matthews in 1827 to laud the enlightened spirit of Birmingham men of business and the resulting orderly population: “Birmingham may probably be adduced as one of the most striking instances and strongest proofs of the civilizing and moral effects of education, that characterize modern times.”28
Such ventures, then and now, have been criticised for their paternalistic attitudes and certainly there was a gulf between the seemingly egalitarian activities of the Brotherly Society and the increasingly wealthy and professional members of the Old and New Meetings such as the Kenricks, Rylands and Oslers. The Brotherly society itself is most remembered for helping to educate men like Thomas Wright Hill who became its president and James Luckcock, later prominent in progressive Unitarian Sunday school education and a prosperous manufacturer. On the other hand, what must be remembered is that those middle-class businessmen themselves who engaged in these educational ventures were struggling both against the prejudices of the landed upper and middle classes who regarded them not as gentlemen but uneducated philistines and against those of their own kind who saw education beyond fourteen as incompatible with a “sufficient application to business”. In contrast men people like Thomas Wright Hill, who lectured on science and mathematics, argued that further education was far more useful than the pursuits with which young men in business usually occupied themselves.29