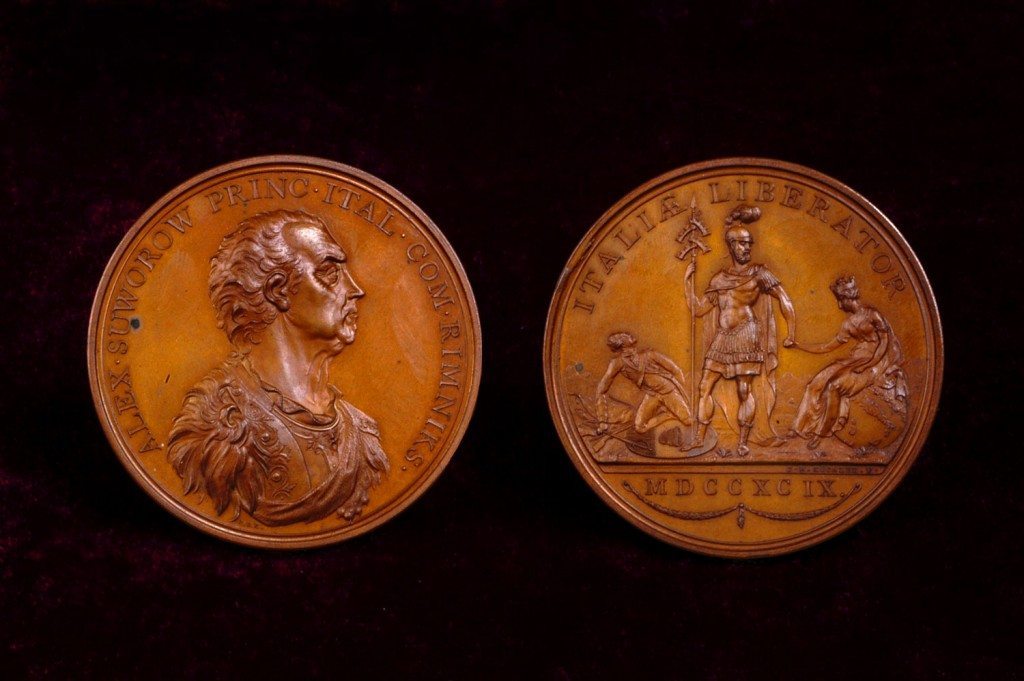 The “Suwarrow” medal was first mentioned in an agreement between Kuchler and Boulton on 10th June 17994. It is dedicated to the victory of General-Field Marshal Alexander Suvorov (1729-1800) over French troops in Italy. It is rather strange that the work on it was started long before the military campaign was complete.

In 1798 Russia joined the second anti-French coalition, which included Great Britain, Austria, Naples and Turkey. It was William Pitt who proposed Suvorov as Commander-in-Chief of the allied forces in Northern Italy. At the urgent request of the allies the Emperor Paul I had to agree. In spite of the fact that the famous Suvorov was out of favour with the Emperor and had even been dismissed in 1797 and exiled to his estate Konchanskoe, near Novgorod, Paul had to recall him and send him to Italy. Suvorov left Petersburg in February 1799. Passing through Mitava he was presented to the exiled French King Louis XVIII. He arrived at the army in Italy on 4th April 1799, and only four days later he undertook several actions in the region of the river Adda, and defeated troops of Generals Scherer, Moreau and Seruier.

On 18th April Suvorov’s troops occupied Milan, and on 15th May they took Turin.
In June a French army under General Macdonald was defeated in a fierce battle at Trebbia. On 17th July the fortress of Mantua, one of the best fortified French bases in Italy, capitulated. On 4th August sharp fighting for the town of Novi took place. In this 16 hours long battle the French forces suffered an utter defeat. The allies themselves lost 6,000 men killed and wounded. In his letter to Paul I, Suvorov said that “it was the bloodiest battle in the chronicles of the world”5 . In a very short time the French were finally dislodged from the whole of Northern Italy, which was claimed by Austria.

The Russian Ambassador Count S.Vorontsov reported from London that Suvorov “was the idol of the English nation, and his health is drunk every day in houses, taverns and cottages” 6 . For the victory in this campaign Paul I presented Suvorov with the title of ‘Prince of Italy’. This is the moment which is commemorated in the Kuechler’s medal.

On the obverse the profile bust of Suvorov is shown, with an inscription around: “ALEX.SUWOROW PRINC. ITAL. COM. RIMNIKS.” The portrait derives from the Russian medal of Suvorov by the artist Carl Leberecht (1755-1827) who was a leading engraver at the St Petersburg Mint. Leberecht’s medal was struck in 1790. It marked Suvorov’s victories of 1787, 1788 and 1790 in the Russo-Turkish war, when he was granted the title ‘Count of Rymnic’. On the reverse Suvorov is shown as a Roman warrior, or Mars, the God of War, raising the figure of Italy and trampling on the shield of a fallen French soldier. An inscription around announces: “ITALIAE LIBERATOR. MDCCXCIX”.

The medal was probably struck before the remarkable crossing of the Alps for Switzerland in September 1799 and the final battles at St Gotthard and Devil Bridge.
For these campaigns, in October 1799 Suvorov was promoted to the highest military rank of Generalissimo, but this rank is not reflected in Kuechler’s medal. These were the last actions of the 70 year old Field Marshal. In October 1799 he was recalled to St Petersburg and died there on 5th May 1800.

The German/British medallist Kuchler was the first artist to express the image of Suvorov as Mars. Next year, on the first anniversary of Suvorov’s death, a monument to him was erected in St Petersburg. In this the Russian sculptor M.I. Kozlovskii (1753-1802) expressed the same idea. Twenty years later, Byron mentioned Suvorov in the same terms in his poem Don Juan.

The Suvorov medal takes a worthy place among the other Soho medals commemorating events of the Napoleonic Wars, such as medal dedicated to Admiral Howe, and particularly the so-called Davison’s Nile medal, which commemorates Lord Nelson’s victory at the battle of the Nile in 1798, and then the Trafalgar medal of 1805.

5 Longworth P, The Art of Victory. The Life and Achievements of Generalissimo Suvorov(London,1965), p.264.