Home·Browse·Medals and Coins of Alexander I 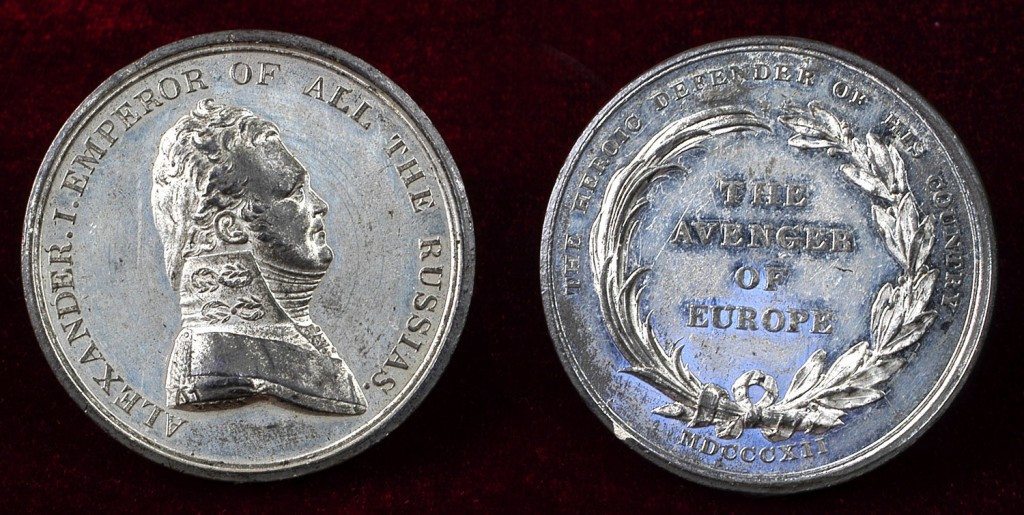 Medals and Coins of Alexander I

Image: Medallion of Alexander I, Emperor of all the Russias. 1812.

The coronation of Alexander I took place in September 1801. At that time foreign artists were still short of images of the young Russian Emperor, so it was important for Boulton to find an original of a good quality.

An image of Alexander I was first mentioned in the letter of Matthew Boulton’s London agent R.Chippendall on 16th November 1801 (However, it seems that Chippendall mistakenly dated his letter “1801” as all the other correspondence on this subject is dated ‘1802’). Informing Boulton about his business with a Mr Hoy, “a resident and citizen of Petersburgh”, he wrote that Mr Hoy had  “a very excellent Bust of the Emperor Alexander, which he says is a is a very striking likeness, and which he seemed to wish you to see.”10 . Mr Hoy was probably a merchant and St Petersburg shopkeeper who had business relations with Boulton, and brought to market some of his wares. At the end of the 18th and early 19th centuries, among several Petersburg “English Shops”, there was one establishment owned by Messrs Hoy and Bellis at 74, Malaia Millionnaia. It was quite successful, as an English visitor wrote in May 1801: “…went into the Shop of Mrs Hoy, a great English house that sells everything.”11 Merchants coming to Britain from Russia obviously brought not only the latest news of “precarious state of Northern affairs”, but also various items including portraits of Emperors and other notable personalities.

On 28 November 1802 Matthew Boulton wrote to R.Chippendall:
I want to have engraved the following heads viz.
1st The King for I have no good likeness of him.
2nd The Emperor of Russia from a bust now at Hackney /…/ But I would not bestow a Die upon any one of them unless I could obtain a good likeness which can only be done by Modelling the face from the original.12

On the same day Boulton also wrote to the London sculptor and wax modeller Peter Rouw (1771-1852) requesting him to make a model of the bust of “the Emperor of Russia from a Bust in the possession of Mr Weissinghausen, No3 Castle Court Cannon Street.” 13 .

Peter Rouw was well known to Boulton. In the same year 1802 he produced fine wax medallions of James Watt (National Portrait Gallery, No183), of Matthew Boulton himself and his son Matthew Robinson Boulton. Next year they were exhibited at the Royal Academy of Arts.

It is not clear who Mr Weissinghausen was, but Chippendall obviously kept his idea of Mr Hoy’s bust, as on 30th November he wrote back:
I have introduced Rouw to Kuechler and knowing Mr Hoy had a very excellent Bust of the Emperor Alexander I have, in company of the two artists, had a sight of it at Mr Hoy’s house, – with which they are both much pleased. – Mr Hoy with great politeness has proposed for Mr Rouw to take the Bust to his apartments and return it to him when he has done with it … tomorrow he leaves this Kingdom for Petersburgh – of which I was acquainted, what caus’d me to lose no time in the application. …There can be no doubt (from the Acc[ounts] of some Russians we saw) that this bust is from the same cast as the one you mention and from their account as well as that of Mr Hoy) – there cannot well be a greater likeness.14

. On 7th December Chippendall wrote again: “I have seen Rouw this day – he has Alexander’s head now by him – a likeness and impression from a seal belonging to Mr Hoy – which is likewise reckon’d a likeness.”15

The work on Alexander’s coins was obviously connected with the needs of the Russian Mint, as in Boulton’s notebook there is a memorandum for himself from the end of March 1803: “Send for a medal or a Model of the Emperor’s head and I will […] engrave a pair of dies, make the pinchers and strike a few pieces all which I will send to the Mint at St P[etersburg] with the collars, also 2 sets of medals”16 . On the next page – another memo: “Write Mr Olenine, answer his letter, Portrait of the Emperor’.

In April 1803 the bust of Emperor along with Rouw’s wax model arrived at Soho.
Specimens with the portrait of Alexander I were produced in silver, copper gilt and copper. Actually they are not medals, but pattern coins (roubles and poltinas, or half roubles). The signature of C H Kuchler on some of specimens adds the artistic and hictorical value to them. The coins vary in size, weight and even design. All of them have on the obverse the portrait of Alexander I, with the inscription: “ALEXANDER I.D.G.IMP. AVTOCR.RVSSOR.” Some of them on the reverse have a Greek cross on a plain field and the date: 1804. Another design on reverse represents the Russian coat of arms: a double headed spread eagle holding an orb and sceptre.

Unfortunately, neither Kuchler, nor Rouw named the sculptor of the original image of the Russian Emperor, on which their works were based. It should be mentioned that in spite of all Rouw’s and Kuchler’s efforts, there is no real resemblance between Alexander I and the image on the coin. Further research would be helpful in establishing a more detailed account of the provenance and history of these fine artistic works.

The “Russian” medals and coins of Soho Mint indicate strong links between Russia and Birmingham at the time of Industrial Revolution. They are not only objects of high artistic merit, but one more example of Matthew Boulton’s deep interest in Russian current affairs and his professional response to them.