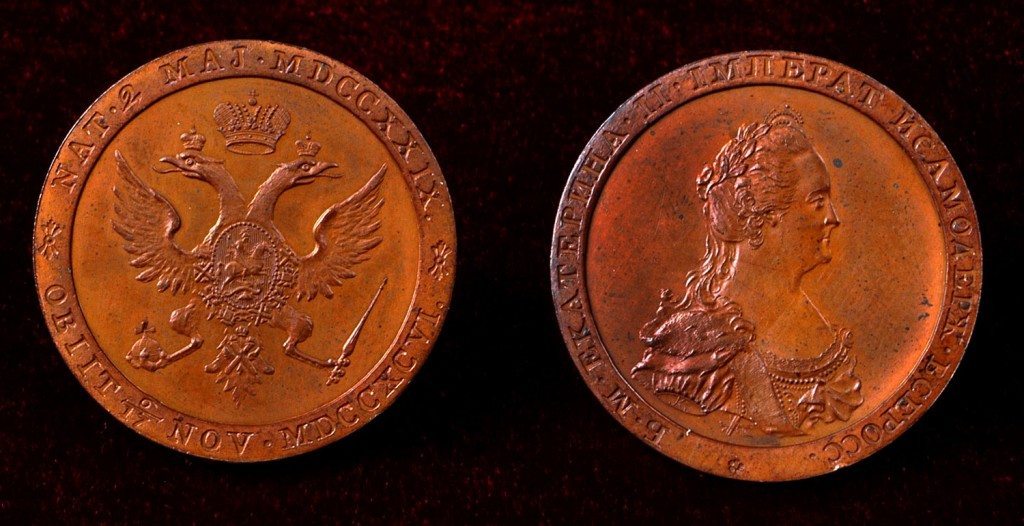 Image: Death of Catherine the Great. Double-headed eagle and bust of the monarch. 1796. Designed by Conrad Heinrich Kuchler.

Catherine the Great was one of Boulton’s most important customers. Over the decades he supplied her court with ormolu wares, and her last commission was the supply of machinery for the St Petersburg Mint. Her death in November 1796 caused many troubles for the Mint business, as Paul I, who succeeded to the throne, loathed his mother’s style of life and reversed her policies. In reaction, he tried to revive the memory of his father, Peter III, who had been murdered in 1762. Paul started his reign with the spectacular removal of Peter’s remains from the Alexander-Nevsky Monastery to the Peter-Paul Cathedral in the Peter-Paul Fortress, where all Russian Tsars since Peter the Great had been buried. This event was commemorated by a medal with the portrait of Peter III (by C Leberecht).

Boulton seems to have well understood the situation at the Russian Court, as in February 1797 he wrote ironically to one of his correspondents:

I have been so much engaged with /…/ trying to settle a Treaty of Amity with Paul Ist that I have not had time to think of you. /…/The Emperor to shew his duty and affection to his mother, has turned out her ministers, changed the plan of politics, countermanded his orders to me. /…/ Nevertheless I have some reasons to think he will come back again to my shop when he is crowned on the day his mother is buried.7

For Matthew Boulton it was only natural to commemorate Catherine the Great’s death with a fine gilt medal. On the obverse there is a portrait of the Empress and the inscription:
‘Б.М. ЕКАТЕРИНА II. ИМПЕРАТ. И САМОДЕРЖ. ВСЕРОСС. [By the Grace of God Catherine II Empress and Autocrat of All the Russias].
On the reverse the Coat of Arms of the Russian Empire is shown, and the dates of Catherine’s life: NAT.2 MAJ.MDCCXXIX OBIIT 6/17 NOV.MDCCXCVI [Born 2nd May1729 Died 6/17 November 1796].

In the Catalogue of the Collection of Coins, Medals, Medallions, Tokens, Dies etc. in the Assay Office (Birmingham, 1985) this medal is dated 1796. However, it was probably not Paul I who commissioned the medal on the death of his mother, nor was he likely to have been pleased with such an object. The specimen from the Hermitage catalogue is dated “c.1803”, which places it in the reign of Alexander I, the beloved grandson of Catherine the Great8 .

In the Hermitage collection there is another work of medallic art associated with the Soho Mint – a gold miniature medal intended for setting in a ring. It reproduces a carved portrait of Catherine the Great cut by her daughter-in-law, the Grand Duchess Maria Fedorovna (1759-1828) who was the wife of Paul I. She possessed significant artistic talent. Carl Leberecht gave her lessons in wax modelling, ivory carving, engraving on steel and on gemstones. Her portrait cameo of Catherine the Great was sent to J.Wedgwood to be copied in jasper. Jacob Reichel, a major collector, medallist and designer at the St Petersburg Mint (1760-1856), believed that the medal had been made on Matthew Boulton’s lathe9