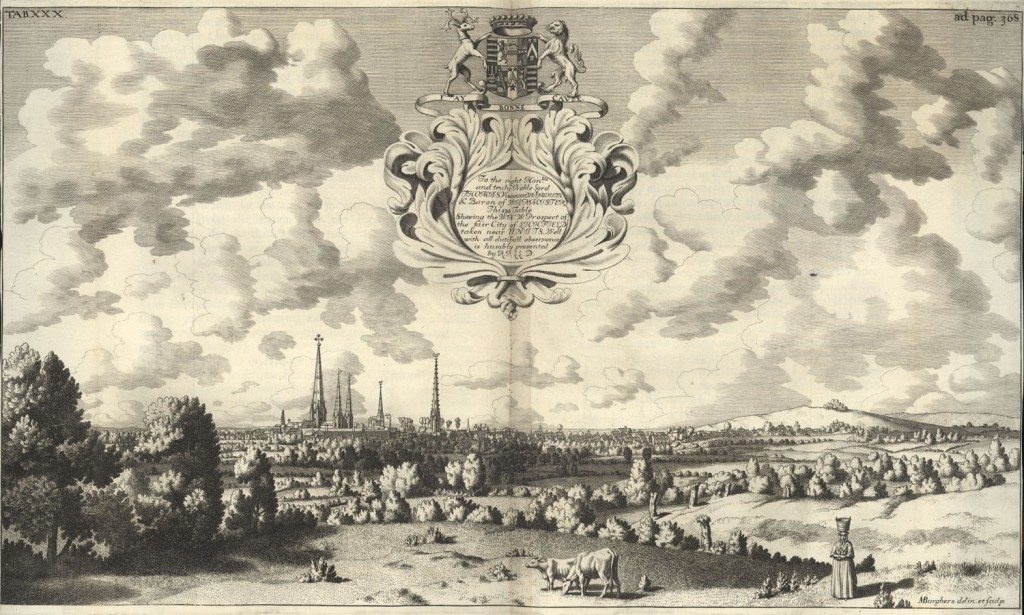 Image: Lichfield, c. 1686. This is the earliest print of Lichfield and was produced from a copper engraving by the Dutch engraver, M Burghers for Robert Plot’s, The Natural History of Staffordshire (Oxford, 1686). By this time, when Sir John Floyer was practising medicine in the city, Lichfield was already known for the quality of its water supply. Not surprisingly, water treatments featured in Floyer medical practice.

The Midlands was notable for its medical pioneers. Erasmus Darwin extended knowledge of the workings of the human body, developed new ways of caring for patients and became the best-known doctor in England at the end of the eighteenth century. William Withering, his colleague in the Lunar Society, pioneered the application of the scientific method in medicine when he experimented with the use of the drug, digitalis, to treat heart disease. Sir John Floyer is a less well-known figure, but he anticipated the work of both Darwin and Withering. Like Darwin he developed new ways of understanding the body and methods of patient care. Like Withering, he drew his conclusions and recommendations from a careful observation of his patients. Floyer was based in Lichfield, a location which provided a large number of wealthy patients, but his medical observations included the local Staffordshire peasantry and elderly gentlemen in a Lichfield almshouse. Floyer produced several publications and was particular important for his observations on the pulse, his advocacy of cold baths and his recommendations on the care of the elderly.

Next in this section »
People: Browse
Browse: Disease and Illness  |  Experimentation  |  Medicine and Treatments

Floyer and Erasmus Darwin Sources and Further Reading British Masters of Medicine, Sir D’Arcy Power (ed), 1936. Bruton E, The History of Clocks & Watches (London, 1999). Gibbs D D, “Recommendations of Sir John Floyer on the education of a physician”, “Proceedings of the XXXIII Congress of the History of Medicine”, London, 2-9 September 1972). Gibbs, D D, “Sir John Floyer, M.D. (1649-1734)”, British Medical Journal, 1969, I, pp.242-245. Gibbs, D, “Sir John Floyer, Dr Samuel Johnson and the Stanhope family: some personal and professional links”, www.lichfieldrambler.co.uk./floyer.htm Jenner, M, “Bathing and Baptism: Sir John Floyer and the Politics of Cold Bathing”, in Sharpe, K and Zwicker, S (eds.), Refiguring Revolutions (1998). Lichfield, Johnson and the Doctors. An exhibition of medical books at the Johnson Birthplace Museum, Lichfield, 7 Sept - 2 Nov 1974.  Lindsay, L. “Sir John Floyer (1649-1734”, Proceedings of the Royal Society of Medicine, Vol.44, 1951, pp.43-47. The Victoria History of the County of Stafford, vol. XIV, 1990.
Most read
Chronology of principal events that occurred during the Industrial Revolution in the West Midlands. Significant places in the historic counties of Derbyshire, Herefordshire, Shropshire, Staffordshire, Worcestershire and Warwickshire during the Industrial Revolution. Industrialists, engineers, artists, thinkers and writers who contributed to the Industrial Enlightenment, technology, art, culture, religion and politics. Explorations of industries and innovations; landscapes and localities; art and architecture; culture and diversity; and the place of the West Midlands in the contemporary world.
Revolutionary Players was developed between 2002 and 2004 and financed by the New Opportunities Fund. Revolutionary Players was created by Dr Malcolm Dick & Dr Kate Iles and managed by Birmingham Museums until 2015. Revolutionary Players is now published and funded by History West Midlands.