Home·Browse·Floyer and the Medical Importance of Bathing 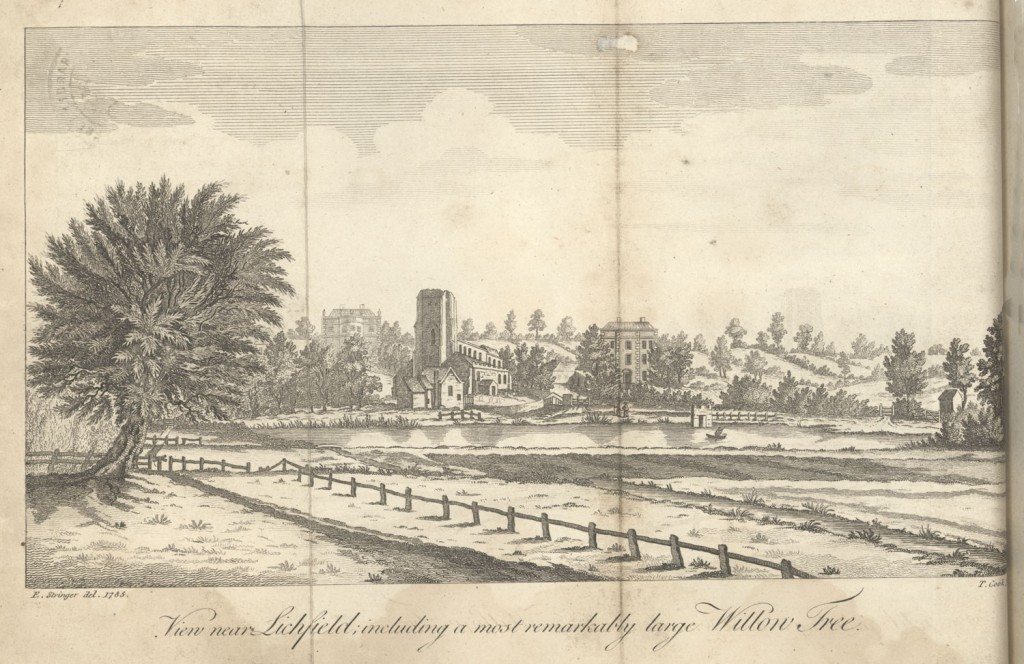 Image: Stowe Pool, Lichfield from John Jackson, History of the City and Cathedral of Lichfield (London, 1805). In front of St Chad’s Church was St Chad’s well. In 1695, Floyer recommended the medicinal quality of the water which flowed into the well from a chalybeate spring. He caused the spring to be enclosed and people went to Stowe to take the waters.

Image from: Local Studies and History, Birmingham Central Library.
Another of Floyer’s deep interests was in hydrotherapy. His library had a copy of De medicatis aquis atque de fossilibus (Venice, 1564) by the Italian physician and anatomist Gabriello Falloppio (1523-1562) which deals with the origin of springs and fossils, thermal baths and geology. His library also had a copy of The Register of Bath or, Two hundred observations (London, 1694) by T.Guidott.

Floyer travelled around the country visiting springs and wells, and documented how the local Staffordshire peasantry used certain springs. They ‘go into the water in their shirts, and when they come out, they dress themselves in their wet linen, which they wear all day, and much commend that for closing the pores and keeping themselves cool; and that they do not commonly receive any injury or catch any cold thereby, I am fully convinced from the experiments I have seen made of it.’

Floyer’s An Enquiry into the Right Use and Abuses of the Hot, Cold and Temperate Baths in England (1697) is one of his most important treatises. Although not the first English book on the subject, it can be considered the pioneer work on hydrotherapy in modern times. The book was dedicated to the Duke of Devonshire on whose land the highly praised waters of Buxton and Matlock were situated. Investigating the history of cold baths, Floyer appealed to the famous physicians of antiquity, as well as to contemporary scholars. He stated that ‘practice of cold bathing was certainly brought by the Romans into England; but it was known and practised also by the Germans, and from them it might come to their neighbours.’ He attributed the neglect of many famous waters to the Civil War, and linked the occurrence of many diseases to their disuse. Floyer prescribed cold baths as a corrective treatment for both bodily and mental diseases, and combined them with various forms of vigorous exercise such as riding, or walking in the cold air.

He also advocated cold bathing in paediatrics. He considered cold bathing particularly good for infants and young children, and insisted on a ‘natural upbringing’. Such an idea anticipated the ideals of the Age of Enlightenment, although it was placed in a very unusual context. Floyer believed that cold bathing should start as early in life as baptism, and supervised immersion baptism at Lichfield Cathedral. In 1722 he published An Essay to Restore the Dipping of Infants in Baptism, where he demonstrated that dipping is to be preferred to sprinkling. Floyer’s medical and theological views were inextricably linked.

As a trustee of the Conduit Lands, Floyer promoted a chalybeate spring at Stowe (near the Cathedral). In 1717 it was mentioned that people come to Stowe ‘to drink the waters and other diversion there to take’. He managed to persuade ‘worthy and obliging gentlemen’ to contribute towards erecting a St Chad’s cold bath at Unett’s Well at Abnalls, near Lichfield. In 1700-1703 two baths were built, one for women and one for men. They were separated by a wall, and each had a changing room. Floyer insisted that the poor and the inhabitants of the Close should be admitted free; but others had to pay.

In 1702, along with the physician and poet Edward Baynard (1641-1719) he published The Ancient Psychrolusia Revived, or, an Essay to Prove Cold Bathing Both Safe and Useful. A graduate of Leyden University, Baynard practised medicine in Bath, and also in London where he operated a cold bath. Floyer and Baynard had probably known each other for a long time, as Floyer mentioned Baynard’s assistance in his botanical work. Although many contemporaries ridiculed Floyer’s and Baynard’s book, it went through several editions and was translated into German. It might have influenced medical practice of Vincenz Priessnitz (1799-1851) who is acknowledged the father of modern hydrotherapy and the health spa movement in Europe.

Cold bathing along with sea swimming were enthusiastically supported by the future generation of Romantics, particularly by Lord Byron. He made them fashionable not only in England but all around Europe. In 1820s, the Russian poet Alexander Pushkin described his hero Eugene Onegin in a following way:

Childe-Harold-like, Eugene’s devoting
His hours to dreaming them away;
He wakes; a bath where ice is floating…

In his later years Floyer wrote a book on geriatrics Medicina Geronomica, or The Galenic Art of Preserving Old Men’s Health, published in 1724. Floyer directs the attention of his readers to the importance of fresh air, physical exercise, regular diet, and temperance in all things especially alcohol and tobacco. He relaxed some of his standards and recommended warm instead of cold baths: ‘If they are luxuries, why not for the health and cleanliness. If the English knew the use of warm baths like the Romans they would have them made in their houses.’

Floyer obviously followed his own recommendations, and their effectiveness was confirmed by Bishop Hough of Worcester (1651-1743) who wrote: ‘Sir John Floyer has been with me some weeks, and all my neighbours are surprised to see a man of eighty-five who has all his memory, understanding and all his senses good, and seems to labour under no infirmity.’

Floyer’s last medical book A Comment on Forty two Histories described by Hippocrates in the First and Third Books of his Epidemics, was published in 1726. ‘Our notions change with our philosophy, and at last we return to our old ones again; and better explain them… I will… describe the 42 stories, and in what way we may cure such Fevers by a rational Method.’