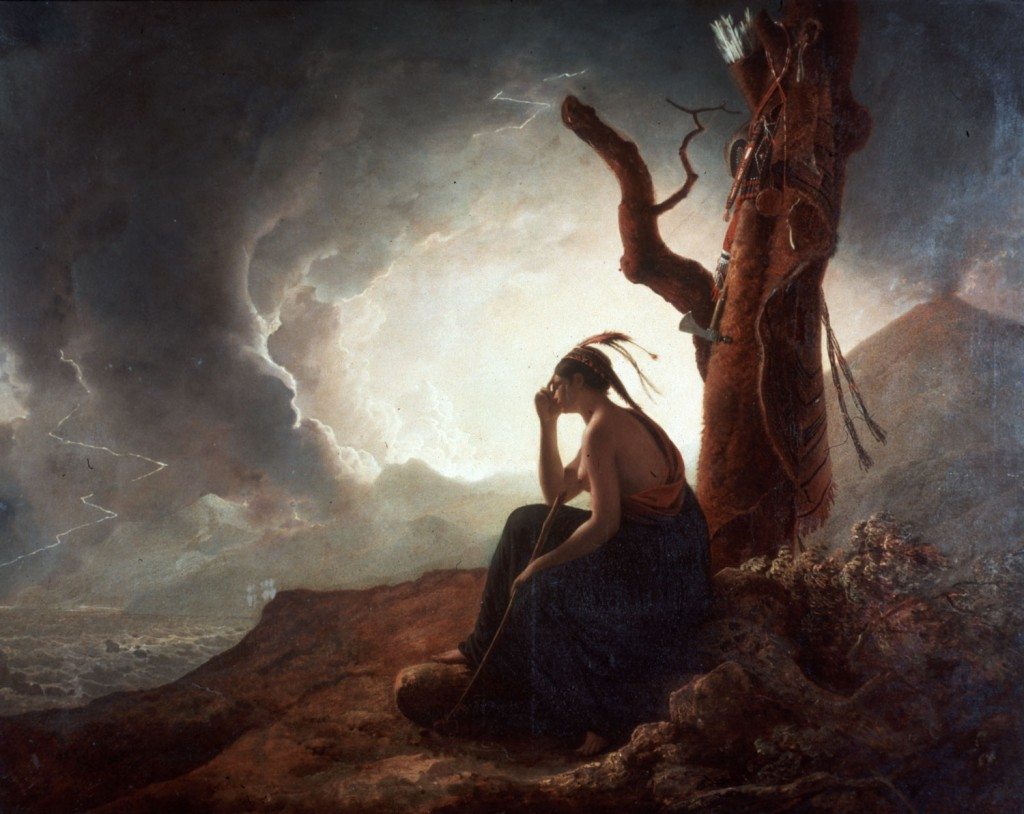 The Widow of an Indian Chief watching the Weapons of her deceased Husband (1785). Joseph Wright of Derby 1734-1797), Oil on Canvas. Derby Museum & Art Gallery.

Image: Celebration of the “noble savage” is a feature of 18th century art. In this painting of an American Indian woman, Wright does something very different. He uses a human image to comment on the transience of achievement and the fragility of existence. The widow sits stoically under a blasted tree, decked with the military symbols of status that belonged to her husband. Around her lightning strikes, a volcano spews smoke, a flood engulfs the land and the sun barely shines through a vortex of clouds. There is little sense of consolation in the picture.

2. The Philosophical Context: From Optimism to Realism

During the last two decades of the 18th century both the Old and the New World experienced violent turmoils. The season of the classic Enlightenment – daydreamer’s optimism, partisan rationalism, blind utilitarianism, compulsive anti-traditionalism – came to an end. Although we could easily doubt whether such a “classic” or “narrow-minded” Enlightenment ever existed, it is unquestionable that the Napoleonic period following the wreck of the French revolutionary ideals made visible the dangers coming from the uprooting of traditions and the simplistic worship of reason. The “tyranny of reason” was the danger Edmund Burke envisaged in his Reflections of the Revolution in France (1790), and Burke’s was but one among the several voices raised against sweeping rationalism. The effortless optimistic tone was displaced at the very beginning of the 19th century and philosophers recovered more realistic points of view and down-to-earth expectations. Despite Hegel’s opinion, Enlightenment culture was never narrowly optimistic and rigid in its attitudes. A sense of the brevity of life, human fragility and a non-consolatory worldview was deeply rooted in the Enlightenment experience.
In truth, just in order to react to a perceived chaotic reality, the standards of reason and optimism were of great interest to philosophers who in general had a keen consciousness of the fallibility of human faculties and of the fragility of human nature. Intellectual humility, pessimism, Socratic irony, awareness of the overwhelming power of history and nature over human endeavours and distrust of every speculative system, were defining tracts of “classic” Enlightenment culture, from Voltaire onwards, no less than a supposed rationalism and optimism.4
Complexity and universal ferment, not serenity and harmony, were thus the watchwords of Enlightenment. As a whole, eighteenth-century culture was clearly leaning towards realistic, less systematic and omni-comprehensive representations of the world. Hobbes, Descartes, Spinoza and Leibniz had long since disappeared. The seventeenth-century idea that the human mind could take over the actual world lost much of its strength. It is true that everybody could still remember Francis Bacon’s motto, that science is power, but Enlightenment culture perceived itself as lying faraway from this target: the dominion of science and knowledge was far from being complete. To the Enlightenment players, humans appear no less than ridiculous when they think they are the owners of their destiny. The world is basically a series of problems to be tackled slowly, not a mystery to be unveiled suddenly by some gifted metaphysician. Voltaire, for instance, was a sour detractor of Cartesian systematic thought and Friedrich Heinrich Jacobi, one of the finest interpreters of late-eighteenth-century German culture, withheld recognition to those “All-embracers” who dissolved multifaceted reality into an a priori conceptual scheme. But Rousseau, Diderot, Buffon, La Mettrie, D’Holbach and Jefferson adopted a similar position. The philosophers of eighteenth-century culture turned down Cartesian “certain and perfect science” (founded upon universal principles, independent of actual experiences), and clearly preferred to follow the road opened by previous theoretical entrepreneurs, by Mersenne, Roberval, and Newton, for instance.5
It is worth remembering that the Enlightenment was empirical and tentative, not rationalistic and systematic, in its fundamental character and in its historical outcome. Within this frame of reference, the proclaimed confidence in human reason is not dependent on a firm belief in the full transparency of the world to the human mind. In the same way optimism has been a reaction to a world experienced as basically menacing, rationalism is an exhortation, a prophylaxis for preventing fear and anxiety and a rhetorical strategy to increase human hope. During the Enlightenment, the scientist-philosopher becomes a traveller who explores an unknown land with patience and fortitude. Philosophical knowledge itself turns out to be an experience besides other “human” experiences. Religion, literature, politics, ethics, medicine and industry are but useful ways in which humans could continuously re-describe themselves, in the hope of improving their situation.
In all its wide semantic range, “attempt” is the sound basis of the Enlightenment, in particular in its later forms. “Attempt” means at once an act whose result is uncertain and an endeavour, a challenge. “Sapere aude”, dare to know, was the Roman poet Horace’s line chosen by the German philosopher Immanuel Kant to incite humans to construct their future, that is, an improved earthly destiny. The counterpart of optimism, it is an exhortation and a wish: “dare!” As such it reveals in which terms Kant and other Enlightenment philosophers considered the way humans usually dwell in the world. It reveals an implicit philosophical anthropology. A being exhorted to start improving its condition is a being lying on the borders of reality, a peripheral creature lost amidst the world, full of potentiality, and hence still lacking in actuality and success. Somehow, who is pushed to embark on a venture has to experience a strong sense of his own future and cannot already be satisfied, self-centred, and self-celebrating.6 Urging humans towards their future, by means of neverending new experiences, the Enlightenment achieved the project already created by Newton and Locke. It rejected both the Cartesian ego, source of every evidence and value, and the Christian spiritual self, a pre-formed spirit who has merely to resist the temptations of the material world.7