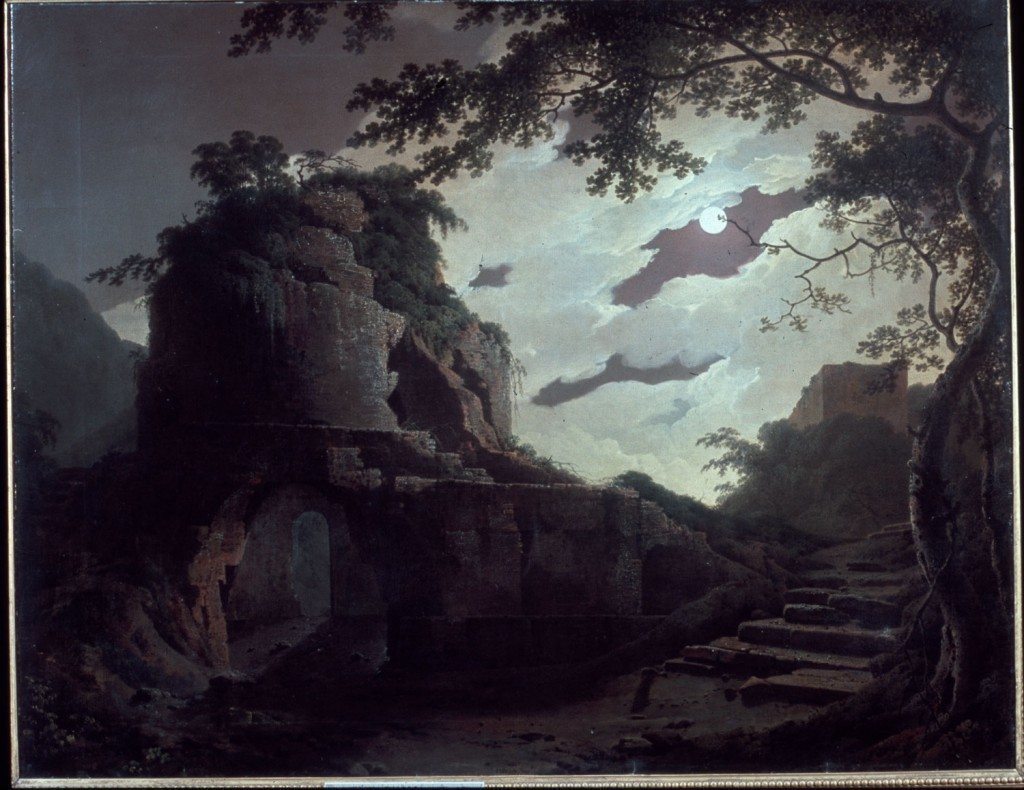 Wright painted several versions of this scene, believed to be the tomb of the Roman poet, Virgil located above the Grotto of Posillipo in Naples. It was a stopping point on the aristocratic Grand Tour and therefore provided a concrete example of the classical world for wealthy young men who traversed southern Europe as part of their education. Wright’s interpretation of the scene does more than portray a picturesque ancient monument. He invests it with a disturbing grandeur. The tomb becomes an overgrown darkened cave. The lunar light provides a glow which barely illuminates its entrance. Darkness and uncertainty lie within the worlds of Ancient Rome and the 18th century Enlightenment, a message that was understood by Priestley and Darwin.

In speaking about the Enlightenment, in particular that peculiar form of Enlightenment embodied by the Lunar men, we have to be extremely careful to avoid the over-simplification made by Johann Joachim Winckelmann, the famous German philosopher and art-historian. He claimed that ancient Greece was everywhere suffused by joy and serenity, that statues were basically uncoloured forms and that Greek artists were lacking in dreadful sentiments and emotions.30 Accordingly, Lunar men were not only champions of optimism and industrial heroes who devoted all their energy to shape a new harmony. It is true that they reinvented classicism. Josiah Wedgwood (1730-1795) at his “Etruria” factory, copied some artefacts retrieved during the first archeological excavations, the Portland Vase for example, and thanks to the contribution of Matthew Boulton (1728-1809), at Soho, he helped to diffuse a British taste for a neoclassicism. Darwin and Priestley were in turn formed on neoclassical standards. Engravings, allegories, Arcadian myths and pathetic fallacies are scattered in several of their works.31
However, this “recovered” classicism and the praise for harmony are in the first instance a sentimental journey, a homesickness for an imagined antiquity, and the outcome of a picturesque mood.32 The more they behave in accordance with a “neoclassical” order, the more they betray a gap. In particular, coming across the works and the whole cultural experience of Darwin and Priestley gives us the opportunity to enshrine a large truth. The West Midlands Enlightenment was not completely in consent with itself and it cannot be simply interpreted as a new form of classicism. It is unquestionable that Priestley pictured intelligence and human order endlessly prevailing over brute materiality, thanks to a divine direction.33 He pledged himself to spread harmony and reasonableness. Darwin, in turn, painted an optimistic, naturalistic and this-wordly picture based on evolution: “Darwin and his peers presented a man-centred view of man making himself – a Promethean vision of infinite possibilities.”34 But infinite possibility involves an infinite deficiency, and a boundless improvement implies present boundless needs. Darwin’s evolution implicitly assumes the continuity between animals and humans, and admits that in “man” operates the brutal fecundity of nature: “one great Slaughter-house the warring world!”35 For his part, Priestley was not a poet, although in his prose works matter shines like a powerful and disquieting prophecy – materiality means mortality. Priestley’s taste for classical harmony, then, was badly fitted to a man who ironically declared to have often embraced “il lato eterodosso in quasi ogni questione.”36
In every realistic inquiry, progress and decay necessarily face each other. Lunar men applauded progress and human intellect with the analogous intensity they employed to remember the individual’s transience, mortality and failure: “Hear, O ye Sons of Time! your final doom,/ And read the characters, that mark your tomb”.36 The materialistic point of view which buttressed the ideology of the Industrial Revolution reveals at the same time the abyss of darkness which opens beneath human existence and discloses the tragic awareness of the depth of past and future times. Priestley stated that death is not, as Christianity has portrayed it, simply the threshold to futurity. Since we are fundamentally matter, death is something to which we are exposed. Moving from a corresponding materialistic worldview, Darwin depicted hallucinatory and subconscious worlds which compare with William Blake’s:

“Thus the tall mountains, that emboss the lands,
Huge isles of rock, and continents of sands,
Whose dim extent eludes the inquiring sight,
ARE MIGHTY MONUMENTS OF PAST DELIGHT.”38

If, as Enlightenment thinkers, Darwin and Priestley acclaimed progress and civilization, the “Reason’s empire o’er the world”, if they supported the eighteenth-century project of ordering, naming and classifying, they were driven to do so not by a self-confident and a classical serenity but by a fundamental anxiety and a fear of darkness. They helped further generations to open their eyes to new forms of the philosophical materialism. They gave new meanings to old notions of matter and supported the claim of the essential material nature of the human beings. For this reason, Darwin and Priestley were fearful about the weakness of the individual ego or spirit. Universal ferment and complexity, awareness of risks and transience, not harmony and serenity, were the watchwords of the late Enlightenment. And Darwin and Priestley were the living demonstration of the truth of this thesis.