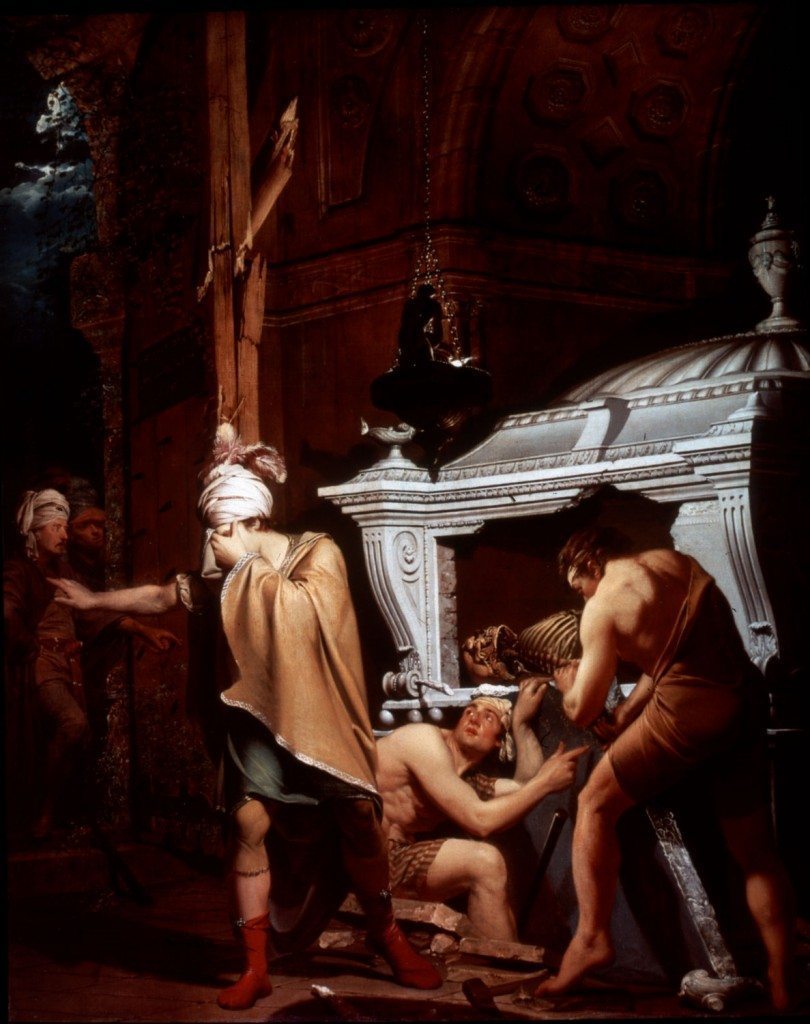 Image: Miravan Breaking Open the Tomb of his Ancestors is one of Wright’s overtly allegorical paintings. Wright describes the background in his notes. It describes the story of Miravan, a young man who came across a tablet on the chamber of the tomb of his ancestors which announced, “In this tomb is a greater treasure than even Croesus possessed”, a reference to the fabulously wealthy king of Lydia in Asia Minor who died in about 546 BC. The canvas shows Miravan’s discovery. Instead of gold he found bones and another inscription on the slab held by the men on the right “Here dwells repose. Sacriligious wretch, searchest thou for gold amongst the dead! Go son of avarice – thou canst not enjoy repose.” Miravan has exercised free choice, but his avaricious pursuit of gold has led him to discover that death is the ultimate reality. He has lost the real treasure that life brings, the eternal repose that follows a good life.

During the 18th century intellectuals rediscovered that the human being is not just a spiritual being which resides in body, but is entirely a material entity.8 “Body” and “matter” are notions which, for the very first time in a major way, contribute to define the proper essence of men and women. They are no longer seen as an “obstruction”, an “impediment”, a “clog” to the spirit, a source of all vices and disorders or a dead and torpid substance. Body and matter become what we properly and essentially are.9 A follower of Hartley’s physiological theory, Joseph Priestley is in this sense highly representative. “Philosophers have given too little to matter, in divesting it of all powers”, Priestley maintains.10 Christian orthodox spiritualism affected a big part of western philosophy and for this reason Descartes, Pascal and Andrew Baxter, could easily find in that tradition several hints to support the thesis of the immaterial active thinking principle in man. But because matter is no more described as a passive substance, the idea of a spirit as essentially different from it falls to the ground. Humans are no longer “actuated” by a heavenly principle distinct from the body, Priestley claims.11 The powers of sensation, perception and thinking may also belong to the same substance that has also the properties of attraction, repulsion and extension and humans are but “organized systems of matter”.
Priestley’s discovery of the body involves an emphasis on transience and mortality. The system of materialism and philosophical necessity that Priestley strenuously maintained, urged him to consider “man” as “no more than what we now see of him. His being commences at the time of his conception, or perhaps at an earlier period. The corporeal and mental faculties, inhering in the same substance, grow, ripen, and decay together; and whenever the system is dissolved, it continues in a state of dissolution, till it shall please that Almighty Being who called it into existence to restore it again.”12Resurrection and a future life completely depend on the free choice of God, not on our being a supernatural soul.
Contrary to God-like spiritual beings, humans as such have no titles to an after-life. Because of his yearning for a pure ideal world, Plato, Viscount Bolingbroke mantains, is but “a bombast poet and a mad theologian”.13 Priestley agrees. In general, Enlightenment culture refused to acknowledge a debt to Plato and his metaphysical visions. A deep realism even though it was itself a metaphysical doctrine contrasted with Plato’s otherwordly mysticism. Plato seemed puerile, whimsical, full of unintelligible jargon.14
Humans were compelled to live as if there were no truer, spiritual, other-worldly existence. The main lines of a new tradition-free anthropology are here clearly drawn: “Man”, said Priestley, is “no more than what we now see of him”. The adverb “now” is central, because it entails the idea of an exclusive material presence of human beings on earth. We are mortal, we are our body, and, furthermore, we have to be our world. This revaluation of body and matter does not simply entail a process of secularization. Matter and the earthly world become sacred since God chose to create them and, Priestley admitted, actively wished them.15
Because matter is something more than an impediment it could be appreciated in terms of the positive limit or the visible shape of the so-called “spirit”. Being in consent with matter and body is the way one can affirm ones own presence and individuality. In France as well as in England, Enlightenment culture was always suspicious of the ascetic contempt for materiality and “mundaneness”. This is but the collateral effect of what I have called a “realistic” world-view. Darwin, James Keir remembers, “despised the monkish abstinences and the hypocritical pretensions which so often impose on the world.”16 And Priestley could merrily echo with an equivalent statement: “The opinion of the great value and importance of bodily austerities came from the heathen philosophy” and hence it is unsuitable for a sound “Christian”.17 This not only emphasizes a conventional pleasures such as eating and drinking. Going behind the letter of such declarations, we could discover a philosophical worship for materiality. Matter by itself is a value and improving matter is the best chance a human being has to leave a visible trace and to create a future. At the end of the eighteenth-century the theory of the improvement of matter is thus a secular substitute for the traditional belief in the after-life.