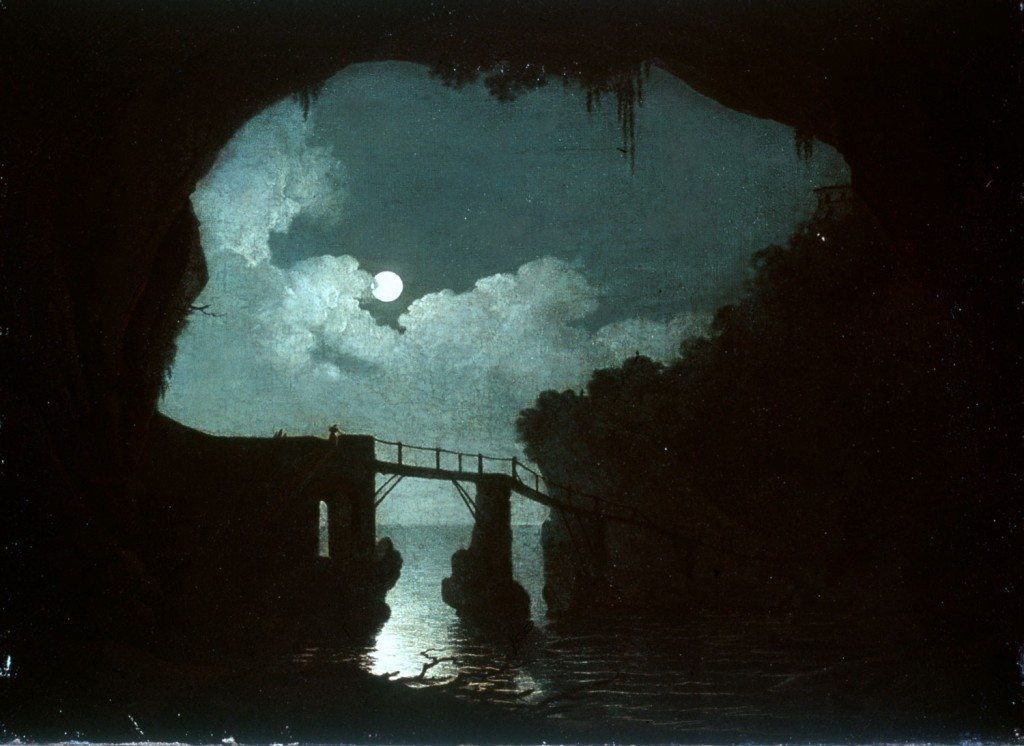 Wright visited Italy in 1773-1775 and Bridge through a Cavern, Moonlight is one of several scenes he painted of the Naples area. Wright was fascinated by caves and caverns. He explored them artistically whilst his Lunar friends, John Whitehurst and Erasmus Darwin researched them scientifically. Wright investigated through the medium of paint the world which Darwin and Priestley probed philosophically, the relationship between darkness and light.

Lunar men, Darwin in particular, actively looked for a personal commitment to materiality.18 Earth was the source of neverending images. “Matter” was but another name for an original matrix, a creative chaos or “broth” whose bits and pieces are scattered everywhere. After an excursion into a cave called “the Devil’s Arse”, near Castelton, Derbyshire, Darwin could not easily hide his excitement for having been “into the Bowels of old Mother Earth”, “into the Regions of Darkness” and having seen the “Goddess of Minerals naked, as she lay in her inmost bowers”.19 Years after, in The Loves of the Plants, in The Economy of Vegetation and especially in The Temple of Nature, the poet could not resist the allure spreading from the living Mother Earth, a queen who takes over “immortal matter”, “unchanging but in form”, lifting her primeval power in order to give birth to life.20 At the top of his mystical, heathen wonder, nourished by Romantic images, Darwin makes out that the “wrecks of Death”, in nature, could not actually hamper the perpetual youth of life. Matter is the leading actor yet again: “Emerging matter from the grave returns,/ Feels new desires, with new sensations burns”.21
In addition, Darwin’s rapture for materiality is completely in tune with the new discoveries of contemporary physiology. John Hunter, from Scotland, Albrecht von Haller and Johann Friedrich Blumenbach, from Germany, turned down Cartesian mechanicism as unable to explain the features of living matter. From crystals to animals, matter shows an astonishing power of self-organisation. It is true that the “soul” and other spiritual qualities have been banished from Enlightenment natural philosophy, but Hunter, Blumenbach, and Haller, like Darwin and Priestley, could not oppose a new vitalistic conception of materiality. No more than matter, the living and active stuff could grow per se, thanks to a spontaneous and enduring stream and without any supernatural intervention. As Roy Porter cleverly noted, in these years “seemingly paradoxical, vitalism was thereby recruited to bolster materialism.”22
Thanks to Priestley, the doctrine of materialism acquired unheard-of scientific importance and especially a new figurative strength. It became a prop of a revolutionary radicalism intended to turn the social and scientific world upside-down.23 In Priestley’s mind, traditional hierarchies did not hold anymore. “Matter is life”, “matter is active”, “matter is not a principle opposed to thought”, are mottoes which abundantly ran all along seventeenth and eighteenth-century British culture, from Locke onward.23
However, at the end of the century matter was no more simply the “substance” which everyone thinks to be extension, solidity, impenetrability, vis inertiae. In Priestley’s thought, matter was not a substance anymore. On a metaphysical level, Priestley completely rejected the traditional notion of substance and turned out to be a sheer phenomenist: matter is an explanatory principle, a word which we cannot leave out when we think, although we completely ignore its nature and its secret essence.25 The Cartesian split between an active res cogitans and a passive res extensa fell irreparably down not because Priestley maintained that all reduces to matter. Priestley openly defended “a very different kind of materialism from that grosser sort”.26 More than the first receptive substratum, matter is the conceptual starting-point, the omnipresent “myth”, an invisible point from where all our discourses flow, a quid unknown in itself but well known in its effects. Whatever it is, matter manifests itself like spirit and vice versa. Priestley claimed for the spiritualization of matter, i.e., for considering matter in terms of a primeval force. Matter is not a dead object. It is a never-ending power, something which is already life and spirit. As a speculative philosopher, Priestley saw matter as omnipresent, but dreadfully unfamiliar: pure effect, pure life, pure activity, pure revolutionary energy.
Some syllogisms come out unbound: we are matter, matter is energy, we are energy; we are matter, matter is in itself unfamiliar, we are partly unfamiliar to ourselves. Priestley thus overturned the traditional philosophical belief of a dichotomy between matter and energy. According to Priestley, matter and energy are both the sum of what we are aware of, a secularized reality, but much more than this. If speaking about matter involves speaking about a substantial mystery, the whole eighteenth-century materialistic culture, Darwin and Priestley in particular, did not definitely wipe away the frightful obscurity, the original nightmare of human culture. On the one hand, they wished to wipe away obscurity, but in the meantime they admitted that they were attracted by Henry Fuseli’s portraits of ghosts, incubi and succubi. They were seen as a dimension of energy entailed in matter. Priestley confessed having read the account of the man in the iron cage in John Bunyan’s Pilgrim’s Progress during his childhood “with the greatest perturbation”. The memory of that “state of ignorance and darkness” gave him “a peculiar sense of the value of rational principles of religion”.27 The keen sense of our physical proximity to ignorance and darkness, plus the dialectic between darkness and light, could not be ignored. Wishing to erase and repudiate obscurity (and hence implicitly admitting its efficacy) points out a sublime contradiction of the late eighteenth-century Enlightenment. Notwithstanding Darwin’s and Priestley’s exceptional scientific discoveries, they perceived the world as a mystery, like looking through a glass darkly. As Jenny Uglow observes, “medicine was a saga of bleeding and blisters; chemistry a matter of green fumes and red fumes”.28 Enlightenment rationality has its perennial verso in the same way the night mirrors its recto during the daylight. It is gratuitous to argue that Enlightenment was not fascinated by obscurity, secret powers, and the strength of the extraordinary.29