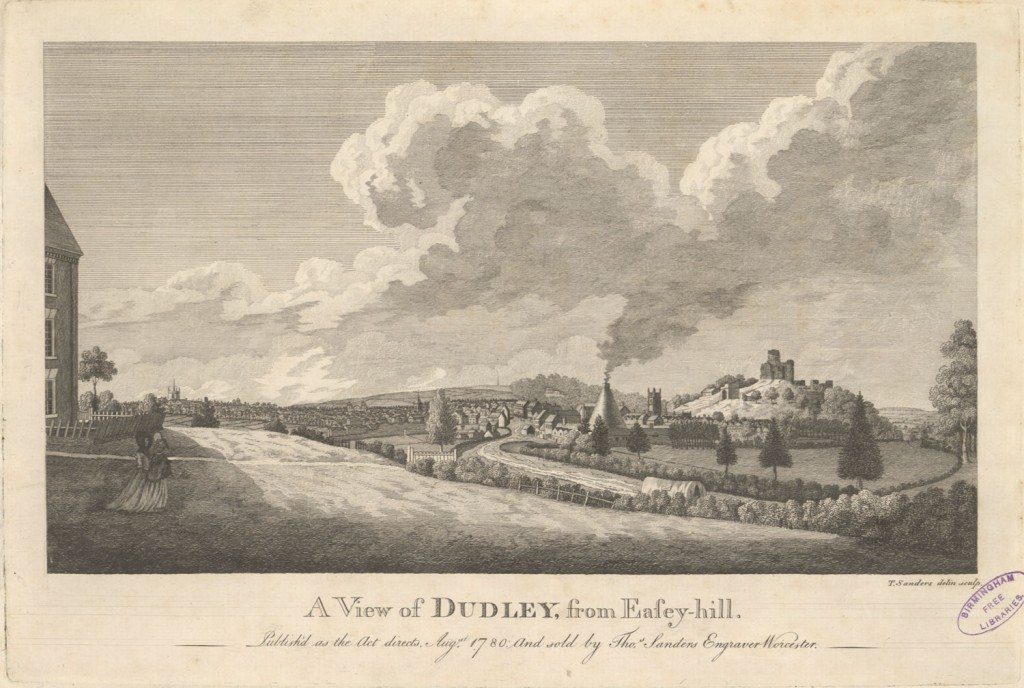 Dudley Castle Hill is a dominant geological feature of the Black Country, which enabled 19th observers to describe the industrial landscape of the region. This print, dating from 1777, shows Dudley as a small town in a largely rural hinterland. It does reveal however the presence of industrial activity, strikingly illustrated by the plume of smoke issuing from the kiln.

The history of the Black Country during the Industrial Revolution was determined by its geology. Its geographical limits have been differently located by Elihu Burritt (1868), S H Beaver (1945) and Walter Allen (1946), but it is probably safe to identify the region with the modern metropolitan boroughs of Dudley, Sandwell, Walsall and Wolverhampton, most of which were formerly part of North Worcestershire and South Staffordshire. Dominated by a range of hills and surrounded by green space, it was the geology of the area which determined its industrial development. The Black Country contained Europe’s thickest coal seam, the Thirty Foot Seam which was easily mined close to the surface. Other resources included iron ore for furnaces, limestone which was used as a flux to remove impurities in the process of smelting iron, sand for cast-iron mouldings, Etruria Marl, a clay for brick-making, sandstone for building and Rowley Rag for road construction.

A rocky ridge stretched from Turner’s Hill, Rowley Regis along Dudley Castle Hill and Wren’s Nest to Sedgley Beacon. It provided a viewing platform for observers of the area’s industrial activity. In 1830 the young James Nasmyth (1808-1890), the inventor of the steam hammer, recorded his impressions from Dudley Castle:

Melancholy grandeur is rendered all the more impressive by the coal and iron works with which it is surrounded…The venerable trees struggle for existence under the destroying influence of sulphuric acid; while the grass is withered and the vegetation everywhere blighted. I sat down on an elevated part of the ruins, and looked down upon the extensive district, with its roaring and blazing furnaces, the smoke of which blackened the country as far as the eye could reach; and as I watched the decaying trees I thought of the price we had to pay for our vaunted supremacy in the manufacture of iron.