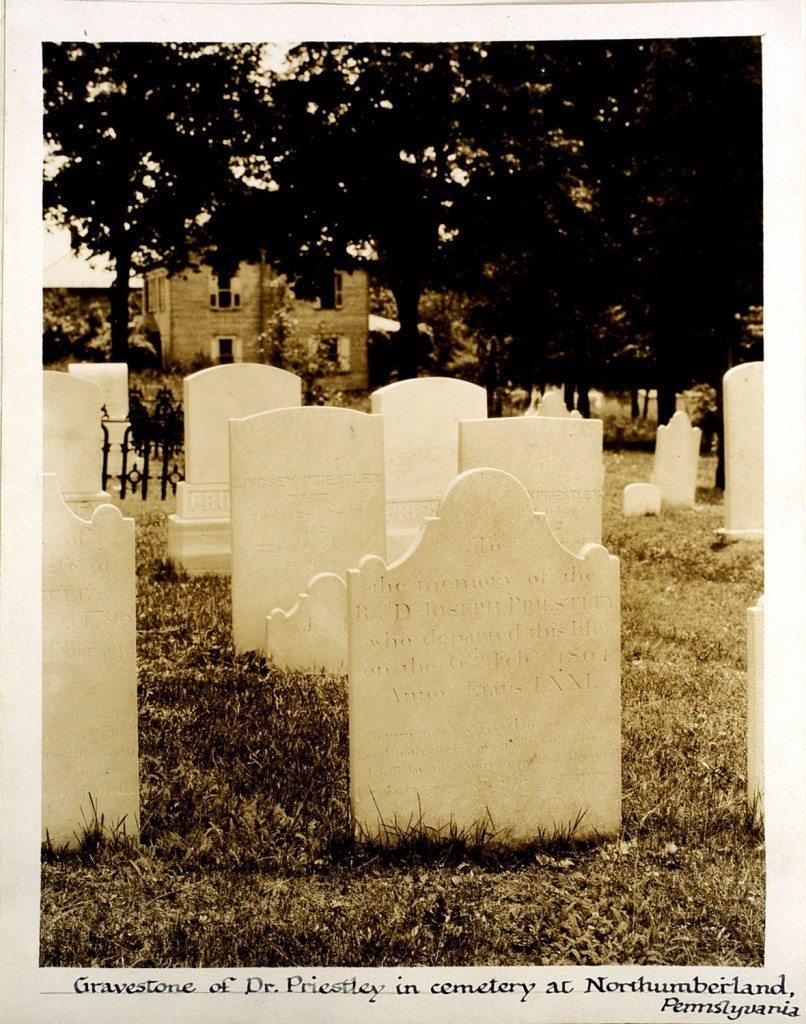 Image: Gravestone of Dr Priestley in the Cemetery of Northumberland, Pennsylvania. “To the memory of the Rev Dr Joseph Priestley who departed this life on the 6th February 1804, Anno Etatis LXXI. “Return unto thy rest O my soul for the\Lord has dealt bountifully with thee. I will lay me down in peace & sleep till I awake in the morning of the resurrection.”

Priestley’s personal life was affected by the death and departure of most of his family. In 1795, Henry, his youngest son, died of a fever and his wife, Mary, died of tuberculosis on 17 September in the following year.14 She had been particularly adept at managing Priestley’s household since their marriage, which had allowed Priestley “to give my whole time to my pursuits, which was an unspeakable advantage to me.”15 In 1800, another son, William, left Northumberland for Louisiana with his wife, Margaret. Amongst his immediate family, only his son Joseph remained with him until the end.16

On 3 February 1804, Priestley started to conduct a scientific experiment, but he was unable to complete it due to ill health and he went to bed in his library. On 6 February he dictated some revisions to a manuscript he was writing to one of his sons, Joseph. When he was satisfied with the changes he announced: “That is right. I have now done.” Shortly afterwards he died peacefully at the age of 71. His son, Joseph, daughter-in-law, Elizabeth, their children and his friend Thomas Cooper were present at his death. He was buried close to his home. Thomas Jefferson described Priestley as “one of the few lives precious to mankind.”17

Joseph Priestley the younger lived in the family home until 1811, when he returned to England. In 1874, chemists from across the United States came to the house in Northumberland to commemorate the centenary of the identification of oxygen. The meeting led to the creation of the American Chemical Society in 1876. Several families inhabited the dwelling until 1919, when it was acquired on behalf of Pennsylvania State College. In 1955, it was offered to the Commonwealth of Pennsylvania and in 1970 Joseph Priestley House was opened as a Museum. Since then a programme of activities have led to the restoration of the building and laboratory and the acquisition of period furniture and books, scientific apparatus, clocks and personal items that have a Priestley provenance. In 1994, the American Chemical Society designated Priestley’s house a National Historic Chemical Landmark.18

Joseph Priestley House provides the people of the United States with a memorial to one of the major figures of the eighteenth-century Enlightenment and a means of learning about his importance as a religious figure, scientific pioneer, educational innovator and radical political theorist and campaigner.

17 Bashore, op.cit. I am grateful to Kenneth Hudson for supplying me with copies of newspaper cuttings describing the circumstances of Priestley’s death