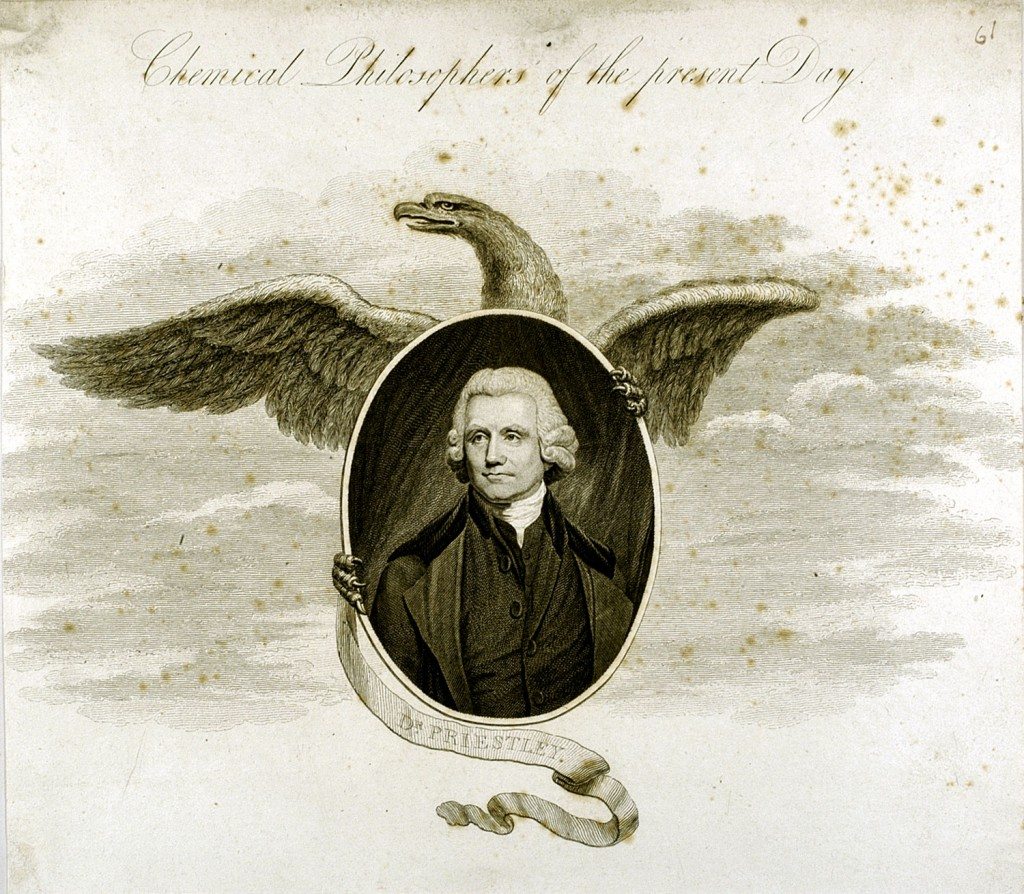 Image: Chemical Philosophers of the Present Day, Dr Priestley. The apotheosis of Joseph Priestley. The scientist ascends into the heavens with the aid of an eagle.

On 8 April, 1794, at 61 years of age, he left the United Kingdom, never to return. His house at Fair Hill, just outside Birmingham, with its library and laboratory was destroyed in 1791 by a “Church and King” mob. Though Priestley moved to Hackney, London, he was shunned by many of his former contacts and reviled in cartoons and the conservative press for his anti-establishment views and ideological sympathy with the ideas of the French Revolution. In 1793 Britain was at war with Revolutionary France and Priestley was not safe in England.

Priestley was accompanied by his wife, Mary and his three sons, Joseph, William and Henry.1 His daughter Sarah remained in England with her husband William Finch. Priestley was offered a post at the University of Pennsylvania in Philadelphia, but he turned this down. Instead, he moved to Northumberland, a small settlement of about one hundred houses which was a coach journey of seven days from Philadelphia. Priestley’s sons hoped to establish a haven nearby for English nonconformists who faced discrimination and persecution at home. For a time, this looked like a possibility, but the scheme did not come to fruition.2

When Priestley left Britain he was, in effect, a refugee. In 1797 he wrote a poignant publication which revealed empathy towards those who were in a similar position to himself. In the Case for Poor Emigrants, Priestley quoted from the Old Testament: “Thou shalt not oppress a stranger; for ye know the heart of a stranger.” (Exodus 22, 9) and “Love ye, therefore, the stranger. For ye were strangers in the land of Egypt.” (Deuteronomy 10, 19). In these verses, he claimed, Moses was calling on the Israelites, who had been refugees in a foreign land, to show compassion to newcomers. Priestley applied this idea to the people of the United States: “permit me, who am myself a stranger among you, to recommend to your favourable notice, and charitable assistance, the various strangers, or emigrants, from different parts of Europe, and the West Indies islands, who are now crowding the shores of America.”3 Many of these, like himself were escaping from persecution, war or revolution in their homelands.

1Memoirs of Dr Joseph Priestley, Written by himself (to the year 1795.) with a continuation to the time of his decease by his son, Joseph Priestley (London, H.R. Allenson, 1904, reprint of 1809 edition).

2 M. Andrea Bashore, “Joseph Priestley and His American Home” in The East Central Intelligencer, The Newsletter of the East-Central American Society for Eighteenth Century Studies, N.S., Vol. 16, No. 2, May 2002. See also Shena Mason, “Friends Re-United: Dr Priestley and the Russells of Birmingham”, above.

3 Observations on the Increase of Infidelity (Thomas Dobson, Philadelphia, 1797). Second edition. I am grateful to Gron Tudor Jones for this reference.