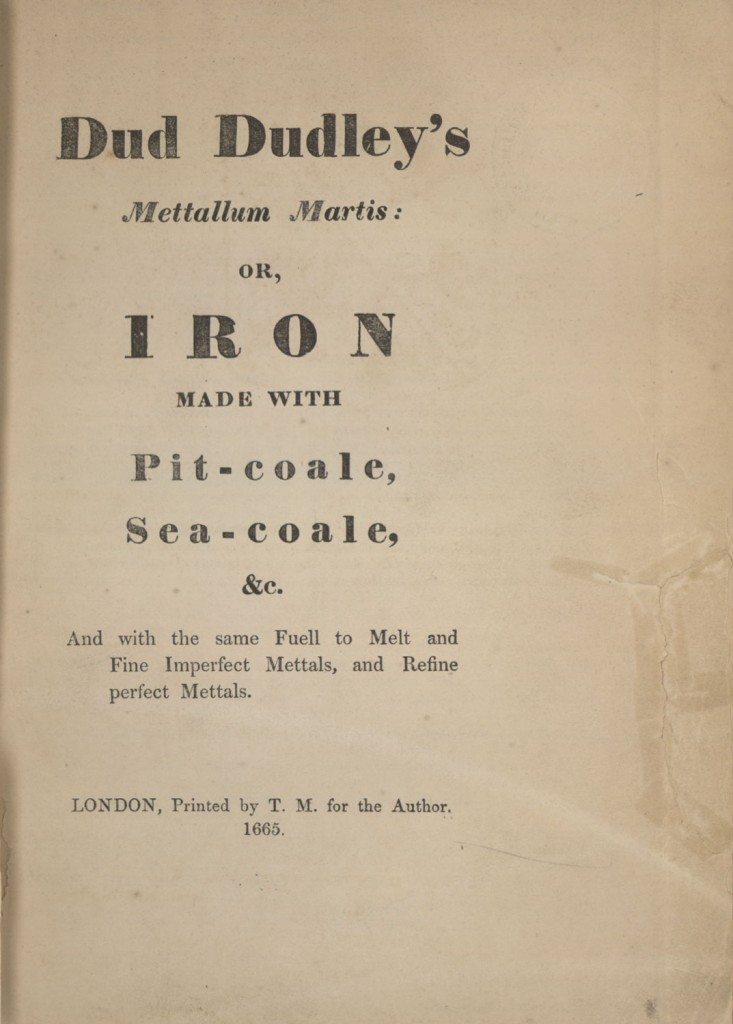 Dud Dudley was born in 1598, the illegitimate son of Lord Dudley. He attended Balliol College, at Oxford University and left at the age of 20 to take over the iron furnaces and forges which his father owned at Pensnett, near Dudley. At that time, charcoal was used as the main fuel for smelting iron, but the rapid development of the iron industry led to pressure on the supply of fuel. Charcoal was wood that was slowly burnt to remove impurities whilst retaining the carbon element. Dud Dudley claimed to have developed the use of coal for the smelting of iron. Despite applying to King James I for a patent in 1619, he was prevented from exploiting his discovery. His misfortunes included floods, jealous competitors and the English Civil War from 1642 to 1651. He lost control over his iron works.

Our knowledge of Dud Dudley is largely derived from his book Metallum Martis (1665) Dudley describes his discovery, but only in extremely vague terms. He also relates in detail his difficulties and he petitioned the King, Charles II, unsuccessfully, to restore his lands and patents.

Dudley’s furnaces and forges were largely taken over by the Foley family, a great British iron making dynasty. In the West Midlands they had interests in Herefordshire, Shropshire and Worcestershire and held contracts with the government to supply iron to the Royal Navy. Samuel Pepys who worked on behalf of the navy for Charles II makes several references to Thomas Foley in his diaries. The accounts for Philip Foley’s Stour Valley Ironworks for 1668 refer to the use of “Pit-cole”.
Traditionally the application of coke (coal with the impurities removed) is attributed to Abraham Darby I at Coalbrookdale in Shropshire where he acquired an ironworks in 1708. He may not have been the inventor of this process, if Dud Dudley and the Foleys were using “Pit-cole” to smelt iron in the 17th century. Interestingly, Abraham Darby I was born in Dudley in 1678 and apprenticed to a maker of malt mills in Birmingham. He would have had ample opportunity to learn about iron making as a young man.

Download PDF of article
Sources and Further Reading Dudley, Dud, Martellum Martis. (Reprint of 1665 edition)
Most read
Chronology of principal events that occurred during the Industrial Revolution in the West Midlands. Significant places in the historic counties of Derbyshire, Herefordshire, Shropshire, Staffordshire, Worcestershire and Warwickshire during the Industrial Revolution. Industrialists, engineers, artists, thinkers and writers who contributed to the Industrial Enlightenment, technology, art, culture, religion and politics. Explorations of industries and innovations; landscapes and localities; art and architecture; culture and diversity; and the place of the West Midlands in the contemporary world.
Revolutionary Players was developed between 2002 and 2004 and financed by the New Opportunities Fund. Revolutionary Players was created by Dr Malcolm Dick & Dr Kate Iles and managed by Birmingham Museums until 2015. Revolutionary Players is now published and funded by History West Midlands.