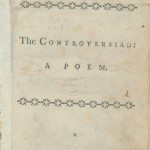 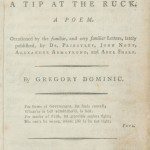 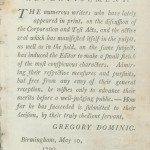 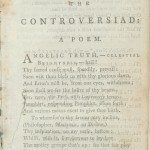 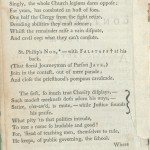 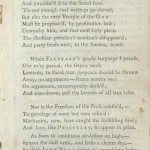 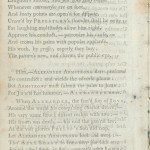 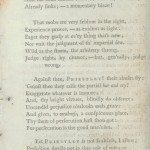 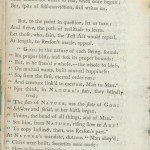 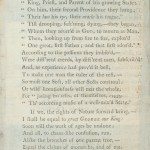 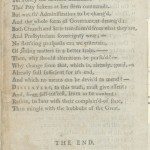 Frontispiece of the Controversiad by Gregory Dominic.

THE CONTROVERSIAD;
OR,
A TIP AT THE RUCK.

For forms of Government, let fools contest;
Whate’er is best administered, is best:
For modes of Faith, let graceless zealots fight;
His can’t be wrong, whose life is in the right.

BIRMINGHAM; PRINTED: – AND SOLD BY ALL THE BOOKSELLERS.

THE numerous writers who have lately appeared in print, on the discussion of the Corporation and Test Acts, and the active zeal which has manifested itself in the pulpit, as well as in the field, on the same subject, has induced the Editor to make a small sketch of the most conspicuous characters. Admiring their respective measures and pursuits, but free from any envy of their general reception, he wishes only to advance their merits before a well-judging public. – How far he has succeeded is submitted to their decision, by their truly obedient servant,
GREGORY DOMINIC.

ANGELIC TRUTH, – CELESTIAL BRIGHTNESS, – hail!
Thy sacred cause must, speedily, prevail;
Soon wilt thou bless us with thy glorious dawn,
And Error’s mist be, from out eyes, withdrawn;
Soon shall we see the lustre of thy beams;
For, now, the Press with Controversy teems:
Pamphlet, responding Pamphlet, issues forth;
And various means exert to give thee birth.
To whomsoe’er thy favour may incline,
(Philosopher, Mechanic, or Divine,)
Thy inspiration, on my verse, bestow;
Whilst, with it, I endeavour to lay low
The motley groupe that’s up: see that fair play
Be going on; whilst, thus, I bowl away.

PRIESTLEY, – the fam’d, the learned, and the sage; –
PRIESTLEY, – who shines, the NEWTON of his age: –
Singly, the whole Church legions dares oppose;
For years, has combated an host of foes.
One half the Clergy from the fight retire,
Dreading abilities they must admire;
Whilst the remainder raise a vain dispute,
And cavil over what they can’t confute.

St. Philip’s NOB,* – with FALSTAFF† at his back,
(That florid Journeyman of Parson JACK,)
Join in the contest, out of mere parade;
And close the priesthood’s pompous cavalcade.

The first, so much true Charity displays, –
Such modest meekness doth adorn his ways, –
Satire, o’er-aw’d, is mute, – while Justice founds his praise.
What pity ‘tis that politics intrude,
To mar a name so laudable and good!
For, ‘stead of teaching men, themselves to rule,
He keeps, of public governing, the school.

Where was that cool, yet firm, undaunted air,
Which conscious rectitude should always wear?
Fear! – dastard Fear! – first dictated the strain;
And introduc’d it to the sacred sane.
‘Tis not enough that writings go abroad,
But e’en the very Temple of the GOD
Must be prophan’d, by prostitution base;
Unworthy him, and that most holy place.
The christian preacher’s meekness disappear’d;
And party feuds were, in the Sanctum, heard.

When FALSTAFF’S gaudy language I peruse,
O’er ev’ry period, the satyric muse
Laments, to think that six-pence should be thrown
Away, on arguments – scarce worthy one:
And wire-drawn, past the bounds of all true taste.

Nor is the Freedom of the Press confin’d, –
To privilege of none but men refin’d:
Mechanics, now, have caught the scribbling hint;
And love, like PRIESTLEY, to appear in print.

Oppose Philosophy, with truths divine,
Whilst burnish’d wit distinguishes each line:
Familiar mirth is, in each sentence, found;
Laughter’s abroad, and Jest goes gaily round.
Whenever controversies are on foot,
And knotty points are open’d for dispute,
Unaw’d by PRIESTLEY”S thunder shall he write;
For laughing multitudes allow him right,
Approve his conduct, – patronize his cause; –
And crown his pains with popular applause.
His work, by grosses, eagerly they buy;
The pattern’s new, and charms the public eye.

Him, – ALEXANDER ARMSTRONG dares presume
To contradict; and wields the adverse plume:
But ARMSTRONG must submit the palm to JOHN;
For JOHN has humour, – ALEXANDER none.

When ALEXANDER, the fam’d son of JOVE,
Around the world his conqu’ring chariot drove; –
His very name struck distant realms with awe; –
His frown was death, – his nod the gen’ral law.
At the vast glories PHILIP’S Son did reap,
Let ALEXANDER ARMSTRONG look and weep: –
Tho’ ABEL SHARP to fame may spur him on,
ABEL, tho’ sharp, is flat, – compared with JOHN.

Tho’ whip and spur may, vainly, boast their pow’r;
Both are the transient bubbles of an hour:
And the loud tumult NOTT, himself, did raise;
Already sinks; – a momentary blaze!

That mobs are very seldom in the right,
Experience proves, – as evident as light:
Eager they grasp at ev’ry thing that’s new;
Nor wait the judgment of th’ impartial few.
Wild as the storm, the arbitrary throng,
Judge right, by chance; – but, gen’rally, judge wrong.

Against thee, PRIESTLEY! their abuses fly;
‘Gainst thee they raise the partial hue and cry!
Exaggerate whatever is impure;
And, thy bright virtues, blindly do obscure:
Uncandid prejudice o’erlooks each grace:
And gives, to weakness, a conspicuous place.
Thy share of persecution hast thou got:
For persecution is the good man’s lot.

Yet PRIESTLEY is not faultless, I allow;
Perfection dwells not in this vale of woe; –
Frailty and Error spread throughout the whole;
And PRIESTLEY’S no exception to the rule.

Too proud he is to own he ever err’d:
He, woman-like, will have the final word;
And knows not where to end, when once begun;
But, spite of self-conviction, still writes on.

But, to the point in question, let us turn;
And strive, the path of rectitude to learn.
Let those, who, fain, the Test Act would repeal,
At length, to Reason’s oracle, appeal.

“GOD, in the nature of each Being, founds
“Its proper bliss, and sets its proper bounds:
“But, as he fram’d a whole, – the whole to bless,
“On mutual wants, built mutual happiness:
“So, from the first, eternal order ran;
“And creature link’d to creature, Man to Man.”
“Not think, in NATURE’S state, they blindly trod;
“The state of NATURE, was the state of GOD:
“Self-love and social, at her birth began,
“Union, the bond of all things, and of Man.”
“See him, from NATURE rising slow to ART!
“To copy Instinct, then, was Reason’s part.”
At NATURE’S mandate, duteous “Man obey’d;
“Cities were built, Societies were made:
“Here rose one little State; another, near,
“Grew, by like means; and join’d, thro’ love or fear.

““Thus States were form’d: the name of King, unknown;
“Till common int’rest plac’d the sway in one.”
“Till then, by Nature crown’d, each Patriarch sat,
“King, Priest, and Parent of his growing State:
“On him, their second Providence they hung;
“Their law his eye, their oracle his tongue.”
“Till drooping, sick’ning, dying, – they began,
“Whom they rever’d as GOD, to mourn as Man.
“Then, looking up from fire to fire, explor’d
“One great, first Father; and that first ador’d.”*

According to the passions they imbib’d, –
Were diff’rent creeds, by different men, subscribed;
And, as experience had prov’d it best,
To make one man the ruler of the rest, –
So must one Sect, all other Sects controul;
Or wild licentiousness will mar the whole.
For “jaring int’rests, of themselves, create
“Th’ according music of a well-mix’d State.”
If we, the rights of Nature forward bring, –
I shall be equal to great GEORGE our King:
Soon will the work of ages be undone;
And all, to chaos-like confusion, run.
Alike the branches of one parent tree, –
Equal the claims of monarchs, and of me.

Whilst the DISSENTERS loyally behave,
And shew a conduct – upright, just, and brave;
To be expell’d from posts of dignity,
Seems cruel, in an eminent degree:
Yet Policy the sacrifice demands;
Tho’ Pity sickens at her stern commands.
But was th’ Administration to be chang’d,
And the whole form of Government derang’d;
Both Church and State transform’d from what they are,
And Presbyterians sovereignty wear; –
No flatt’ring prospects can we entertain,
Of seeing matters in a better train. –
Then, why should alterations be pursu’d? –
Why change from that, which is, already, good, –
Already full sufficient for it’s end,
And which no means can be devis’d to mend? –
DISSENTERS, to this truth, must give assent;
And, from self-int’rest, learn to be content:
Rather, to bear with their complain’d-of state,
Than mingle with the hubbubs of the Great.