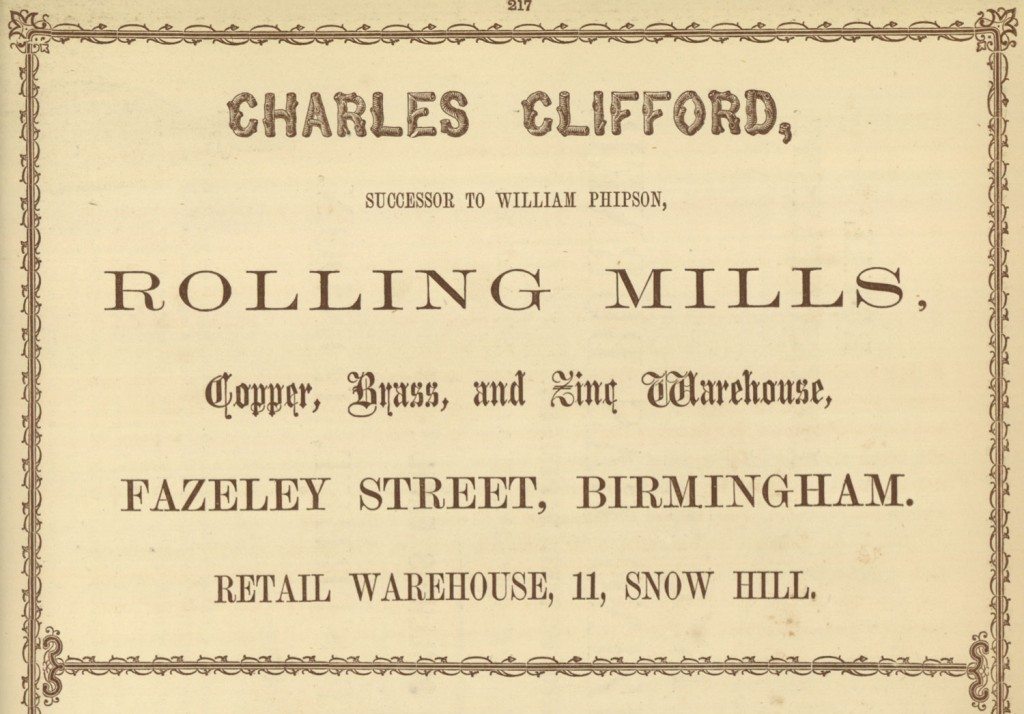 The numerous purposes for which metal is required to be laminated into sheets of varied thickness has created in Birmingham a distinct trade – that of METAL ROLLING. It would be difficult to name a single trade in which metal is used, which does not depend upon the rolling mills for its supply of suitable metal. Jewellers use gold rolled into sheets or gold rolled on ‘gilding metal’; silver is rolled either pure or is made by the rolls to adhere to a foundation of copper; the German silver of which the electro-plater makes the articles he intends to coat with a more valuable metal, must first be rolled; brass is rolled for the brass founder, copper for the brazier, Britannia metal and tin for the tin-plate worker. If the rolling mills of Birmingham were to be suddenly stopped, more than half the manufacturers must ‘op with them, so intimately do most of the trades depend upon this preliminary operation. The rolls from which rolling mills derive their name, consist of two metallic cylinders, exactly corresponding with each other, fixed in cast iron frames and made to revolve at given rates of speed by the application of steam power. Metal cast in the form of either ingots or bars, is placed between these cylinders, which by compression elongate or reduce the metal to any required thickness, determined by screws which separate the rolls or bring them closer together, as may be found necessary. In order to prevent friction, the rolls are lubricated with oil. The pressure of the rolls hardens the metal and therefore between each passage through them it is annealed by being exposed to the heat of a furnace called a ‘muffle’, which restores to the sheets the property of ductility. After and between the rolling, the metal is cleaned by being immersed in ‘pickle’ formed of various acids, to free it from the scales which oxidation has caused to form upon the surface. The more valuable metals are usually finished on ‘bright’ or polished rolls. By the action of the cylinders above described metal may be rolled into sheets as fine as the thinnest paper and may be rendered as flexible as ribbon.